To Kill a Horse 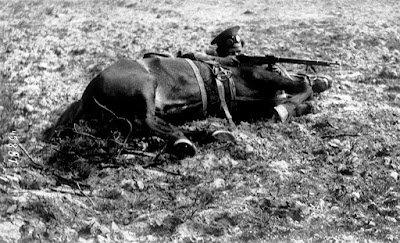 
As the Lame Cherry has noted, history has never chosen to show the grimmest nature of war in the horses and mules, which should never have entered into modern warfare, and yet in World War II, animals were a fundamental part of Soviet and German transpiration, with Stalin still deploying the Cossacks in one of thee most asstard of wastes of life.

The German Soldiers were  forced to defend themselves against unarmed human waves, women, children and horses. It violated all sensibilities of civilized  warfare, and yet that is the abuse the Landser had to deal with.
The following is a memoir of an Austrian Landser named Joseph Allerberger. The communists were pushing the Germans very hard in retreat, and the German infantry had been pinned down in a burned out farm all night suffering attacks from Cossacks,  or horse soldiers, who had no place on the battlefield.

The information which this Obergfreiter provides though is something to not be lost on history, because as a Marksman in dealing with Russian supply trains, he literally knew how to kill horses with effect. If the Marksman wanted to drop a horse in it's tracks, usually  pinning the rider, the shot was the breastbone. If it was a cavalry unit, the shot was the kidney or gut, as the horse would then buck to dislodge the rider.

That is something which always befuddled me in reading of the Indian  Terror wars in America, in the US Army never seemed to shoot the bigger target of the Indian horses, but wasted ammo on the lithe Indians. Shoot the horse and your ability to shoot the warrior increases 500 fold. Shoot the horse and your odds at hitting the target increases 12 fold, compared to that of a human.

In this attack, Marksman Allerberger's duty was to kill the horses, thereby leaving the Cossacks to be shot by the Landsders he was protecting. The  worst of it always arose though in Allerberger was making a breastbone shot and at the instant he pulled the trigger, the horse jumped over a corpse, so the bullet opened the gut like a fillet knife. The horse literally was pulling it's intestines out with it's back legs as it ran.

It his horrifying to do this kind of work to survive, and horrid to have an animal looking at you bewildered and suffering. Especially since horses actually do love combat and their blood gets up in battle.

The Marksman though in the next shot killed the horse with a bullet to the brain, ending it's suffering, and the Landsers followed in killing the Cossack.

Allerberger was always on the verge of insanity in horrific situations like this, as the humanity comes out in your screaming inside in "Why are these innocent animals here and I am being made to kill them".

The horror of this battle was not yet over though as the Cossack forced themselves into the German lines were hand to hand combat  was engaged with in bayonets and shovels. It was not the hand to hand, but the sounds of howling. The communists in support of their cavalry had opened up with rocket launchers, but the rockets blew up the horses instead. It was a macabre scene of bits of horses, bits of humans and bits of earth all in piles. The German artillery in thunderous resonance opened up in support too. Neither side knew for certain where the other was in this battle and in the end it was the horses which were obliterated.

Humans are their own animal to live or die, but mules and horses have been gladly replaced by engines in modern warfare. It is a testimony to history though in Custer's 7th Cavalry spearing Indian horses which sabers to the chest to Landsers shooting Cossack ponies, that animals do not belong in warfare as they may enjoy it, but they are saddest of all of the consequences.