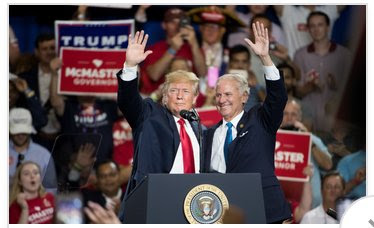 You were warned here that Donald Trump has joined the Webster Griffin Tarpley protocols to split the democratic party into Trump Sodom Socialists and Clinton Communists, and if you have been paying attention to the elections, that is exactly what Donald Trump is setting up.

If you remember Alabama in the election stolen from Christian Judge Roy Moore, how it was Mr. Trump who meddled in that election for Big Luther and the had John Kelly send in a pedo candidate so a democratic baby butcher would be elected, the same protocols have been unleashed in a number of races.

One of the telling race in this was weeks ago where the Trump people, actually backed Chantal Krebs the Secretary of State of South Dakota to take over Kristi Noem's seat, but then had a Trump officer in the race too, which split the vote, so a Mutard Obama RINO was elected for that seat.
The only reason you run three candidates in a GOP state is to kill the Conservative in the race.

You can see the Mockingbird in action on this as CIA operative William F. Buckley, whose National Review was #NeverTrump is touted as the father of the Conservative movement. Bill Buckley was Bush Obama Big Brother. He wanted conglomerates and a regime setting policies to force the public to "do the right thing", which is not what the Tea Party is for in the GOP majority.
For the facts on Buckley, he went out and DESTROYED the Conservative movement in the John Birch movement in calling them kooks, and after Barry Goldwater, it allowed Buckley to implement what is the old Whig  movement, which is Bushism which is Obamaism. Buckley then went out with Neocons like  Bill Kristol to be minders thwarting Ronald Reagan, who by the end of his second term was neutralized, and this entire Bush treacherous lot spent the next 30 years destroying Reagan Policy. Remember Jeb saying we all had to be more like Obama.

This is a Lame Cherry I  told you so in evidence. Donald Trump is assembling a socialist party, and the GOP will be turned into a 3rd rate Green Party, as you will be given the choice of sodomite socialism or Clinton communism.
The ultra Left is doing it's job and Donald John is accomplishing what the junta put him into power for. Each of you stop listening to what Donald Trump or Maxine Waters is saying, but instead observe how the elections are being manipulated in which races are being stolen and who is being installed.
Either Trump's choices win or he makes certain the People's choice is hamstrung and defeated.

No one else in anything you are reading has pointed out what is taking place. I am not a paid shill and sit around waiting for the non donors to donate, as the country goes into the chasm. 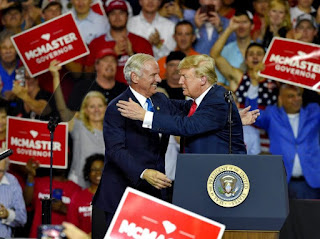 agtG
Posted by Lame Cherry at 8:21 AM