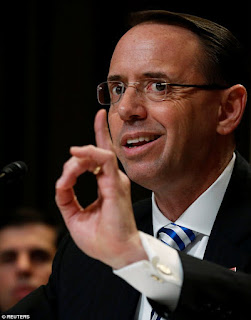 In reviewing the internal interactions of Deputy Attorney General Rod Rosenstein and Republican Congressional staffers, the Lame Cherry is frankly stunned by the Department of Justice and the FBI. The reason I am stunned is the Congressional Staffers stated that Rosenstein threatened them with criminal investigation for investigating Rod Rosenstein.

What you have to understand first in this is that Kash Patel is senior counsel is a trained legal mind. This is not some intern in the bright lights. When Patel states he was threatened, he knows this was the same bullying that Robert Mueller and his  witch hunt staff have been engaged in for over a year.

I will have the problem in all of this after this first quote.


“The DAG [Deputy Attorney General Rosenstein] criticized the Committee for sending our requests in writing and was further critical of the Committee’s request to have DOJ/FBI do the same when responding,” the committee's then-senior counsel for counterterrorism Kash Patel wrote to the House Office of General Counsel. “Going so far as to say that if the Committee likes being litigators, then ‘we [DOJ] too [are] litigators, and we will subpoena your records and your emails,’ referring to HPSCI [House Permanent Select Committee on Intelligence] and Congress overall.”


In response the FBI clarified what Rod Rosenstein was actually stating. The problem in this is the FBI is saying that Rosenstsein is not threatening Congress, but is just pointing out that Rosenstein will use the legal system to bully Congress, to make their lives legal hell and that Rosenstein put them all into prison for lying.

Rosenstein is like Bill Clinton, "I didn't rape that woman. I just didn't stop when she resisted".

Everyone knows when they are being intimidated and threatened. You know it when a cop pulls you over for nothing, and then smarts off with, "And why do you not have your seat belt on today" and then the little prick stands there lecturing you about how much he cares about dead kids in car crashes as he is looking for the biggest fine to rob you with, and then the little thug gets testy when you won't listen to his sermon and demand to know how to pay the fine.......and he retaliates by not filing your fine for a few days. It is all an abuse of power and in the country the little guys have to take it and in Washington DC, the oversight committees are supposed to cower when  Rod Rosenstein threatens them with the full power of the DOJ.

“The Deputy Attorney General was making the point—after being threatened with contempt — that as an American citizen charged with the offense of contempt of Congress, he would have the right to defend himself, including requesting production of relevant emails and text messages and calling them as witnesses to demonstrate that their allegations are false,” the official said. “That is why he put them on notice to retain relevant emails and text messages, and he hopes they did so. (We have no process to obtain such records without congressional approval.)”

This is not Justice. This is a Police State.

I found a decade old report and it pointed out that there is one gun waving cop for every 300 Americans. That is absolutely ridiculous and it leads to the arrogance the Rosenstein spews out of his mouth at Congress who are a higher authority and it explains how the DOJ and FBI have a culture of threatening everyone and not having it register in their minds they are intimidating people by design as it is their accepted culture.


In essence the excuse the DOJ is telling everyone one is that we are not threatening you, we are just tell you it is our right to threaten you. So threatening is not a criminal act, but a legal right by federal officials.

There is in the works a movement in Congress to impeach Rod Rosenstein.  Rod Rosenstein instead should be indicted on multiple counts of obstruction of justice, tampering with a federal investigation, abuse of power and making terroristic threats to Congress.


Thee absolute cancer which was on the DOJ after the Clinton and Obama years, in which the public does not trust law enforcement in the least has only been deepened this past year by the principles in Jeff Sessions, Rod Rosenstein and Robert Mueller. Currently most are in contempt of Congress or have Federal Judges forcing them to reveal information they are hiding. That is not law enforcement, that is lawlessness.


FBI agent who dropped, fired gun while dancing charged with ...

DENVER -- An off-duty FBI agent who accidentally fired a weapon that fell while he was dancing at a Denver club, wounding another patron in the leg, turned himself in to authorities and was formally charged Tuesday.

None of this helps from idiot FBI agents dancing while armed and shooting patrons accidentally to Rod Rosenstein deliberately threatening Congress now to Andrew McCabe suing the DOJ. The inmates are terrorizing the system, but the problem is they are not inmates in prison.

It is time that is remedied with putting them into prison.