Nazi's of the Reich in Bielitz Poland 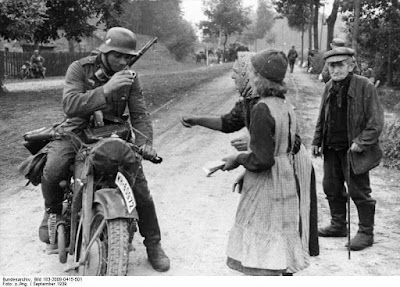 
Bielitz Poland is just outside of Auschwitz, and by the above photo in 1939 AD in the year of our Lord, the Poles were welcoming the Reich into Poland. That reality is something in the black and white propaganda of lies confuses what you have  been lied to about, but the following is an account from the memoirs of Joseph Allerberger and Austrian Marksman during the fighting retreat to keep the Soviet Union out of the civilized world of Europe.


Allerberger an the Landser infantry had taken up positions outside of Bielitz in what he assumed was an abandoned home. The riflemen were hit with nuisance attacks from the close Soviet lines, but it was a bit of a vacation from the years of hard fighting they had endured.
The Marksman had created a hide in the attic of the house, by carefully laying aside some tiles in which to shoot into the Russian lines, but as he sat there he swore he could hear a baby crying.

Leaving the hide, he went downstairs to the kitchen and discovered a cellar door, and brought in a few Landsers and called out to whoever was in the cellar to come out. in broken German an old woman replied, Don't shoot, here only woman and child".
Who appeared was the mother, grandmother and child. They were told they had to leave, but they would not as the baby needed milk from a cow, which the Germans learned had been gut injured by shrapnel and was dying slowly, but it was being kept alive for the baby.
A deal was worked out where the women would cook for the Germans and they would be allowed to stay in their home as this was the teacher from the nearby school.

The cow though soon perished from her wounds and was turned into food for the Germans as nothing was wasted on the Eastern Front.

Allerberger did his job in shooting at the communists daily and he was a bit too good at the job as usual, as the Soviets could not locate him, so Allerberger noticed a few days later a truck parked an anti tank gun near a barn. The other Soviets unloaded ammunition made possible by United States lend lease and with that Allerberger knew there was a problem which had be remedied as he could not get into a duel with a tank gun.

It was a perfect warm dry day for the shot he set upon. He fired over the head of the first gunner which at long distance struck him in the gut and he folded in half like a jack knife. The Marksman took the next communist with the same result, and a third who tried to carry a wounded away was put down.
By this time the communists had concluded they were in danger and took cover.


It was then that the real objective of Allerberger became the focus as he focused on the 20 centimeter aiming sight of the tank gun. He shot. Did not see any bullet detonation on the gun, but soon the communists were all in motion and were in the truck and drove away.
German intelligence later learned that the gun had been put out of commission.  Allerberger had done the same with tanks and half tracks earlier in the war with remarkable shots like this.

The Soviets retaliated and brought up a sniper who shot at everything, including the Grandmother in the Russian murdered her the next day. It was all the Landsers could do to restrain the daughter, but when they made her understand that she had to survive for her child, she refrained from going to her dead mother laying by the barn.

It was not long that the Russians massed for an attack and the Landsers were ordered to pull back. The mother and child chose to go with the Germans to a village they had withdrawn to. That was the fact of the reality of war and not the propaganda of what you have heard countless times in the lies that the Germans were hated, because all but the murderous communists knew the Germans were the civilized people in this war.