The Last of the Fatherland's Children of the Waffen SS 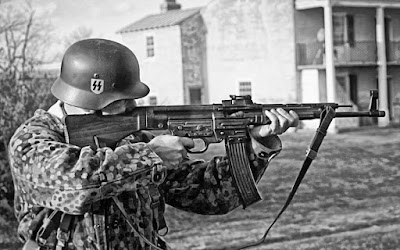 As the sun was setting on the German Reich of 1945, Joseph Allerberger whose Austrian Mountain Troops had born the brunt of the fighting since the summer of 1943 beheld a sight which made his tattered clothes and well used firearms make him pause, as Himmler's Fatherland appeared in their lines with a company of Waffen SS. The description was remarkable as the infantry had nothing for supplies and the SS appeared tailored in the late stage of the war with state of the art equipment. The reason the Lame Cherry makes note of this, is the Germans had already invented the AK 47 in 1942 in the Sturmgewher 44. The STG 44 was a most remarkable invention and weapon which predates the infamous Kalashnikov by 5 years. 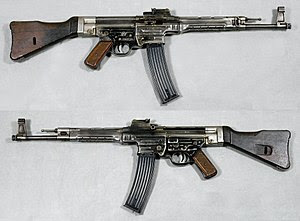 They were wearing special camouflaged smocks over their uniforms, had a camouflage cover for their helmets, and even had a veil that could be fitted around the helmet to conceal the face.
Their webbing was made of green material. Attached to it was a bayonet that could be fitted to a K98 carbine and a very practical tool set. Everyone of them had a self loading Model 43 rifle with a 4x telescopic sight. Two were even equipped with the self loading fully automatic Sturmgewher 44, fitted with the same telescopic sight as the semi automatic weapons.


They were just young boys though of 16 years of age and had only been conscripted weeks earlier. They were now deemed the elite of the German Army. There were 40 of them and a lieutenant was in command of them who cared nothing for these boys.

When they marched off to their deaths, Allerberger only thought, "poor wretches".