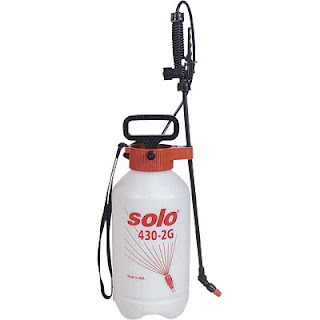 This is one of those million dollar knowledge things that only the Lame Cherry provides.


When I say Weed Sprayer, you think of a portable sprayer, which you pump up, and you spray weeds with a 2 4 D product. The thing is I have found over the years that this little thing has a number of uses and none of them have a thing to do with weeds and that is the irony of this, in you think weed sprayer and your mind shuts down in limiting what this thing can be used for.

My dad had a very expensive sprayer that ran off a pick up battery to spray our cattle in summer. Come July 4th and the small flies would be black on bull's backs. Cattle fighting flies and mosquitoes takes a terrific toll on gaining weight, so you spray them.
Being someone who is lazy, I did not want to haul that heavy ass thing and position the pick up into a corral, so I set up a weed sprayer, and I tell you this is what this thing was meant for.

What I do is load it up with diesel fuel or fuel oil, put in some bug killer like permethrin into it, and this portable sprayer will work better than a very expensive sprayer. It sure beat the hell out of a dairy barn spray in a can in which Hannah kicked at me, and Audrey swung her ass at me and tried to kick me which I did not need with my hip healing up. When I later sprayed them with the weed sprayer, they never kicked and just ran away in the pen, and I kept on hosing them down to a nice sheen of oil.
That is the nice thing about diesel in it stinks and is a good fly repellent on it's own. Get that into a barn and it keeps the flies away better than a toxic fume of pesticide.

My beloved Uncle came up with another use on these sprayers, and that was to start fires to burn off fields. It must be some dumb cluck gene as I once put gas into an oil lamp which I will not repeat as that thing got jumping before I got it out, before it exploded. He tried gas in this weed sprayer, and he said that fire followed it right up to the nozzle.  He switched to fuel oil and Lord God does that fire follow you around like a trained dog. Those weed sprayers were built to start fires.Note though metal ended sprayers are the choice as plastics will melt.

These things work great too if you got hornets. You just wait until it is cool so they are all bunged up stiff on their nest and then have at it. You can soak a site down better than a can of expensive Raid. Just remember that diesel is oil and you probably do not want that on your siding or shingles to degrade them.

Speaking of which, there is nothing like ice in winter, where a high octane salt water brine will spray nicely to bugger up the ice. I like the fine spray end, but that is just another use for the weed sprayer.

That is what I use my weed sprayer for when not spraying weeds. The thing probably has numerous other uses, but it is not like I sit around on dates with the thing dreaming up new ways to pump it up and attack some kind of nuisance situation. It is the million dollar knowledge though of the Lame Cherry, and for people with pet cows and things, nothing goes faster than this for killing biting flies.