The Queen of Heaven 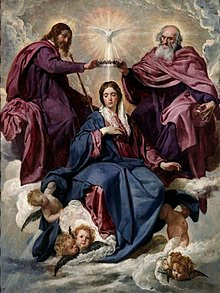 Would it be alright to call Jesus by the name of Lucifer? For a Christian that would be something repulsive, yet time and again the Vatican calls the Virgin Mary, the Queen of Heaven, and that title is an abhorrence to God the Father, as Jeremiah the Prophet railed against the Queen of Heaven.


The children gather wood, and the fathers kindle the fire, and the women knead their dough, to make cakes to the queen of heaven, and to pour out drink offerings unto other gods, that they may provoke Me to anger.


The above are covenant acts which means a contract was spritually invoked by the Jews. Yes the people you always hear are the apples of God's eye, had gotten rid of Jehovah, and were worshiping the sex goddess Ashteroth in one of her many forms of transformation, as the consort to the God of Heaven.

Now why would they be doing this?

But we will certainly do whatsoever thing goeth forth out of our own mouth, to burn incense unto the queen of heaven, and to pour out drink offerings unto her, as we have done, we, and our fathers, our kings, and our princes, in the cities of Judah, and in the streets of Jerusalem: for then had we plenty of victuals, and were well, and saw no evil.


Because they were being rewarded by this demonic entity as her protection to the Jews brought them in the short term, good harvests, health and not any mishaps came to the Jews. That was until Jehovah passed Judgment, took away His protection and the Babylonians slaughtered and enslaved them all in taking them back to their empire.

See worshiping satan does have benefits as satan gives you things, but it charges you interest in an ever increasing debt you can not pay. Try to break satan's covenant though and all ends will come to you from the murderer from the beginning.

That is why the danger of Catholics worshiping the Queen of Heaven who never was the Virgin Mary, are being involved in the worst type of sin and covenant with darkness.

The first Mariological definition and basis for the title of Mary Queen of Heaven developed at the ... as a prayer to the Virgin Mary, the Hail Holy Queen is the ...

This blasphemy stretches back from the beginning of human history in Asherah was promoted as the Queen of Heaven, and consort or sex partner of God. The Vatican has been notorious from the time of Simon Pater, the sorcerer of the Bible who went to Rome and started the universal or catholic religion, and drew in pagans who were the majority by incorporating all of their demonic rites and characters in the festivals.

Christ Mass was the Dead Sun day of December. Passover became Easter, the sex fertility goddess with her eggs and rabbits in reproduction. An entire cult sprang up concerning Mary, as the twisted Virgin Birth because Mary rose to Heaven as the wife of the Father, based on the old pagan orgies. None of it was true, but it is what the Vatican has been joined at the hip to, and the abhorrence of it is First Lady Melania Trump prayed to this demon, for an organ for a sick child in Italy, which immediately caused the death of another child in this sacrifice to save a life. God and Jesus do not murder children to get body parts.

Asherah is identified as the queen consort of the Sumerian god ... Asherah functioned as a goddess and consort of Yahweh and was worshiped as the Queen of Heaven, ...


There is not one Scripture, one statement from Christ, one Christian teaching which ever named Mary as the Queen of Heaven or sex partner of God. No Prophet by the Holy Ghost ever prophesied to pray to her, worship her, or to adore her. She has never been in a position to pray for us sinners in our hour of need, as that is Christ's office alone.

In Jeremiah though we read how the Jews who worshiped the Queen of Heaven received harvests, food, health and were protected in this black covenant. That reflects the Catholic ignorant who have their bleeding Virgin Mary tears to the Fatima fraud. The Virgin Mary is in Heaven, not bleeding tears out of paintings nor appearing to children with secrets. What this diety is, is the same one who the Jews were being rewarded by in a demon of profound power in driving fertility, health an protections from harm, as long as you pushed Jesus out of the way, which in the end gets you to hell.


The Holy Ghost gave me the Jeremiah the Prophet reading some time ago, but I did not know what to do with it. By His Inspiration I now understand in these words the message which He intended from the Father. All things are in the process of winding down it appears, and it is time for the Faithful in Christ to get their hearts in order before the Lord.

God does not have a wife, consort or helper. There is only the Father, the Thought of the Father Who manifests as Jesus the Christ, King of kings and Lord of lords and Their Presence in the Holy Ghost.

You worship God alone. Not Angels, not the dead, not Saints, not demons and not nature.