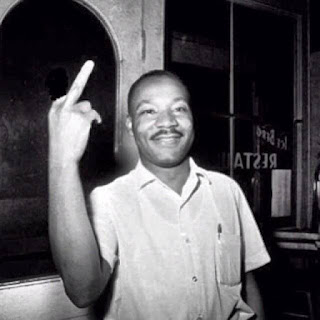 
The Lame Cherry is going to provide you some facts on the murder of Martin King. If those involved in it, had simply waited awhile, Martin King like all black men would have died of a heart attack as his heart was so deteriorated, this 39 year old Negro would have been dead of the black man's disease.

According to Taylor Branch, his autopsy revealed that despite being aged just 39, his heart was in the condition of a 60-year-old man, which Branch attributed to the stress of his 13 years in the Civil Rights Movement 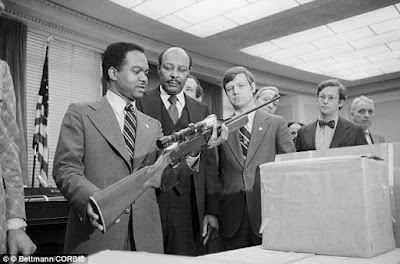 
Martin King did not die on the balcony in Memphis. In fact, he was taken to a hospital and lived for a time, receiving assistance.
The shot which killed Martin King was said to be fired by a Remington Gamemaster model 760 in 30.06. The bullet entered his cheek, struck vertebrae, traveled downward, and struck arteries. The cheek wound was bleeding profusely, but he had a pulse. 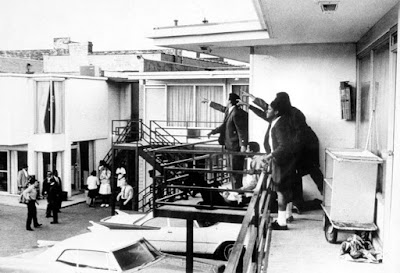 The interesting part of this, is the revelation in all of this that the shot came from above as the witnesses point to. For a marksman, as the Lame Cherry is, it is confirmed in forensics that the shooter was probably not firing at King's head, but was firing at his chest, and the elevation of the shot, rose the shot from the chest to the cheek.

The eyewitnesses are not point to Ray's location, but to a different location.


CNN - THE JAMES EARL RAY RIFLE DID NOT FIRE THE BULLET THAT KILLEDMARTIN LUTHER KING!

July 11, 1997
Web posted at: 11:47 a.m. EDT (1547 GMT)
MEMPHIS, Tennessee (CNN) -- Markings on some of the test bullets fired from the rifle believed used in the killing of Martin Luther King Jr. do not match the markings on the bullet that killed King, according to an affidavit filed by confessed killer James Earl Ray's attorneys.
The results of bullet tests, conducted in May, were read in court by Judge Joseph Brown .
Lawyers for Ray, who sought the tests in a bid to prove his innocence, are asking Brown to approve additional tests on Ray's .30-06 hunting rifle .
"A comparison was conducted of the bullet material removed from Dr. King with the 12 test bullets that could be adequately analyzed," Brown said, reading from a report on the test firings.
"This comparison revealed that the gross and unique characteristic signature left on the 12 test bullets by the James Earl Ray rifle was not present on the death bullet."


It was a most poor vantage point in being to the side and not the front.

On April 4th, 1968, one month after the above memo was sent out by Hoover, Martin Luther King was in Memphis Tennessee, trying to pick up the pieces of a peace march that on March 28th had been disrupted by a gang of agents provocateur called "The Invaders," later revealed to be connected with COINTELPRO.
When Martin Luther King announced his return to Memphis, the FBI, with direct approval of J. Edgar Hoover, circulated to friendly press contacts a memo riducling Martin Luther King for staying at the white-owned Holiday Inn instead of the Motel Lorraine, which was black-owned. King fell for the ruse and booked himself into a ground floor room at the motel. An unknown individual, claiming to be King's advance man, changed the booking to the second floor room with the balcony, claiming that King liked to look at swimming pools.


The seizure of the Black Revolution in America from the Marxist Vatican front, to neutralize a Helter Skelter, a Mau Mau militant armed united front of terror in America, which installed FBI mole Jesse Jackson as control over the movement and allowing the Nation of Islam to be sidelined with the death of Malcolm X, was effective police state policy, and interestingly was resurrected under foreigner Birther Obama with Eric Holder, still stoking the resistance in wilding, racism and Treyvon Martin.

There is another operation building up on the foundation of Diamond and Silk, in Kayne West in the rap culture establishing the Trump Party to put the GOP into a 3rd party status, where Trump leads a new fragmented democratic sodomite socialist party for a 2020 victory.


You are witnessing history being moulded again and the weaponizing of blacks is part of this continual process.