The WIA's and KIA's of the Russian Front 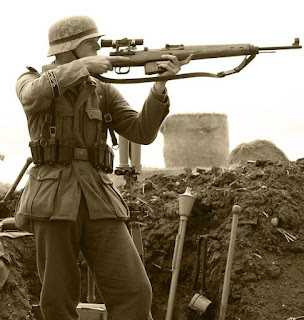 Having been in situations where shots seemed to rain death like flies on Raid, it never ceases to impress me the special ones  like Sgt. York or Joseph Allerberger when events like that happen.

It is always a routine situation of advancing on the enemy line, and then something happens where an enemy is like chaff to the wind to your gun barrel.

Allerberger was a Marksman, but when you consider in his warrior life that the enemy often got the first shot and he was taking horrific fire, it is first amazing he survived and second that he constantly killed as many communists as he did.

While he never stated this was his best mark, the day the Soviet's ambushed his patrol from the Russian trenches and Allerberger was pinned down, with only the dead bodies of two Landsers for protection as their bodies shook from the bullets riddling them, and in that he maintained a constant and steady fire while keeping his head.

His first objective was to kill the machinegunners and he accomplished that with two shots. This was not the first though as he killed between 10 and 20 communists charging the German position, as fast as he could shoot and unload the 10 shot clips. His fire was so accurate and deliberately wounding to make the communists scream in order to unnerve their forward assault, that the communists soon crumbled and  returned to the trenches as Allerberger rained death in their retreat.

After the duo of machinegunners were killed, it was a matter that the Marksman, using exploding Russian shells in his captured Nagant, blew the heads off of every Russian he fired at. The last volley was at a Russian trying to carry a comrade on his back, and Allerberger shot them, but they had a demolition pack on them and both blew up. It was a fitting end as in all the firing and screaming, all that was left was silence, as the Landsers approached the trench and witnessed nothing but brains covering the back of the trench.

There were over 50 dead communists on the battlefield and 21 more with brain shots were in the trenches. Allerberger accounted for almost 2/3rds of the dead. It was a remarkable performance to Saul killing his thousands and David killing his ten thousands.

Their work was so effective in the Russians had thought they had come up against a real force, that the communists were quiet for a few days, but soon enough appeared with a massive assaulting force. The Landsers were fortunate to survive as the communists deliberately fired on the officers.
It was Allerberger who provided the covering fire with his Model 43 semi automatic rifle with fire as the Landsers withdrew.

The Landsers last platoon leader, Sgt. Willi Hohn was injured horrifically in this firefight as he had risen to signal orders to move when a communist sniper shot him just behind both eyes, so they both popped out. He was screaming that he could not see and another Landser tackled him from being shot again. To his horror he was faced with a Holloween skull of two empty eye sockets.
He was dragged away with the Landsers screaming, but survived the war as one of the many WIA's whose lives were shattered by the communists.