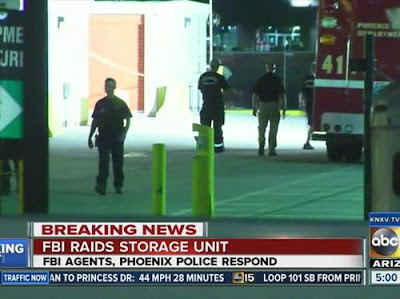 
What a revelation has appeared in the framing of Paul Manafort, because now we have discovered that the Associated Press, which is a CIA generated spy front, was the source sent to the FBI, declaring that there was a storage locker holding Manafort's personal papers.

This information is coming directly from the FBI and is in reality an illegal search and seizure.

A personal assistant to Paul Manafort granted the FBI access to a storage locker, allowing the government to secure evidence that President Donald Trump's former campaign manager is trying to suppress, according to testimony on Friday in a federal court hearing in Virginia.

FBI special agent Jeff Pfeiffer made the disclosure at a hearing to consider whether evidence from the locker and a separate search of Manafort's home, both in the Washington, D.C., suburb of Alexandria, could be used in a Manafort trial set for July.

The heart of this is the reality that Paul Manafort's personal assistance let the FBI into the storage locker, under the ruse that the assistant had "signed the papers" for the storage container. It is a reality that just because someone signs papers and owns the house you are renting, does not give them permission to open the door and let the FBI in to your home.


There is absolutely no validity of protection for a search warrant to open Mr. Manafort's personal possessions, for the simple reasons of:

The FBI only knew of the storage container because John Brennan's CIA had been spying on Manafort illegally ON AMERICAN SOIL.

The FBI entered the storage locker illegally, because it was Paul Manafort's paying for that locker, no matter whose name was on the papers as the assistant was his employee.

Therefore everything in that locker noted, was illegally searched, and therefore a search warrant was obtained illegally, meaning none of this evidence is admissible in these Mueller kangaroo courts.


Pfeiffer said that Manafort's personal assistant, Alex Trusko, had signed papers leasing the storage unit so had the authority to let the FBI view inside the locker on May 26, 2017 without a search warrant.
Pfeiffer said the FBI did not look at the contents of boxes in the locker until getting a search warrant on May 27, 2017.
Manafort's lawyers have argued that Trusko was not authorized to open the locker for the FBI because Manafort effectively controlled the unit.

What the FBI did was illegal and criminal. It was no different than having zero evidence on anyone, and then forcing their way into their home or computers, and once seeing something is there, then going to a Judge to obtain a warrant. That is not how the US Laws work. You do not get to violate a Citizen's Rights and then after that create a frame up of that person.


What Robert Mueller and James Comey have done to the FBI is a travesty. What this Eric Holder, Loretta Lynch and Rod Rosenstein have done to the DOJ is pure injustice. Everything they engage in is the violation of the golden thread in people are innocent until proven guilty. With this group, they target anyone, and then use any illegal means to terrorize and imprison that person.

This reminds me of that highway patrol robber who cited me for no safety belt. This crook had no way of knowing I was not wearing a belt. He was sitting there pulling over ever out of state tag to extort money out of them. I was driving the speed limit. There was no reason to pull me over and yet that is what America has become, where the police state breaks the law constantly and these crooks are never held accountable.

The FBI not getting a warrant before illegally entering that storage unit and then going to get that warrant is absolute proof they knew they were not supposed to be engaged in this illegal activity.

Paul Manafort needs to be released, Robert Mueller and the FBI forced to apologize to him and his wife, and all those involved having their wages and retirement garnished until Mr. Manafort's legal fees and lost revenues are paid off.

It is time to haul in these AP spies and find the marching orders from John Brennan in this frame up.