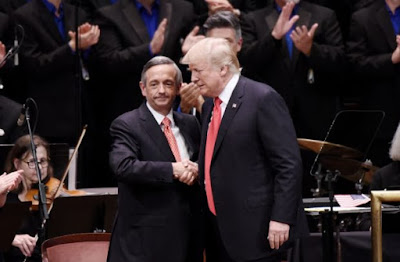 As an Evangelical Protestant Christian who first alerted the public that God was raising up a Jehu to be elected President, and who by God's Grace wrote the time line to elect Donald Trump to the White House, I know for certain that I have a bit more stature than every Christian in this country, concerning the attributes of President Donald John Trump.

That is why when I read a Baptist preacher condemning other Christian Evangelicals for being #NeverTrumpers as they are judged "morons" by stone thrower,  Robert Jeffress, here am I, the one person in this world who is qualified to address all sides in this.


Jeffers calls Christians not like him, spineless and morons, because they have a problem with Donald Trump's morals as his ends justifies the means. I was the first to say that we were not electing Jesus the Chirst to the Oval Office in Donald Trump. I also was the first to point out in the first months of President Donald Trump, that from Trump Trans eliminating all Christians from serving in the White House, to the scam of Mike Pence with McConnell and Ryan in negating the 2016 vote worse than Robert Mueller by ending MAGA.
This cost me a great deal of support and even more in donations.

The fact is for supporting Donald Trump, doing the spineless and moron work in supporting Donald Trump in 2016, that unlike Robert Jeffers in his fancy church, nice mansion, new cars, expensive suit and no doubt where his next expensive paycheck will come from, I had Homeland Security interviewing me as my witness here did not please what has come to be known as the Deep State in the FBI wanted to know who in the Obama regime was cutting them out of the loop, as we have now learned was common practice in the Obama regime.

It has not been expensive at all for Pastor Jeffers in supporting Donald Trump. I had my mother die in my arms from lack of donations here, the day after Thanksgiving. I wonder what Robert Jeffers was doing at 1:37 PM on Black Friday of 2018 AD in the year of the Lord, as I was beginning the process of the next hours dealing with the Coroner, the Sheriff, Undertaker and notifying people I could not find as everyone was out enjoying themselves.


“Let me say this as charitably as I can,” the First Baptist Dallas pastor said during a Wednesday appearance on “The Todd Starnes Radio Show”. “These ‘Never Trump’ evangelicals are morons. They are absolutely spineless morons and they cannot admit that they were wrong.”

Jeffers calls the support of Trump a black and white, life and death issue, and Trump's morals do not matter in this. In utilizing Robert Jeffers own judgments against Christians, I am reminded of the fact that 250,000 babies were butchered in the United States each year Donald Trump has been President.
Abraham Lincoln enacted martial law to preserve the union. Barack Obama broke the law to enforce sodomy on Americans, but Donald Trump chose to allow over a half a million children be murdered in America, as his promise is considered good enough for Robert Jeffers.

“This is an issue of life and death,” he said. “This is so black and white, so much about good versus evil. I don’t get it. It really goes to the core of who we are as a country and what kind of a country we have in the future and if we can’t get this issue of life right – I just don’t know where we’re going to go down the road.”

The thing is I believe God in actions speak louder than words. By their deeds, their fruit, will you know who people are.
On the Supreme Court, Donald Trump promised Evangelicals they could trust his nominees. Mr. Trump's first appointment in Neil Gorsuch, is a sodomite. His first vote was to protect criminal invaders of the United States.
Brett Kavanaugh in his first vote cast was for protecting not children, but Planned Parenthood.

In all of this, there was nothing but complete silence from Donald Trump.

All of this onslaught against Christians, began decisively by Donald Trump in the destruction of Christian candidate, Judge Roy Moore of Alabama in the smearing of him. This continued on in other Christian candidates were deposed from South Dakota to Arizona, by Trump picked opponents.

So in the examination of the facts, it is evident that Robert Jeffers is ignorant of the realities of President Donald Trump on the issues. Jeffers has taken up the role of Caiaphas in the Sanhedrin, embracing the state of both King Herod and Pontius Pilate, as it is expedient for his political whoring.

I have seen this before in the allure is too much for these "preachers". Bill Clinton after rape and adultery had his pastors of whoredom. Obama had his cult. The Whore of Babylon in the Revelation of Jesus the Christ is the Vatican in bed with the regimes of this world to benefit that Christ usurping cult.

President Trump has had enough hands laid on him by Christian clergy and Christians are told as they have been promised since George HW Bush that they were to wait at the back of the line. Bush told us to shut up and go away. Bush jr told us to trust him and nothing changed. Christians were told to trust the GOP if they were given the House, then it was the Senate, then they needed the Presidency, now they need the Supreme Court, and they had it all and nothing changed. What has remained the same is the Robert Jeffers playing Judas Goat in making excuses for broken promises.

It is always the Christian who is supposed to turn the other cheek and told to wait for another day, when everyone else gets their sodomy, aborticide and rationed death enforced on Christian America.

A true Christian leader, would be like St. Paul, calling out the hypocrisy of the Apostle Peter in acting one way in Jerusalem and another in the hinterlands, and not being a Saul of Tarsus holding the robes of those who are casting the stones at St. Stephen, as Robert Jeffers just engaged in.

What Pastor Jeffers has to answer for is in the books of Christ's Judgment, but he certainly has gotten his whore's reward in posing with a President whose entire actions have only cemented in Obama sodomy, rationed death and the continued slaughter of the innocents.

In Robert Jeffers, the tongue of spineless and moron meets, the heart of whoredom and abomination.

Try being more charitable Pastor Jeffers to Christians with morals, instead of enabling the sins of politicians.


Once again another Lame Cherry exclusive in I'm the only one qualified to address these issues.