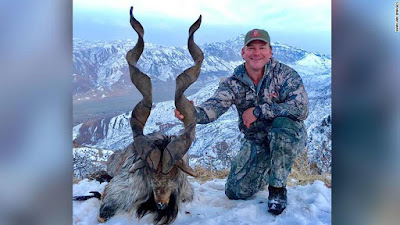 
Once again we have another Donald Trump "lion event" where we will probably have Melania banning all goat coats from the White House again, as an American hunter, Brian Harman, has been doxed as the hunter who assisted the Pakistani Game Conservation funding in paying a 100,000 plus license and tips to Pakistani guides to harvest a Markhor, which is one of the pretty Ibex type creations God placed upon the mountains of the earth.

For a reality in this again for the whining wimpies, animals do not live forever. Yes it is an amazing thing that animals are not put on shelves in the Serengeti, Yellowstone or in the Khyber. They are born, get eaten, get diseases, grow old and die.


Yes those wonderful eagles slaughtering baby goats is natural, and those wonderful snow pumas breaking the wind pipes of does is natural, but let a human do an unnatural act in actually benefiting a species which nature is making extinct, and it is the hunter who is the problem.......not the PETA frauds who put puppy and kitty pictures on television to get millions in donations a year to invest in the stock market.

Markhor if they make it through the predators can live 12 years. That means  they die. Now the reality is the Markhor population has been expanding, and Pakistan is able to offer a limited number of licenses, on mature males, who will be weakening themselves in the rut, while trying to shove themselves off cliff edges to get to breed females, that what this hunter did was of great benefit to this breeding herd.
According to Wiki, 31% of the herd are adult males or maturing males. In a limited habitat as the mountains, taking this adult male, will provide feed for 2 does or 4 yearlings, which translates to those does producing 4 strong kids this coming year, instead of weakened young which will die.

I return to the reality that is Markhor was going to die. Pakistan astutely in conservation game management selectively culled animals which are stressing that limited habitat and providing revenues for the management of this game herd. That translates into jobs for those officials and it translates jobs for the porters, guides etc... who were part of this hunt. Yes it is a living, and you can ask yourself would you rather have Pakistani's guiding Americans in conservation hunts or aiding bin Laden in murdering Americans?

In examining the animal which was harvested, this animal was on the downward side of prime. He was not in pursuit of females so was past his prime and would be bear or snow puma shit within the next year. It is far better that this trophy will be on display in America, the revenue for Pakistani game management, instead of another goddamn big predator shitting out a species in limited numbers.

That is the reality of this which all of you must face. This Markhor was going to die. Is it better to have it stressing does and kids in eating their food so a flock dies out? Is it better to have it weakened and eaten by a snow puma? Is it better freezing to death in a blizzard? Is it better that this life brought jobs to people so they are not terrorists murdering Americans by an American paying to make the Markhor flock stronger and viable so it does not become extinct?

World Wildlife Fund and PETA do not run ads for Markhor, because they are ugly and no one knows what these goats are. They instead feature snow leopards which slaughter these Markhor and are the problem for the herd in conning you to donate money for that.

Now who is the culprit in this? The group conning Americans and Europeans out of money for predators to make the Markhor extinct in their not caring about this herd animal or the Pakistani Government and an American hunter who actually benefited this herd of animals?

An answer is required as just like the Markhor, you are not immortal either and you are going to die.