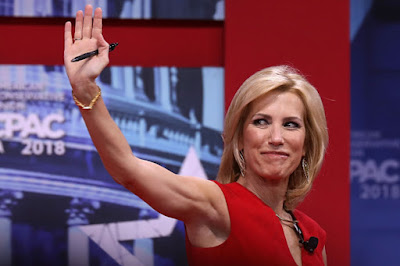 I am your blonde voice as no one likes to listen to Cootie Coulter any more.
I complain, have my millions and you just fade away as your remote gets turned off

I was reading an article on the Independent Sentinel over Donald Trump's promise to sign an enormous pork spending bill with amnesty for criminal invaders to America, and how Laura Ingraham is raging that Trump should not sign this bill.........

Mitch McConnell says that Trump will sign the bill and declare a border emergency. Did I not tell you that the way Ocasio Cortez and Pelosi were Trump Clappering at the State of the Union that a betrayal of Trump voters had been worked out? Yes I did, so where are the rich people feeling it is their duty to click that DONATE button and support the only media which informed you how this was going to play out weeks ago.
Yes donating generously as this is it for the media as no one else is off the Mockingbird reservation.

The reason for the IS that Trump should sign this, is if the President does not sign this Porkamnesty bill that it will hurt the US economy. I have news for the IS that Donald Trump is going to be blamed for what is coming as the US economy has entered into a massive recession and with Trumpflation an Obama Super Depression is coming.

My proof of that is Shopko. Most of you have not heard of that chain, but it is a mini Walmart. Shopko went into communities which Walmart would not touch as Walmart only does beanerland. I have been watching Shopko in the massive sales this past Christmas and as of this week it is into the second round of rural American store closings and has filed Chapter 11.
This is the Walmart of small town America just went tits up in the Trump economy in all of Trump's Goldman Sachs tax schemes buried this corporation as it is burying other corporations as this is still moving to Obama centralized control of the US economy in Amazon running the tap end.
Amazon is paying zero taxes again this year with over 11 billion in commerce. Once the monopoly is complete, Amazon will gouge everyone.

Shopko took over from a chain called Alco, which probably was Pamida which was Gibsons back in the day before Walmart or Kmart. The point is the US economy is tanking massively and Donald Trump in policy did nothing to stop it, but in fact exasperated it, by screwing poor people over in taxes again.

I would hope that Donald Trump would not sign this fraud, and just declare a border emergency and start arresting the deep state wholesale, but that is pretty hard when the deep state is now the group backing your agenda.

The United States is finished as a nation. That is nothing to panic about as it has been over for decades. It is the reason to trust only in Christ as these sons of men are not going to do what they promised.


The bill provides $1.375 billion in funding for Trump’s proposed barrier and funding for approximately 40,000 detention beds for the Immigration and Customs Enforcement (ICE) agency. Trump was originally seeking $5.7 billion in funding for the proposed wall and has said he is “not happy” with the joint solution. (RELATED: Raid Leads To More Than 100 ICE Arrests In New York)
Trump’s action is not unexpected. In a speech on re-opening the U.S. government in late January, he said he would allow for a 3-week negotiation period and that if an unsatisfactory deal was reached, he would declare a national emergency. The declaration will allow him to tap funding within the Department of Defense under his authority as commander in chief.
McConnell’s speech indicates Trump will make up the shortfall of funding that was delivered by Congress by declaring a national emergency. Acting White House Chief of Staff Mick Mulvaney indicated Sunday on Fox News that other avenues of funding are available outside of Congress.
“We’ll take as much money as you can give us and then we’ll go off and find the money someplace else, legally, in order to secure that southern barrier, but this is going to get built with or without Congress,” Mulvaney said.


How much do you want to bet that there are a dozen lawsuits ready to be filed in California to stop Donald Trump from acquiring funds? Watch that point in what is done and not done, as where the money flows is where the money goes.
Remember Webster Griffin Tarpley in what he said would become America in two parties of communism and socialism and a shit hole GOP.

Does that need repeating or can you remember that like you are going to remember to donate.