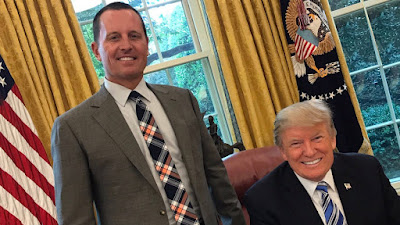 Thou shalt not lie with mankind, as with womankind: it is abomination.
The Lord God - Leviticus 18:22


I honestly believe that now with the Trump Administration supplanting Sodom and Gomorrah in God's Abominations that the United States is finished.

Apparently now with Americans not having enough money to heat their homes in HAARP freezing Americans to death, the Trump Trans has found money in the phantom budget deal for the Trump Wall to fly in queers to Berlin, in a global coordination of fag nations against nations which still have laws which state that being queer is a threat to society as it is a perversion, disrupts families, steals from society and spread disease.

But none of that matters as the new Trump Global Policy is attacking nations over this issue.

The Trump administration is launching a worldwide initiative to end the criminalization of homosexuality, NBC News reported Tuesday.


What are the details?

Openly gay U.S. Ambassador to Germany Richard Grenell is spearheading the effort, "flying in LGBT activists from across Europe" to discuss the strategy in Berlin Tuesday evening, unnamed officials told NBC News.
"It is concerning that, in the 21st century, some 70 countries continue to have laws that criminalize LGBTI status or conduct," one source told the outlet.

It is not been defined if the neo Trump United Nations Ambassador in waiting, is going to declare war, use nuclear weapons or just what enforcement Donald Trump is going to unleash on these 70 countries, as this seems to be a sort of telling God that He is wrong and abomination is the way.
I did not support nor vote for Donald Trump for the scent of feces penis to be a part of United States policy, spending my tax money which I can not afford, setting American policy based in queers nor telling God that He does not know what the hell He is doing in the Bible.

As a Christian, I was not going to address the issue of 2020 in voting until the primaries, but as a Christian, I am not going to be linked to any of this. America is a Christian nation founded by Christians who were persecuted for being Protestants, who adhered to the Bible and it was abhorrent in all sexual perversion.

It is dust off my shoes in I do not need Angels dragging me out of this and I will not be turning into a pillar of salt looking back at what I just fled.  They are not going to do this in my name. This is all on this regime.