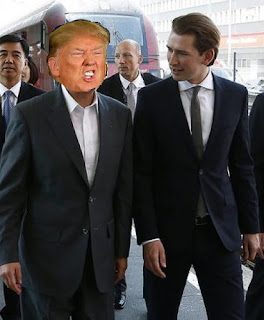 I'm looking forward to meeting Donald Trump at the White House on February 20 @POTUS for a job interview. The #USA is a superpower and our second most important trading partner. @usembvienna
44 replies 61 retweets 305 likes
Show this thread
Sebastian Kurz
Verified account @sebastiankurz
Feb 7

Most of you have probably heard of Huawei, and Canadians being thrown into prison in China over American sanctions on the Chicom company, but it is all murky and none of it makes sense, because no one is telling you what is behind all of this, that is until the orphan girl, La'me Cherry is about to enlighten all of you.

The light on this begins as Donald Trump invited the most powerful leader in the world, Sebastian Kurz, the Chancellor of Austria to the White House at the end of February for a bilateral summit between Austria and the United States in cabinets and ministries. The problem is that the United States has moved to cut the Obama era American protected poppy fields in Afghanistan to keep European banking solvent, while Secretary of State Mike Pompeo was dispatched to Europe to undermine Austria's leadership, as using the Kruz Trump meeting to provide cover for the banking crimes of the Kushners in German banking.

This becomes a worse disaster than what anyone has yet realized, as Mike Pompeo has arrived in Europe to bitch slap the Slavic peoples and the language is about to alienate 150 million Europeans, as Pompeo is  calling the leaders of Slavic Peoples, beginning with the Hungarians, that they are led by undemocratic leader.

This is the lowest insult that the Americans could ever level at the legitimate leaders of Europe, but what is at the heart of this is everything Sebastian Kurz has been engaged in, with Indochinese trade based in Europe's labor market of the Slavic States. It all centers on the revelation that the United States targeted the Chinese Huawei, which it turns out has been using pirated American technology for lucrative deals for Slavic States in Europe who are benefiting in the arrangement. 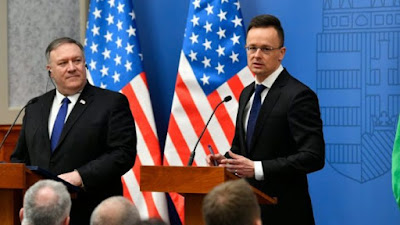 The Americans called me an inbred mongrel Slavic bastard

Pompeo begins a divisive march through Europe
Sign up for the Today's WorldView newsletter. On Monday, Secretary of State Mike Pompeo arrived in Hungary, the first destinati…

Pompeo in Hungary for Orbán meeting as US reengages in region ...

Feb 11, 2019 · Mike Pompeo arrives in Hungary, where he will discuss a defence cooperation agreement. Photograph: Marton Kovacs Handout/EPA The US secretary of state, Mike Pompeo, ...

Feb 11, 2019 · US Secretary of State Mike Pompeo warned European countries on Monday that using technology from Huawei could hurt their relationship with the United States.


Secretary of State Mike Pompeo was in Hungary on Monday to strengthen ties with the NATO member and U.S. ally. But his visit highlights a clear difficulty for the U.S.: pushing back on undemocratic allies while countering overtures from Russia and China. That’s a fine line to walk. Too much pressure to reform and undemocratic leaders will look elsewhere for support, too little and a country may lose its democracy for good.
These tensions were on display during Pompeo’s press conference with Hungarian Foreign Minister Peter Szijjarto. Talking up the danger of growing ties between Hungarian Prime Minister Viktor Orban and Russian President Vladimir Putin, Pompeo warned, “We must not let Putin drive wedges between friends in NATO.” He later cautioned, “Russia’s not the only power that wants to erode freedom in this region” adding that he had already discussed with Szijjarto “the dangers of allowing China to gain a bridgehead in Hungary.”

As all of this American intrigue is taking place before the Kurz Trump Summit, it is noted here that Sebastian Kurz's twitter links have disappeared from Duck Duck Go, but are still available on Google. It is also noted on Twitter that the first salvo that Chancellor Kurz has responded with to Mike Pompeo's insult, is to retweet the Sebastian Kurz political blitzkrieg in Germany in Manfred Weber whose focus is Fortex, the European private para military enforcing European sovereignty at home and abroad. Without intending to insult, but placing into context. Fortex is the modern SS of the police state. This is the political enforcing arm of the Habsburg governance of Europe, this is the European Super State.

It will be Donald Trump's Academi mercenaries who will contend against Sebastian Kurz's Fortex in the prelude to global dominance before war engulfs the world.


Our common attitude is clear: we want to strengthen and expand #Frontex, intensify the fight against smugglers, stop illegal migration, if possible already at the EU's external borders, and improve cooperation with the countries of origin. #CDUWerkstatt

It has literally been stated that the United States is equal to Russia, China and foreign invaders as a threat to Europe.
The Germans have now joined Sebastian Kurz in expulsion of foreigners. Do not lose sight in this, that Americans are foreigners in Europe. Adolf Hitler's first objective in Europe was to expel the British and to subdue the French. Sebastian Kurz has already accomplished this.
The aboriginal foreigners are in process being dealt with. What is left now is the undo influence of the Americans who have become the Ugly Americans of lore.

Already at the external borders of the Schengen area, in hotspots and transit centers, the rejection of persons who are not entitled to immigration and the repatriation of persons without asylum reason and without refugee status must take place.

We now have before us an expanding diplomatic enforcement of the United Sates upon European nations, the Slavic Peoples, which is equal to the war efforts of Franklin Roosevelt against the Japanese and Europeans. For a factual account in this, the Jewish state has been illegally stealing and selling US technology for decades, but nothing is focused on concerning this, but these poor Slavic States have now been called illegitimate and the legitimate economic foundation of Sebastian Kurz's European Super State.

It will be plainly stated, the words of Mike Pompeo are not designed to diplomatically solve an issue, but this is a deliberate alienation of Slavs and to fracture European Germany to a Balkan state. This is designed to create a war in Europe. What will take place is either a weakened Germanic Fatherland and Motherland which Russia will be drawn out to engage in war in these separated European nations, or it will drive the Slavs into a union with Germany in the 1940's Reich, which Russia will be threatened by this powerful entity.

It should not be the policy of the United States to repeat the mistakes of 1917 and 1945 in world wars as this is a nuclear and high technological era. Literally, war will now reach out and obliterate parts of America in this type of brinksmanship.

This keeps degrading to worst and worst actions by the United States and the conclusions are what the Europeans know as they are not ignorant, and it trends the fear the British were phobic of in a coming Berlin Moscow alliance, which will include Peking.
The world is no longer a British Empire, French Colonials and American projection of power with Japanese Imperialism. America is rot from within and the others are shadow boxers. They will be absolutely no match for this European Super State, which it is in Peking and Moscow's interest to replace the United States. 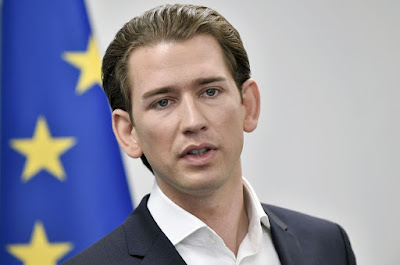 Americans are not a mystery. They are children revealing their every move.