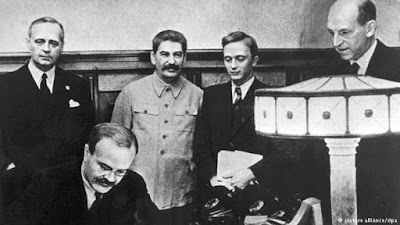 
In one of the most unnoted events in world history involving Adolf Hitler, British historian John Keegan in a segment mentions something which is worth further study as the world in 1941 AD in the year of our Lord was not a world at war, but instead was an odd assembly of intrigue and non war.


In the east, the Japanese had suffered an earlier defeat to the Soviets, but Russia and Japan were not at war with each other. Japan was in conflict with China with American backing over Japan taking Manchuria for her agricultural and industrial needs.

In the west, there was a non war between Germany and Britain with France in Vichy state for Germany and the Americans supporting England.

Into this Adolf Hitler, was unable to defeat Britain, nor invade her, nor force her to capitulate, as Hitler did indeed want peace with the Empire, as the Empire was falling apart and not a threat to Germany. Hitler had achieved his goal of driving the English from the Continent and their position of intrigue.

For the record in this, it was indeed Churchill who caused World War II, with the lusting for profit and power by Franklin Roosevelt, because Churchill would not treat with the German peoples for peace. This is where Adolf Hitler's genius again appeared, because he seized upon a fact that if he could not get England to fight him in a battle he could win, he would open theaters or war to make England fight him on terms Germany would win.

That is what Adolf Hitler was engaged in, in 1941 AD in the year of our Lord, in a strategic maneuvering of creating a broad coalition of resistance. The first expansion was the Tripartite Pact between Italy, Germany and Japan, that if they were attacked, the other members would attack the attacker.
Next Adolf Hitler began expanding into Hungary, Romania and Slovakia in the Tripartite Pact.

With this, Mussolini in complete agreement opened the African front against the British, to make the British come out and fight.
In the meantime, Hitler was attempting to treat with Franco of Spain for access  to Gibraltar with promises of African holdings for Spain.

This is where the problems began for Adolf Hitler as Benito Mussolini was in competition with Hitler's grand successes and was attempting his own southern Roman Empire, which from occupied Albania, Mussolini attacked Greece which failed.
Mussolini also had invaded the Balkans which is the last thing Hitler desired, as he sought to make the Balkans a diplomatic free zone for his coming maneuvers. This was compounded by Molotov, the Russian foreign minister appearing in Germany for talks with Adolf Hitler.

Instead of talks, Molotov in being offered the opportunity of despoiling the British Empire in the east and south, while Japan completed her sphere in Asia and Germany secured Africa, responded with reminding the Germans of the Molotov Ribbentrop Pact where Russia would have free access to the Black Sea, and then came a series of most interesting demands.
Russia wanted to annex Finland. Russia wanted to secure the borders of Bulgaria which would infringe upon German influence there and expand the communists.
Molotov then revealed Russia had sights on Sweden, control of the Baltic Sea and into the North Sea, which were German waters.
It then expanded to military bases in Denmark, taking Constantinople, and annexing Romania and Bulgaria.

Before this meeting, Adolf Hitler had set his sights on an eastern campaign to crush the communist menace, and after Molotov deliberately vexed the Germans, Adolf Hitler was settled from that moment on to destroy the Soviet Union.

One wonders about the Soviet enigma, as to the day Adolf Hitler opened the eastern front and thereafter, Joe Stalin had sought at every opportunity to appease Germany and not open a war with Berlin. That is how odd this all is, as Molotov did his most to be absolutely the catalyst to light the fuse that Winston Churchill had provided.

Molotov in hearing British bombs fall overhead as he sat in the bunker with the Germans, smelled an opening to exploit that weakness to gain German concessions, but instead brought about a war which Stalin slaughtered millions of his own people due to absolute ineptness.

This is what began World War II. It was not Germans or Japanese. It was the French bullying Germans. The British sticking their nose into Poland. The Americans under FDR humiliating the Japanese as Molotov did the Germans, and Molotov attempting to bring the Germans to heal as the British bombed Berlin.

It was not a world war until Washington, London and Moscow, forced the hands of Berlin and Tokyo, as Berlin and Tokyo were only interested in their place on the world stage which the European powers and America had gleaned for themselves in war.