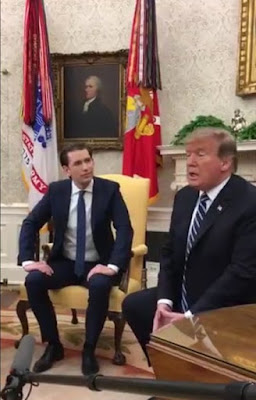 I had hoped that the counsel of this blog would have saved Donald Trump and the United States from undo hardships and retributions, but after watching the meeting between Chancellor Sebastian Kurz of Austria, representative of the European Super State and President Donald Trump of the United States, the body language stated it all as primate Trump in his "jungle gorilla pose" compared to the formal etiquette of Sebastian Kurz reveals  the following.


Trump does not take Sebastian Kruz serious as a leader as Trump contends he is the prime ape and will not share the bananas.

Trump reached across and patted Kurz on the arm, in holding him back was the message, meaning Donald Trump is insecure over Sebastian Kurz's rapid advances.

Sebastian Kurz is not intimidated by Donald Trump and with his hands in the same genital pose as Trump, but protests the incorrect primate assumption of  Donald Trump that gorillas could fly to the moon too like humans if they really wanted to.


In 2016, this orphan girl, once the popular girl stated that she knew how to trigger Donald Trump. I have never revealed how to do it, but in posting what I did concerning the Kurz and Trump Summit, I inadvertently accomplished it psychologically.
It appears in the White House press conference between Kurz and Trump, and it involves Donald Trump holding back Sebastian Kurz with pats  to the arm and insults to the Chancellor in Trump repeatedly calling the Chancellor a young guy. For those who paid attention, this blog needled Donald Trump as the old guy, the geezer in this meeting whose time has past and Kurz is the future of Europe and the world. I know Donald Trump read a transcript of that posting by the way the President reacted. I was honestly attempting to rescue Donald Trump and in my frustrations with his betrayals of Christians, needled him on being past his time. Trump instead of heeding the advice, instead had to go gorilla pose and attempt to dominate Sebastian Kurz. Trump went New York Values in "Whadda guy" in he kept talking over and attempting to get the last word with Sebastian Kurz.
Be warned, the Germans are a very polite people and will take a great deal of abuse in public, but none of this was lost on Sebastian Kurz and by all that is German, the German in Sebastian Kurz is going to make Donald Trump pay and the United States pay for that insult.


I believe that Trump in this exchange with the Chancellor,  inadvertently stated that the Chancellor was young and made mistakes. That translates to the United States is spying on Sebastian Kurz and the Austrian government in being privy to private admissions. When Donald Trump is triggered he makes mistakes  and as Sebastian Kurz stated later, "Trumps outbursts are nothing one can prepare for". Sebastian Kurz has inside intelligence on the inner working of Donald Trump.


In the emerging roles, Sebastian Kurz does not need to be reactionary as time is on his side. Europe has the African consumers. Europe has a secure society. Europe is at peace with Russian and China, with expanding influence and trade with the Ring of Fire in the Pacific. America is in debt, at cold war with China and Russia, has no production and no trade, with an old man as President. Sebastian Kurz will see his vision come to fruition, past American meddling in Europe and Trump insults.
In short, each day Europe grows stronger and more vibrant with Sebastian Kurz and each day the United States grows weaker with Trumpamnesty, Trumpflation and Trumprage on Twitter.

The President of the United States is still under the conclusion that the United States is supreme and that it is just little Austria, and the USA can leverage London, Berlin and Paris against Vienna. Donald Trump is incorrect as that order has passed and the German Order is rising in a new confederation based on the old lines of the Habsburgs governance of Europe.  What seems a small seed in Europe is about to grow into a Sargasso Sea of enveloping  plants overtaking the world.

Sebastian Kurz on Twitter stated after this meeting that there are vast differences in policies between Europe and the United States. He is not yielding to the Americans though and is progressing on to his objectives. The issue which the Chancellor was focused was trade, free and fair trade, which translates that Europe  has chosen to pick up the gauntlet which Donald Trump threw down, and Europe is going into a trade war with the United States and will bury the Americans as it is now a Kurz Eurasian World and not a world where American bombs dictate American mandates to Eurasians.


Chancellor Kurz is visiting US President Trump today. In short, the threat of tariffs is the most important topic in the conversation, "because any form of restriction of fair free trade leads to a threat to jobs in Austria."

The conclusion of the Kurz Summit was Donald Trump, who refers to him as a Chancellor, not as Sebastian, and the Chancellor refers to Donald Trump as President.  There is no relationship with these two superpower leaders. Sebastian Kurz has this with Vladimir Putin and the Pacific Rim leaders. In that reality the job the President of the United States needed to accomplish which this blog warned of in making Sebastian Kurz a partner,  Donald Trump has failed immensely in appeasing the Furher of the European Super State.

Donald Trump in his Balkanization of Europe is attempting to crush Germany. Sebastian Kurz is well aware of the Trump gambit as targeting Germany, targets Austria and all other European nations.  This is why the Chancellor before meeting with Donald Trump was in Japan and in Korea, leading those Asian car manufacturers in a united front to neutralize the threatened Trump tariffs of 25% on their automobiles.

Sebastian Kurz was ready for Donald Trump and the Chancellor's word were concerning Trump Speak was that it was a very controversial conversation. Donald Trump attempted to bully the greatest leader in the world and as Sebastian Kurz sat in Germanic protest his poise sent the message, "I am here old man and I am staying as leader of the world".

There is one epitaph to this Kurz Summit, which was the greatest and most necessary meeting of the United States since the Treaty of Paris, and that is Sebastian Kurz said in all of this to Donald Trump, two words, "You're Fired!"
The Trump outsiders failed as Donald Trump is stuck in the 1950's bad suit movies. Sebastian Kurz moves on to leverage the weak links of Ivanka and Jared in a private meal at their home concerning Tel Aviv rule in Washington DC, and then moves on to inform American finance and the IMF that a new financial system is about to envelope the world, and it is Vienna's gold not New York debt which will move the world.


And Donald Trump has no one to blame but himself. 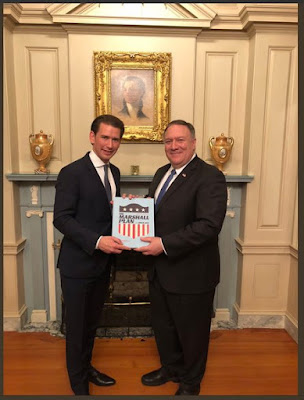