Kurz Forges Ahead in the Middle East


Chancellor Sebastian Kurz for being part of the Drei Präsidentschaft (Tri Presidency) of the European Super State is certainly conducting himself in the reality that he is the one world leader on the stage.

To rehearse the monumental week of the Chancellor in review, Sebastian Kurz jetted off to Tokyo and Seoul to cement a trade axis against the United States in threatened auto sanctions of 25% tariffs on European automobiles to neutralize the Trump Threats.
Then the Chancellor appeared at the White House where he fired Donald Trump as leader of the world.
Next, the Chancellor visited the World Bank and the IMF, cementing European finance over the United States.
Following, the Chancellor hosted the first Arab League Summit, where all the smiling faces were pleased to be with Chancellor Kurz in coming into the European sphere from the American fold.


Austria's right-wing government announced plans on Monday to hold asylum-seekers in so-called preventative "security detention" if they are found to pose a potential threat to the public.
The constitutional amendment would enable Austrian authorities to detain asylum-seekers without first securing a court order.
In order to hold someone in preventative detention, authorities would need to have concrete suspicions that the person could carry out, or planned to carry out, a specific criminal offence, Chancellor Sebastian Kurz told reporters.

Austrian Federal Chancellor Sebastian Kurz declared at the 2018 AJC Global Forum that the Austrian government viewed both the fight against anti-Semitism and the security of the state of Israel as part of his country’s Staatsräson, or national interest.
Kurz also noted his government’s support for Israel as a Jewish state, announced plans for Holocaust education, and urged his audience to draw hope from post-World War Europe for a vision of regional peace.

Austria in the above has set the stage to govern the Mideast from the Vatican Order in establishing security rights over the Mideast for European Soldiers to keep the peace.


I am pleased to participate in the first summit of the # Arab League #EULASsummit. The stability in our southern neighborhood is essential to us. We therefore need to deepen our cooperation in #Migration, #Terrorism & #economy.

Chancellor Sebastian Kurz is not only parting the waters, but walking upon them, as Donald Trump Twitter splashes in rages to distract his cast aside voting base so they do not realize they have not received anything Donald Trump promised from no one earning under 50,000 would have to pay income tax to the end of Obamacare, to a real border wall.
Sebastian Kurz has kept all of his promises and moved beyond them to establish an ever growing world union of the content to be represented by his leadership.

Below you will find the Chancellor annexing Iraq from the United States. 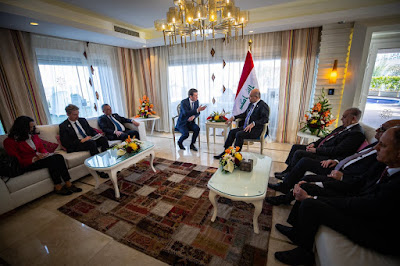 
Good meeting with Iraqi President @BarhamSalih at the #EULAS summit in Sharm El-Sheikh. It is important to continue to work closely together in the fight against terrorism after the victory over the #IS & to help rebuild the #IS liberated areas. 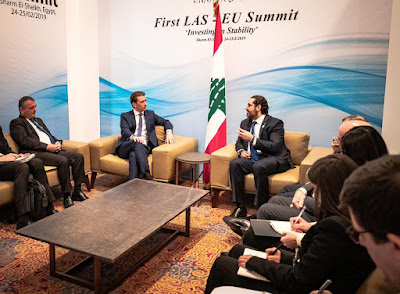 
Interesting exchange with the Lebanese PM #Hariri on the political situation in the region, especially in #Syria. The #Libanon is home to 1.5 million refugees, the world's most refugees per capita. It is therefore important to continue to support #Libanon in the best possible way.

Here is the Chancellor with the Kuwaiti leadership which is the hub of Arab oil money laundered into Europe. In all of this, Sebastian Kurz has gained control over the contraband markets and the oil markets entering Europe in an ever growing super economy, based in Iranian gold pouring into Europe, with Venezuelan refinement in Turkey and marketing through the UAE through Iran. 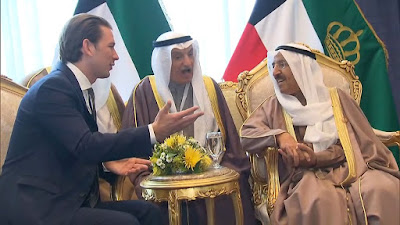 
Good conversation with His Highness Sheikh Sabah from #Kuweit. We have excellent relations, important Kuwaiti investments in #Austria and potential for more economic exchange.

In all of this do not lose sight of the SOUTHERN NEIGHBORHOOD, which is from North Africa to Iraq. The billions in gold, poppy and oil, in the Arab Muslims flowing into European investment instead of the United States has now been secured.
What is vital to not overlook in this is twice the Chancellor has focused not on just invasion and economics, but has focused on terrorism.
Terrorism is on the Chancellor's mind, and in logic as this blog has noted for years, the fabled "mark of the beast" is a pass code for only Europeans to buy or sell for security reasons. To establish such as security would require a 9 11 type event in Europe or a war of such upheaval on the European border (Europe has not any border with Arabs or Persians, only Turkey) in order to establish such an economic security situation. 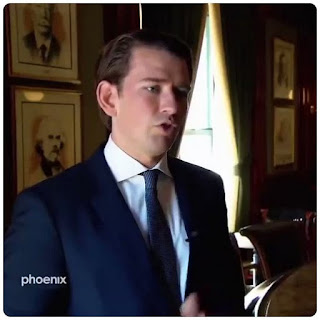 The Phoenix is rising from two Franco Anglo Wars of genocide utilizing Russian hordes and American manufacture to defeat the Sachs or Sword Bearers in the Germans.  The Habsburgs by tradition are a peaceful leadership in Europe and Sebastian Kurz has peacefully extended the Habsburg's Empire beyond what that family ever ruled from. In direct challenge Chancellor Sebastian Kurz has leveraged the United States from position in Africa, the Mideast and the Ring of Fire to create an European Super Power.

While he can attain a permanent leadership with Parliament elections in May, logic points to it will require a security event for the ESS (European Super State) to transform their Frontex (Security State) and military into the type of security group to project the power of Vienna. As the Chancellor has not missed anything, including not making the mistakes of Adolf Hitler in alliances with the Italian Mussolini which degraded the German advance, there will be a reason backing the German Defense Minister's announcement that Europe is building a Continental military force to defend herself, free herself from Americans and to establish protection for European footprints from North Africa to Afghanistan.


Europe is forming an army


This is what Germanic leadership looks like. Everyone getting along, everyone smiling, everyone getting their share of respect and the profits. The Franco Anglo American alliance is positively being rejected for an establishment of this order and Sebastian Kurz is the leader of this world.