Prayers for the Viking


The above is from the Viking which he shared  today. I had thought America had put Obamacare behind us, but in Minnesota a ankle like this gets you a September appointment, unless you have someone asking for a Viking to be bumped up.

He tells me this will be 6 weeks in the operation and I am not offering advice, but this is what a joint looks like when it is angry.  This is what happens when you work for a living in a shipping department to keep Canadians in things Canadians must have.

We will be praying for the Viking, for the surgeons and Holy Angels to guide them all, for a speedy recovery. If any of you deadbeats who have been stealing from God and me would care to spread some penance, you could risk being struck by lightning and say a nice prayer for the Viking. Who knows it might even inspire you to be a real Christian and tithe like your eternal life depends on it, as this is one of the guys who has been carrying your pasty white asses around as you live the life of luxury.

No wonder the Viking's ankle hurts, in he is caring for his Mum like I did for mine, and working as Viking's do, and he has you deadbeats on his back. You should be ashamed, but nothing shames any of you.

The Viking tells me in billionaire Minnesota, the sodomite regime there is raising gas taxes 20 cents a gallon, as the billions Minnesota spends on things is not spending enough on whatever they need that 20 cents for. See I like this idea really, but not for the Viking as I remember Minnesota jacked up cig prices and people went to North Dakota for smokes. This 20 center goes through and the border states will be having all the Minnesota people driving over to fill up.
Those bordersotans are remarkable in surviving in the Metro sucks the life out of everything in outstate, so the towns all close and the peasants shop across state lines which further destroys outstate Minnesota.

I always like to end these things with something nice, and what could be nicer for the Viking to be thinking of a nice sponge bath from a hunky male nurse. When I was in hospital I had a lovely female nurse I  think who was named Burtha, who was about 3 foot tall on her hind legs and 4 feet wide on the same legs. Gave great back rubs, hands like a meat cutter who had been tossing slabs of beef around since the cradle.

Yes nurse Ted comes in and puts the lotion on, curls up in bed spooning with you as Green Acres is playing on the tube. Yeah when I was in hospital all they had on was the GOP convention and Green Acres. ......and of course Burtha.

Nothing like looking forward to a man with his shirt open, thinking about the little candy striper, while he is running that pink lotion all over your body.

I actually had bathroom privileges. The staff was really impressed with telling me how special I was. 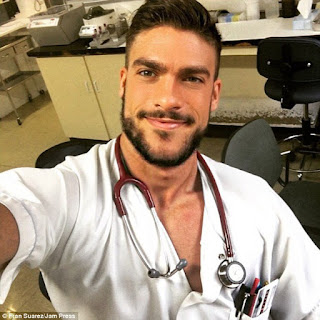