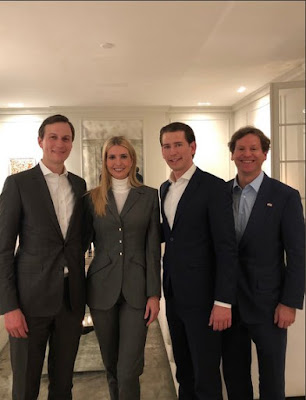 Thank you to @IvankaTrump & Jared Kushner for your hospitality yesterday! It was great to discuss current geopolitical issues, especially the #MiddleEast and #trade relations between the #EU & the #US. @usembvienna

After Chancellor Sebastian Kurz Summit with President Donald Trump, in which the Chancellor fired Donald Trump as leader of the world, a most Tale of Two Worlds emerged in it was the Best of Kurz and the worst of Trump appeared in print.

For Donald Trump, he was twitter raging again about blacks, coup plotters and his border wall, violating all etiquette in not thanking Chancellor Kurz for coming to America. It is noted that the New York Times specifically noted in recording this historic meeting, that "small countries" are never afforded this type of audience, unless it is to mock them like the Irish for being drunks on St. Patties Day. 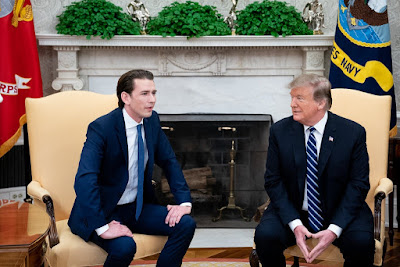 On Wednesday, Mr. Trump granted Mr. Kurz a one-on-one meeting and an expanded session with his senior aides — the kind of attention that leaders of smaller countries almost never get


In the Kurz world of global leadership, the Chancellor thanked the Trump weak links for attempting to obtain his good graces to save them from their crimes and then the Chancellor went on to meet with the World Bank and the IMF. 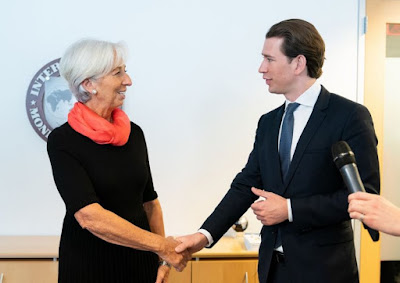 Christine Lagarde‏Verified account @Lagarde 5h5 hours ago
I was pleased to welcome Austrian Chancellor @sebastiankurz to the IMF today. We had a good discussion on the economic outlook for Austria, and the European economy more broadly. I also extended my gratitude to Austria for its support of our @imfcapdev efforts.


To make this perfectly clear, Sebastian Kurz after firing Donald Trump as world leader, went to visit the global banking houses which control the world economy. This is a monumental moment in world history and everyone has missed it.

I was also happy to meet the Austrian staff members at the #WorldBank. Thank you for your great work!

And what was Donald Trumps day? Not one mention of Chancellor Sebastian Kurz in proper etiquette, but he was raging about everything from blacks to Andrew McCabe, to this bizarre post about the completed New Mexico Wall.......which was one block of concrete and a pile of dirt. 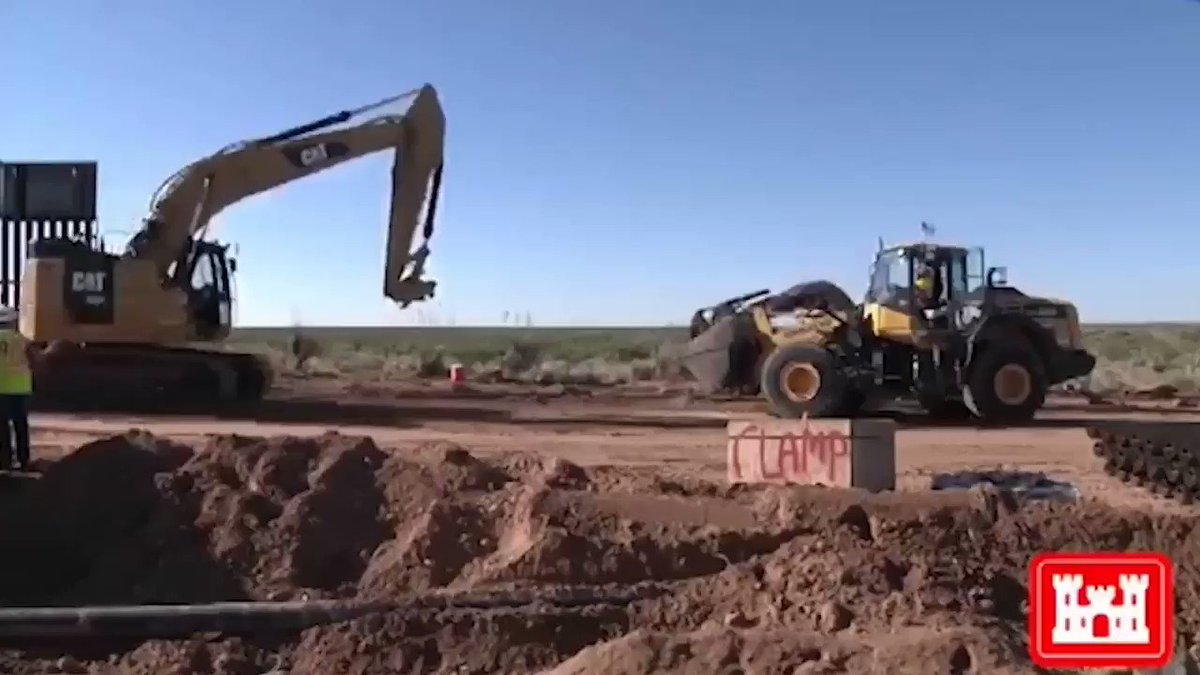 Donald J. TrumpVerified account @realDonaldTrump
We have just built this powerful Wall in New Mexico. Completed on January 30, 2019 – 47 days ahead of schedule! Many miles more now under construction! #FinishTheWall

The Lame Cherry picks this up again now in a fine series of articles by Zerohedge which has a profound insight to world events, because they view them from the correct perspective of the Slavic Peoples who for centuries have had to be the most astute people in always being fought over and in diplomacy and resistance learning to survive.
What the Hedge has been tracking is for the past several years beginning under Obama, there has been a mass repatriation of gold from London and New York vaults, led by the Germans and the Dutch. This is the reason why Donald Trump has been in such a fury against Germany in trying to Balkanize Europe for American control, is the Germans have pulled their gold out of the west and brought it back home to Berlin.

In the entire Kurz Summit, Donald Trump was attempted by the New York Times to be portrayed as 'grandfatherly" to Sebastian Kurz, when it was absolutely condescending, and in that condescension the President of the United States, ignorantly approached Sebastian Kurz as another small European state to fillet off of Europe for the Trump Balkanizing and crushing of Germany.
Sebastian Kurz is the kingpin of this entire European gold train and Mr. Trump's failure to comprehend that is as stupid of calculation of Franklin Roosevelt concerning Pearl Harbor which started World War II.

It is that gold and where it has been moved as the process is complete.


It is that gold which is in nuclear Eurasia with reserves building out of Venezuela and Iran which begins equaling the United States claimed reserves.
I stated claimed, because if one examines Zerohedge's articles, it is discovered that the Germans were delayed in repatriating their gold reserves, because the Netherlands was already pulling their gold out of New York.
That should be a warning sign in the Netherlands had only 600 tons of gold and the United States and England were halting German withdrawals of their 3300 tons, that translates to a reality that the gold is not in those vaults. That conclusion is significant, in the above realities point to that London and DC have  only paper promissory notes in those vaults, exactly as the looting of the US Treasury in Social Security funds. That gold is gone and it requires time for it to be reacquired from the sources holding it.


It was Chancellor Kurz though focusing after firing Donald Trump as world leader which is significant in the Chancellor was at the World Bank and the IMF, and there is almost 3000 tons of gold there on deposit which is the banking for the world economy, which is currently backing the bankrupt US petro dollar.


The IMF and World Bank are key in this in who controls them. It is not the United States as the Americans are outnumbered by 82% in the IMF and 85% in the World Bank. Who controls the world economic fund? It is the cartel, Nathan Mayer Rothschild leading the world elite in their international rapine and debt enslavement, and after Chancellor Sebastian Kurz fired Donald Trump as leader of the world, the Chancellor met with the financial house which controls the world and Austria's Habsburgs are about to usher in a new era without the United States from the old order of global prosperity for the cloth of the land.

I have been attempting to educate each of you in the movements of Chancellor Kurz in setting up the African consumers for European goods produced from Slavics, as Europa like a tidal wave moves past the United States with Asian technology and finance, from Singapore, South Korea and Japan.
The Rothschild cartel has been switching from backing the Americans to returning to their financial house in Europe.


IMF and World Bank Who are the people really running the IMF ...

The U.S. government has by far the largest share of votes in both the IMF and World Bank and, along with its closest allies, effectively controls their operations. In 1998, the U.S. held 18% of the votes in the IMF and 15% in the World Bank.

The World Bank-IMF is owned and controlled by Nathan Mayer Rothschild and 30 to 40 of the wealthiest people in the world. For over 150 years they have planned to take the world over through money.

As the indications are there that the London and New York gold reserves are paper, the gold holdings are now dominated by the Germans, IMF, Russia and China, with the French in vichy state to Germany and the Japanese growing closer to Vienna by the moment.  The leadership, the gold and the finance are not in American debt, but in Austrian Europa command. 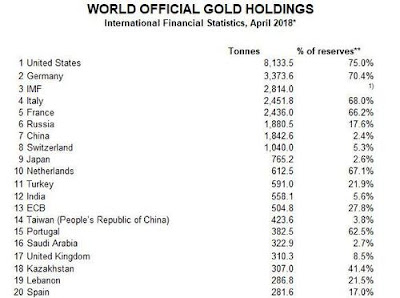 In the below Hedge links covering the history of this gold movement out of New York and London, you will note something surprising out of Bush Country in the Republic of Texas. Several years ago the Texans began moving all of their gold out of New York and into Texas vaults at 1 billion dollars worth of gold.

The Texas oil men are a Lindsey Williams knowledgeable association of the cartel. The Republic is not going to be stuck with banana republic dollars and is not about to find a paper note in it's deposit box instead of a billion dollars in gold.

It's Official: Austria Repatriates Gold, Confirms Loss Of Faith In Bank Of England

One week ago, the world was not exactly shocked to learn that after Germany and the Netherlands, one more country had unofficially joined the ranks of nations who have seen this all before and know how it ends, when reports emerged that Austria would repatriate 140 tons of gold from the Bank of England (appropriately immortalized in "this is what happens when you hand your gold over to The Bank of England for "safekeeping".) As of today, it is official.
Earlier today the Austrian Central Bank confirmed the Kronen-Zeitung report, and said that by the year 2020, it would hold 50%, or 140 tons, of its gold domestically, up from 17% currently. This means that Austria will withdraw some 140 tons of gold from the BOE which holds 80% of Austria's gold currently (and will soon hold only 30%) and send 92.4 tons back home to Vienna with another 47.6 tons being sent to Switzerland.

After Venezuela, Germany, Austria and the Netherlands prudently repatriated a substantial portion (if not all) of their physical gold held at the NY Fed or other western central banks in recent years, this morning Turkey also announced that it has decided to repatriate all its gold stored in the US Federal Reserve and deliver it to the Istanbul Stock Exchange, according to reports in Turkey's Yeni Safak. It won't be the first time Turkey has asked the NY Fed to ship the country's gold back: in recent years, Turkey repatriated 220 tons of gold from abroad, of which 28.7 tons was brought back from the US last year.
According to the latest IMF data, Turkey’s gold reserves are estimated at 591 tons, worth just over $23 billion. This makes Ankara the 11th largest gold holder, behind the Netherlands and ahead of India.

On January 16, 2013, the Bundesbank - one of the biggest gold holder in the world, with 3,378 tonnes - shocked the world: out of the blue, the German central bank announced that by December 31, 2020, it intends to store half of Germany’s gold reserves in its own vaults in Frankfurt, up from only 31% at the time. The plan would mean repatriating a total of 674 tonnes of gold, 300 from the New York Fed's gold vault, and another 374 from the Bank of France. The transfer, the Bundesbank explained, was meant to "build trust and confidence domestically, and the ability to exchange gold for foreign currencies at gold trading centers abroad within a short space of time."

Governor Greg Abbott today signed House Bill 483 (Capriglione, R-Southlake; Kolkhorst, R-Brenham) to establish a state gold bullion depository administered by the Office of the Comptroller. The law will repatriate $1 billion of gold bullion from the Federal Reserve in New York to Texas.

As Chancellor Sebastian Kurz moves on the world and moves past a world with America as a superpower for the risen beast of Europe, all of these gold depositors for the past years have become aware of something which is cartel generated and it all focuses on the New York Federal Reserve, and it appears more in depth than the rumor of less than full bank vaults.

Perhaps the reason for the Texicans moving their gold along with others is close to a scene in the cancelled CBS television series  Jericho, in which the wonderful star of the series Skeet Ulrich is searching for supplies in a nearby town and the vendors there absolutely did not want gold or silver for payment, as those precious elements were making people sick.

Whatever the reason, the gold is gone from New York and Chancellor Sebastian Kurz is arisen from the seas of the peoples of the planet and he is on the most friendly of terms with peoples who are holding the world future in thousands of tons of gold in their vaults. 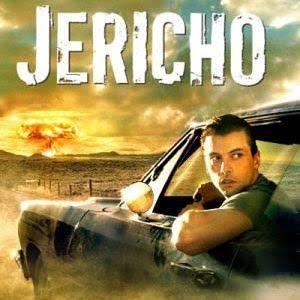