Why all of Robert Mueller's Report must be made Public 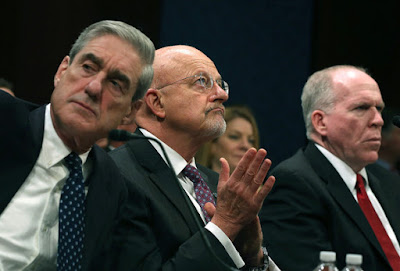 Oh my Obama !!!
Bob you put in the report I massaged John Brennan with my buttery head!!!

With rumors that Protector of America, Special Counsel Robert Mueller is about to conclude his investigation into Russiagate, there are indications the rumors are correct in the witch hunt team is indeed returning to their past jobs to terrorize Americans  and PoA has began shifting the case loads to prosecutors as he has deemed the Special Counsel not a prosecutorial body, meaning the Justice Department lawyers are trying the cases.

In that though now we have attorney Victoria Toensing who has been a fixture with her husband on FOX and Hannity from the beginning of this, in the rumor mill of all the FBI agents were going to resign if Director Comey did not indict Hillary Clinton, has once again appeared, and  is now advocating for the Special Counsel's report to remain concealed.

As someone who paid millions of dollars for this report, I demand to know what is in it, as this entire John Brennan to James Comey "trust me as I am white as snow" investigations are what began this entire fiasco. Transparency is the only check and balance Americans have left as the media is corrupt as the Congress in oversight of this entire issue.

Victoria Toensing: Why Mueller's report (no matter how much Dems clamor for it) must be kept confidential

From what Donald Trump's legal counsel has stated, there is nothing criminal in any of this report concerning Donald John Trump, only information in it which would be embarrassing politically.
Considering the past record of Donald Trump in pussy grab,  gifting women for sex and prattling on like a teenager coked up so that Chancellor Sebastian Kurz noted there was little in dealing with Donald Trump, there is nothing in this report which America and the world does not already know about Donald Trump.

In addition to a prohibition on the release of classified material, two legal restrictions apply: executive privilege and grand jury secrecy. During Mueller’s probe, the White House had no need to assert executive privilege, which is the president’s power to withhold certain deliberative and presidential communications from Congress, the courts and the public.

There is a rationale for protecting investigative material from public consumption. When people are investigated but not indicted, public release of that information injures the innocent, causing business losses and reputational harm, as it did under the Independent Counsel Act.


Ms. Toensing couches her argument in protecting the innocent who appear in this investigation. There is not one person who is not aware when you jump into any of this, that the people are smarmy, duplicitous and can not be trusted. I saw no one advocating for me when due to a remote viewing post in trying to protect the United States when the FBI dispatched Homeland to interview me on a wild goose chase, when no one appears on any other remote viewer's doorstep. I was a Trump supporter and it was August and the Kushner's were in the Balkans along with Joe Biden.  I was making too much of a wave and yet no one investigate Jeff Rense or Jim Hoff in being Trump supporters.

I completely agree that Donald Trump should never had spoken to the Special Counsel given the record of entrapment of others in the search for the Missing Link. Odd coincidence in that, as soon as I started publishing about the Missing Link, Robert Mueller and Lindsey Graham both disappeared after being weekly features and the most odd thing of all, as soon as the Missing Link was published here in who was behind this all, the Protector of America in Robert Mueller shut down the entire investigation into Russiagate and only the prosecutions on file would be carried forward.
Just odd in the coincidences of this, as  Robert Mueller's investigators were hell bent for leather in going after Jerome Corsi and Roger Stone in who their missing link contact was, and now it no longer matters, as the investigation shifts to Elijan Cummings in Atomic Islam corruption in Trump Trans building 40 nuclear power plants in the Mideast, with Jared Kushner getting a kickback for shepherding the deal in the main contractor purchased  Kushner's 666 New York skytower.

As for Mr. President, when  the Mueller report is turned over to Attorney General Barr, this President should sign a blanket pardon for all parties involved on charges not having to do with Russian collusion, as none  were filed and no one was convicted of that crime.