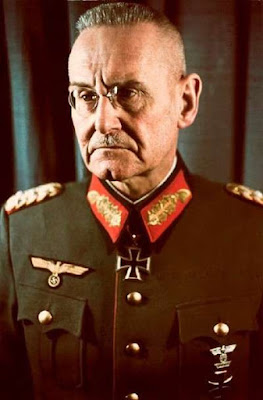 
What is fascinating in the saga of Adolf Hitler, was at a crucial turning point in 1939 AD in the year of our Lord, a division took place in the Wehrmacht between the Chief of Staff Halder and Adolf Hitler in the liberation of German territories in the west confiscated after World War I, in which Halder  desired to play it safe and literally negate Hitler's agenda, which began the rise of the general of Army Group A, Gerd von Rundestadt and his subordinate General Erich von Manstein. 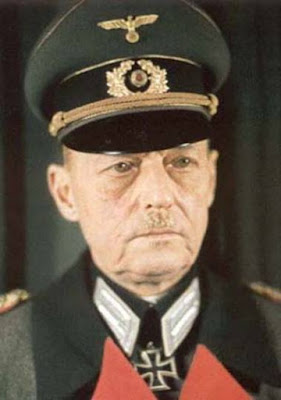 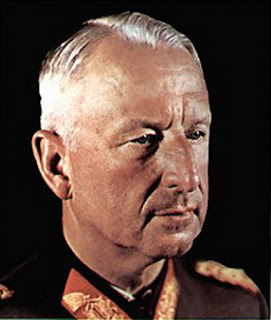 What is fascinating in this is the German patriotism which was involved in Rundestadt and Manstein, as Rundestadt understood Halder's plan to be a failure and refused to accept it, to protect  the Reich. Manstein in having not any agenda other than military operations, began voicing his concerns which Adolf Hitler learned of, and the more Manstein spoke, the more Adolf Hitler heard his own doubts and his own visions of objectives which could be accomplished.
Blitzkrieg was a military philosophy which arose in Germany and was the strategy of quick striking warfare with concentrated tanks, backed by air strikes. General George S. Patton of the United States would better the Germans in this in his combat fronts, but what was taking place in Germany was a drama of Adolf Hitler's vision, his Staff Officers playing it safe in not trusting this new warfare, and field generals undestanding the Gunderian tank strikes as the victory in the waiting.

What emerged in the Hitler Manstein conversations would be Operation Sickle Stroke. History has proven the genius of Rundestadt and Manstein to have been correct in defeating the French Maginot line, and the outflanking two armies, the British and the French and completing Adolf Hitler's first objective in driving English intrigue from the Continent of Europe.

For the crushing blow which Rundestadt and Manstein produced for Germany, both were rewarded, quite unequally. Rundestadt was given military control of Vichy France for security and Manstein would be called upon again to progress the war against the communist Soviet Union in brilliant masterstrokes of his center Army. Again and again Manstein would find the solution to smash the Soviet hordes with his battered army of Landsers, until the resources ran out, and the American assistance to the war criminal Joseph Stalin produced such a blunt force maul that the Germans at Kursk would expend themselves on too many delays as Russian defenses were built around the city and the German army in the east would fight a stalling war in retreat before the Soviet raping hordes.

Adolf Hitler by this time would replace his greatest general in Erich von Manstein with another who was a loyalist and would expend the German army to the last. Manstein was relieved of command and would join his superior who in the luxury of France had failed to stop the Normandy liberation of France.
France was a telling point in Adolf Hitler dispatched Irwin Rommel to defend France, and was completing preparations when the Allies struck. Rundestadt had dallied in the time as Rommel's theater superior and when the invasion appeared, Rundestadt was not able to force der Fuhrer to strike hard before a beach head was established. This was the time that the war was lost on both fronts, and like Manstein Rundestadt would be relieved of command.


It is fascinating in the "what if". What if Halder had succeeded in delaying the western front battle? It would have left two rather feckless armies on the west of Germany. Stalin was not yet capable of attacking Germany and was still in capitulation until the time that Hitler stuck in the east. It is a valid point that German U Boats could have starved England and France by sea in leaving a British army sucking the life out of England based in France.

Could Adolf Hitler have won by not fighting the war, and instead using Slavic concentrated labor, Romanian oil stores and German production built his army to such a crushing proportion that he could have brushed France aside along with England, before securing the Balkans and making a drive beyond the Urals to defeat the communists.

The wild cards in this were American support, which took two years to gear up, and the missteps of Benito Mussilini of  Italy in his failed adventures in Africa and the Balkans which drew Adolf Hitler in. If Winston Churchill had not bankrupted England, in placing that money into America, which was the British plan to take that money back in 50 years which was completed in the time of Brither Hussein Obama, and sued for peace, Greater Germany could have been a reality without war until a later date and only against Russia.
Once again if the German generals had counselled to force Russia to supply the fuels that Franklin Roosevelt cut off from Japan, which caused the Pearl Harbor attack, Japan would have had a land supply of oil to the Empire, and would not have needed to attack the United States out of desperation. In this, Germany and Japan could have then taken on the Soviet Union in the east and west and obliterated communism in a two front war.

The failings of Germany were not in beginning the war in Poland, France and then Russia as all were monumental successes. The failure was the midterm strategy in keeping America out of the war and being diverted by Mussolini's grandeur.
The key was oil supply, munitions and mechanization, to fuel a quick strike war.

The shortest distance to Moscow was not Kiev. The shortest distance to Moscow was  the General Patton maxim of "grab em by the nose and kick em in the pants". In this, Adolf Hitler should have had a holding force in attacking at Poland with Finland, but instead smashed by Romanian alliance and oil fields, through the Caucasus to the Russian oil fields and with that massive supply secured, produced a double hook to roll up the Russian Ukrainian Front and drove into the Urals, encircling the Russian interior and capital. With this type of operation, Erich von Manstein with the Panzers would have smashed the Soviet military and penned the Soviet hordes to not be raised by Stalin as replacements for his slaughtering his own men. Without the Urals, Russia would have had no place to run to move it's production from the west to the east. Japan would have held the forces there in check,  and when it was a fate complete, Adolf Hitler would have controlled Japanese interest as he controlled the oil. The British Empire would have been liberated and the United States would still be an agrarian nation producing ploughs and not bombs genociding their own race.

Adolf Hitler was impulsive, but pragmatic. If he could have had generals who convinced him that by attacking east, from the south, that he would crush the west and keep America from becoming involved in the war, the world would still be the national socialist order it has become, but the United States would still be a Republic. 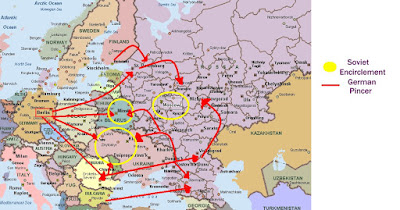 The order of battle should have converted Sickle Stroke to Thor's Scythe in the east.

The Wehrmacht would have produced feints on the Polish and Ukrainian fronts to hold the Russian forces in defence, while in the north, the Finns would have crossed to St. Petersburg as German advance would have secured the Baltics on a drive to St. Petersburg.
This would secure the north and all Russian supply in mop up operations.

In the south, the Romania front would strike into Ukraine in a holding movement on the Soviet flank, while the main blitz would drive to secure the Russian oil fields.
A  sealanding to the south would mop up the South Army's flank, before turning north to join with South Army Ukraine to make an encirclement of Kiev and Minsk.

South Army would then drive north to the Urals on Moscow's flank and link up with Army North.

If Stalin ordered his army to retreat to defend Moscow, it would be crushed in flank attacks out of Poland and Romania.  The logical position would be the Wehrmacht would in pincer movements of limited battle for attrition, three Soviet pockets, isolated and cut off from supply, especially reinforcement in manpower.

The major battle would be Kiev where 70% of the Soviet army would be cut off and killed. Minsk would be crushed before the Kiev battle to free up resources and to overwhelm the Kiev pocket.

It would be concluded that the Wehrmacht in control of food and the country, could go into winter quarters before the Rasputitsa of Autumn appeared, and use winter to starve out the Soviet hordes. After the Spring Rasputista, the Wehrmacht would emerg from winter quarters to smash Kiev, if by fortune the Kiev Pocket had not been taken before winter.

This would leave a starving Moscow Pocket for a late summer campaign of constriction, brought about by the  turning of Soviet artillery, tank and airpower production to rain down on Moscow.