The Devil At Your Door 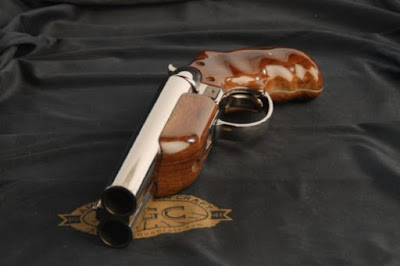 
Pictured above is the third love of my life, after God and TL, in this Shot Pistol, and it is why I really hate rich people, because if they were giving money for the exclusives here which Mockingbird  has blinded all by bribes to not cover, I would have a brace of these. I do not hate rich people so much though, that I would not inform them that they probably should pick up one of these bad girls for home defense or have it delivered to your mailbox, instead of having to fill out FFL forms doing background checks.

See the fine BATFE has deemed that all muzzleloading firearms are not guns, so no gun control. This goes back to 1968 in that unConstituational gun grab. That means that American companies seeking to provide defense to Citizens can build and ship these wonderful pieces of machinery to your mailbox, just like you once could order Winchesters from New Haven or guns from Sears and they came through the mail. Yes this was America when Americans were running it.

I was looking at this pistol and I believe in the comments at Guns America, that the children there were missing the point of this pistol. See Americans have that Dirty Harry 44 Magnum psychosis in thinking they have to load everything up like an atomic bomb, which of course hurts like hell to shoot, makes you deaf, probably gives you a slight concussion and makes it all unmanageable.

Here look at the specs of the Diablo. 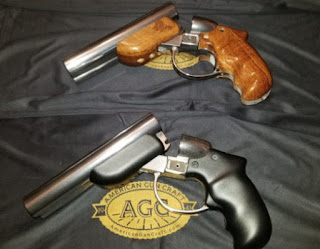 See when I read the specs, of this square load of 40 grains of black powder in FFg sized pieces on a 1/2 ounce of shot, I am instead thinking of the versatility of the deployment. One first has to understand that black powder burns slow, so it is not like nitro smokeless powder, in there is less of a kick, but more of a push.
Short barrels though do produce flames which in theory of a light rock salt charge which is what the old boys used to use for home defense as nothing convinced chicken thieves to not steal your chickens like salt shot into your ass, which then dissolved and burned like hell for the duration. I am not advocating such loads, but a light recoiling, flaming salt cannon might be more controllable and convince criminals to go hide under their dope beds.

In NRA published field stats, for all the people shot in crimes in America, there are at least 3 to 10 times more events where a firearm is simply displayed undrawn or held  in ready position which diffuses a criminal act. The mere presence of these two large barrels would convince in most cases a criminal to stop before the attack began.

If I was in Republican Governor Kristi Noem's South Dakota with Constitutional Carry, I would have two of these.  Of course my first thought after all of this, is how this would work as a pot gun shooting pheasants a rancher would happen upon.

What my original intentions though for a cab gun was a no longer manufactured Topper youth model in 20 gauge which was a real small unit. I was looking for a legal short barrel pump or a coach gun double in 12 gauge too, as my main focus would be on our drives blasting some bird or fur for supper. Those are not concealed carry guns as Terminator proved, but all the same, I am not that interested in Bama McCall shot pistols.
An owner would only have two shots, which would then require a long process of reloading and why the old boys never fired shots as an unfired barrel was more dangerous than an empty barrel blowing smoke. 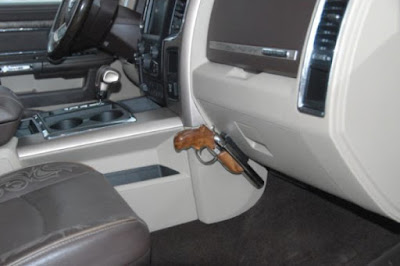 This is a reality though for law abiding Americans in this defense pistol can be purchased and shipped to your door without any forms filled out as it is legal. If I had one, I would work up test loads of buck and ball for defense as the Mics in the Civil War used and pattern a BB load, with a stinger load of rock salt.
It would be interesting to use plastic wads to contain the projectiles as this would extend the range and concentrate them. I  sit here envisioning this thing going off in the dark, and it would be a "Holy Fuck" moment with flames shooting out of the barrel. Yes the flash would temporarily blind all, but you should be bright enough to shut your eyes the moment you pull the trigger. That is what I mean in working up a flash in the barrel load with maybe rock salt. I am all for a non lethal load where someone could drive away before the criminals regained their powder flash blindness and were more worried about the burning salt in their skin.

I am not advocating this stuff, but if I had a  firearm like this, I would test it as the gun boys who get these samples never have any Inspiration in attempting to see what a bad girl like this would perform like.


So once again helping out the rich non donors and providing thought for those who might have missed this bad lady as it might fit in their world of defense.