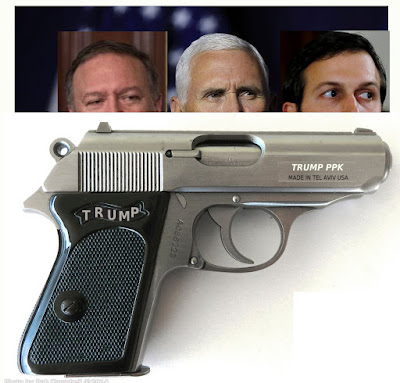 
It is always a good thing for the United States in the prelude to meeting the most powerful man in the world, Sebastian Kurz, for the United States to show how absolutely feckless and despised it is by the world community as it moves forward Tel Aviv policy for a two more  wars in the Mideast, against the Persian Islamocommunists and the Philistine Marxists, in hold a conference in Poland, which is only hosting this event due to bribes from thee Americans, as the important parties in Russia and China are not appearing, and the two parties about to be placed into nuclear holocaust ovens for Tel Aviv in the Persians and Gazans, decided not to appear as Auschwitz is right down the road.

Donald Trump's chosen weapon in this is the TRUMP PPK, unlike the German Walter PPK of enduring charm and protection, the Trump PPK is Pence, Pompeo and Kushner as the loaded weapon of the Pentajew policies which rule Donald Trump with Big Energy does not have Mike Pompeo in Europe the previous week, calling elected European Slavic leaders political bastards who are illegitimate and seeking to undermine the authority of Chancellor Sebastian Kurz in the new order of Europe in the old Habsburg peaceful dynasty.

Make no mistake about this in Prime Minister Benjanmin Netanyahu with Jared Kusher started this fiasco, when the Saudi's  renigged on backing the Jew peace deal for the Mideast in Jared Kushner and Jason Greenblat. Greenblat if you recall tweeted US policy of turning United States Citizens over to European prosecution on Jewish issues in renouncing American sovereignty. As this was not corrected by Donald Trump, and only reinforced in Greenblat appearing in Poland, this is now Trump policy for Americans to be deported over "Jewish crimes" to Europe to be prosecuted.

Netanyahu appeared at this meeting too, which was nixed when it was focused upon destroying Iran, as the Europeans would have no part in this. To put it bluntly, Jared Kushner could not get the Saudi's to agree on the Philistine issue, so to appease the Saudi's are war with Iran is on the books. Netanyahu tweeted that confirmation and this is what the agenda is, as the Europeans want no part of this, and sent humiliating low level delegations to Poland to send a message to Donald Trump.

That message though being received has PPK prowling around threatening Europeans in a second round of this war enterprise.

Also attending was Israeli Prime Minister Benjamin Netanyahu, who stunned attendees by announcing in a tweet that he was sitting down with leaders of Arab states to discuss their “common interest” in combating Iran. Few Arab leaders can acknowledge sitting down with an Israeli official to discuss anything, much less war on a regional power. Netanyahu’s tweet used the phrase “war” with Iran — bellicose language even by his standards — and his office later changed it to “combating.”

This is a prelude to war with Iran make no mistake about this as that is what PPK is. This Tel Aviv policy sanctioned by the United States where Americans will die and lose billions more in another Jewish finance war. Make no mistake about this as none of this is about Iran nukes, but about two issues, Greater Judea and the fact that Iran is now involved in a gold currency end run around the rotting US petrol dollar. Each time a nation as Libya or Iraq attempt such an outcome, war follows.  As the protagonists of Europe in London, Paris  and Berlin are backing the gold exchange as the gold is flowing to those nations, the United States can weaken them, but not bomb them. So therefore the projection of this is to take the gold of Iran first and then have a situation instigated to have Russia bomb the gold whores of Europe and be blamed.

Before leaving for Warsaw, Israeli Prime Minister Benjamin Netanyahu told reporters that the point of the summit was obvious.
"The focus is Iran," he said. "This brings together Israel, the U.S., and countries in and beyond the region. There will be interesting meetings there."


Austria in observing this, knows completely what the United States is engaged in. It is the literal Balkanization of Europe, the scorching of Slavic nations in a major war,  and the shattering of the Habsburg's vision of African consumers, buying European goods, supplemented by the Pacific rim of China to Singapore. This is what Big Jew finance of the Rothschilds in action looks like when a great prize is in reach like Jerusalem  for their global control. Europe was a holocaust oven for poor Jews by the elders. Europe will now become a scorched earth for the greater agenda.

Austria of course will of course quietly absorb this and move on with their agenda of creating a world without the United States in it to compete.

As Bank of London MI6 Jewish finance placed Khomeini into power in Tehran, this is their cash cow which is under the slaughter block. A war of chaos to bring about a new order is what Albert Pike stated would be the initiated response for the last world war. I would rather there be peace in George Washington trade deals worked out with Vienna, Moscow and Tokyo in the Kurz Doctrine, but thrice in the prelude to Sebastian Kurz  coming to America, the United States has deliberately made direct financial attacks upon Europe and is now from Tel Aviv promoting the next Mideast wars which in all probability will drive the Americans from the region in humiliation with Russia and China involved, absorbing thee American forward bases.