When an enemy is more of an Ally 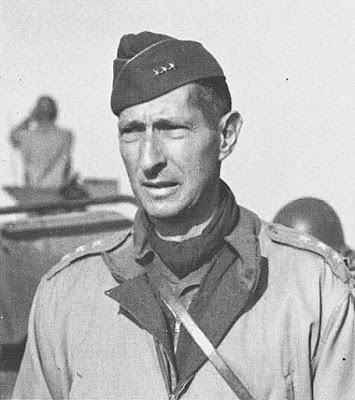 In the examination of John Keegan's history of World War II, one glaring reality appears in the American propaganda which heaped praise on the American Soldier from Guadalcanal to Anzio, and that praise was due to the fact that the Americans only had hard fighting not from the Japanese or Germans, but due to absolutely deplorable Generals on site, along with typical incompetent British leadership.

Nothing typifies this more plainly that Italy.

The build up to Italy was a brilliant campaign by General George Patton, with the British General, Bernard Montgomery as a slow moving British tourist. This hard fought operation on Sicily should have opened the door to an American sweep into Italy, based upon the brilliant shore landings of General Douglas MacArthur in the New Guinea campaign in the south Pacific. Instead what followed was a punishment not only for the Americans, but the Canadians came to believe that their British Generals enjoyed spilling Canuck blood as paint for the rocks, as the Canadians took very heavy casualties.
The North Americans had a very hard time of it, as even the Americans commanded by General Mark Clark, were regional armies, and in this Texas as bloodied needlessly in absolutely criminal operations which should have had the commanders of Britain and America taken out and shot.

On the German side, Adolf Hitler had two opinions. One from General Rommel who counsled against making a stand in Italy, and one from General Kesslring who thought due to the Italian terrain, he could make a very costly Allied offensive campaign as the Germans held defensive positions.
Kesslring was correct, but he was assisted by incompetent British and American leadership in Italy.

The American 5th Army was ordered on the approach to Rome, which meant Cassino, the fortress was to be taken. The river Garigliano had to be crossed and in this 1000 Texans would perish with no notice by the Germans in the repulse. Cassino was not taken and there the Americans sat exposed in the Italian winter.

In order to "break out" of Cassino, British General Bedell Smith had a plan to do a beach landing at Anzio. General John Lucas was in command of VI Corp,assisted by the 1st Armored and 3rd Division.
The Anzio landing caught the Germans completely by surprise. In fact Lucas could have driven to Rome, where he would have been surrounded on capturing the city and been wiped out, but instead of advancing his beach head, Lucas landed more equipment into a small area and stood around for the day and eight more days. When Lucas attempted to move inland on January 30th, the Germans had moved troops from quiet parts of the line, assembled returning Landsers, and had created the 14th Army which repulsed Lucas' forces.

What would follows was Lucas was sacked and the Americans would be involved in a bitter cesspool with no way forward or to retreat. 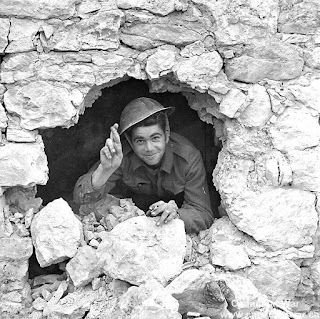 For us Canucks, the Limeys killed more of us
than the Krauts eh.


Much of the "Allied Armies" were at this time being removed in the better American and British troops, Montgomery himself had left the field after being stopped by the Germans, for a D Day landing, but what appeared in Italy was what anyone would deem a castatrophe of colonial and foreign troops.  The two marked disasters would be the Polish II Corp which the Wehrmacht had just gone through like shit through a goose, and a French colonial tribe of mountain people led by General Alphonse Juin. What followed acquitted these two groups as where the American and British generals had failed their troops, Juin assured the allies that his Moroccan mountain people could get through the German lines to the Liri Valley.
As the North Africans took up positions, the Poles smashed into the German Herman Goerring paratroop positions at Cassino and accomplished in suicide missions what no one else was able.

Clark was to link up with General Truscott's Anzio beach head which was performing a break out, and encircle the German 10th Army, crushing it, obliterating it, and then carrying the day to Rome.
Clark though countermanded the orders of British General Alexander who Clark was certain was plotting against him for glory, and instead of encircle the Germans, allowed them to escape as Kesslring's forces fought delaying actions as Mark Clark drove off to "liberate Rome".

As Keegan recites history, the Italians were hiding in Rome and no one came out. Clark arrived in the city on June 4th to deathly silence, as the Germans maneuvered north to the last Kesslring line of defense in the Gothic Line.

So ends the operations in Italy for the long miserable sacrafices of Americans and Canadians, being used up by the most atrocious incompetent leadership, as France was now the beach head of landing west and south. In those cases, the Americans under superb leadership in the French south, quickly drove the Germans back, and after two fierce battles pushed the Germans into full retreat. So having a General in command actually does matter on the field who comprehends the necessity of speed and maneuvering as one exploits an enemy's weakness.

In all of this though there is the exhibition of the reality in the long heralded hard fighting that Americans were told of, it had nothing to do with Germans or Japanese. It had to do with incompetent American leadership and worthless British allies.

This avails itself in the coming Great Eurasian War as the same strategic battlefields will be engaged, and the same landings. Armies will have to resort early to hybrid weapons of mass destruction to clear out the hard to assault areas, as no army will have the luxury of failure or slugging it out for 3 months or 3 weeks.