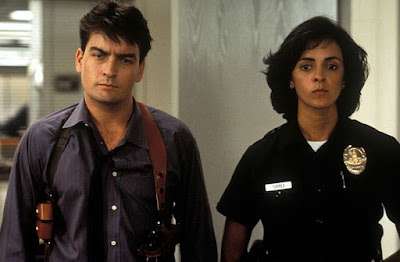 We've got another tough one Roberta, that is why Lame
called us in as she is trusts your breast size.

I have never thought that sex with Donald Trump would give you nightmares, but apparently a cheek kiss will give former double Obama voters nightmares, therapy and ......I think that is what Alva Johnson has reported has plagued her for 3 years after Donald John Trump, looked her up and down and appreciated her and no one quite knows what happens again as there were not any witnesses, and the witnesses there like with Brett Kavanaugh deny anything happened. 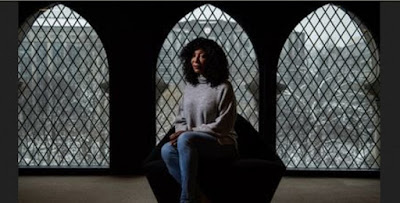 
I prefer in this to use my method of detective work in who you should believe, when the truth can not be discovered.

Like Alva is fuckaliicous from a distance, Posed in front of that Muslim window thing, with her big 45 DD breasts looking all comforting, and she looks in pretty good shape for an old broad.....because she got those quadroon genes going for her in White bloodlines.
See Michelle Obama got those saggy B tits that are like two feet long, a big ass the size of two states, she is ugly and had a vagina that looks like it could win the Olympic weightlifting championship for gold.

Now that we have this set in the proper order, we can ponder if we believe Alva's large comforting breasts or Donald Trump's cock.

Here is Mr. Trump's penis weighing in with comment after Sarah Huckabee Sanders has denied all of this again.

As you can see Donald has an eagle perched on his balls in denying he tried to kiss Alva. I believe that having eagle talons embedded into your scrotum proves you are tougher than shit laid by a constipated T Rex, but I believe we must proceed in this further to the witnesses. 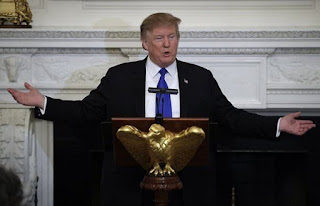 Enter Attorney General Pam Bondi,  a woman not molested by Judge Roy Moore. She is blonde, but we will not hold this against her. She says she say nothing inappropriate, which probably means Donald Trump was looking at the RV that Alva was in, in saying, "NICE NICE" and when he leaned in to thank her, he probably tried to get some the brown sugar on his slow poke, but all the other women liked having Donald DNA on them and had fantasies of Marla Maples.

Ignoring all of that, we examine Ms. Bondi. She may be a brunette which we do hold in her favor as we like brunettes and is a bottle blonde. Also she has red lipstick pouty lips, wears pearls well promising she likes kinky sex, and has on Pelosi virginal white, covering very ample DD comforting breasts.

Weighed against Alva, Bondi wins in brunette highlights, pouty lips, and better sexual fashion sense and I must say her comforting breasts look fuller. Perhaps it is her time of the month, compared to Alva, but I think we have to give the edge to Pam Bondi over Alva Johnson in believing Bondi.

That though is her said she said, but fortunately we have another witness involved in this quad way in an RV in Bamaland. 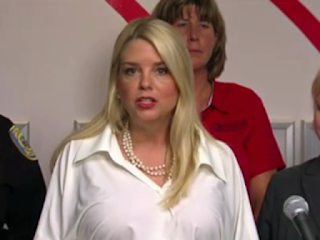 The other witness is Karen Giorno. Karen has it all in the balance as she has not aged well. While she does look like that hot Lisa Page, she has that non Ivanka nose, flabby upper arms, but she does have those guppy lips, an overbite and sister does she have cleavage detonating out of that low cut dress.

This is a hard one, as Giorno has  just D breasts, which are a bit 42 large, but still smaller than Alva's 45's. We like her Italian tan more than Alva's quadroon, and I know that sounds like we are reaching in bias for Giorno, it does weigh as she has the Roman nose and we can all agree we would rather have the bloodlines in bed of the Roman toga orgy than the slave girl who rolled around with the dogs.
The thing is Alva has that Johnson genes going on, and who has not wanted a Scandinavian Brunhilda riding them like the waves of the Hjemkost

I think it is close in this, but damn it, I just have to give it to Alva in this one. 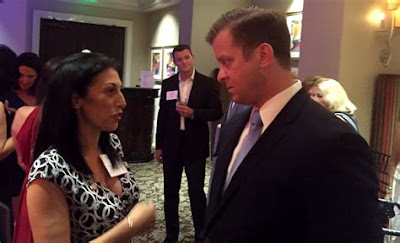 
So in the wrestlebacks of this, we have Pam Bondi pinning Alva Johnson, in the first round, but a decision of Alva Johnson over Karen Giorni. I know it is hard for anyone to beat someone twice, but when it all adds up we got Pam Bondi's very  full 46 DD's and Karen Giorni's 42 D's in flotilla against Alva Johnson's 45 DD's.

When I add this up in Teddy Roosevelt 1812 firepower, you got two almost equal frigates in Bondi and Johnson tracking the weather and you toss in the heavy cruiser of Giorni, and when you have all that going on, even without an eagle perched on Donald Trump's balls, and denials by Sarah Huckabee Sanders, and you just have to believe the breasts of Bondi and Giorni, over the breasts of Alva Johnson, because they were once perky for Birther Hussein Obama.

Maybe if Alva Johnson had not gone 72 Virgin poses and instead went Tina Turner in showing off her wares, we might have gone over the top with her, but you just have to take points away from a black woman who does not wear animal prints and more to the point, the nightmare of Michelle Obama's two ruler sagging tits are an automatic deduction in that ghetto green vomit which no accuser can overcome.

Donald Trump needs to haul around a case of plug tobacco and this would solve all of his problems as Masters used to invite their mammies up to the White House for a romp and not send them away empty handed. They would hand the Negress a chaw of  tobacco and she would take it home to her breeder who would take a chaw and wait  for the next time when the tobacco ran out.

See Donald Trump does ok with ex wives, but he runs into problems in paying women for sex or in getting a little and not paying the woman enough so she does not feel like a whore.
Omarosa was treated very badly by John Kelly, who did not give her a chaw of tobacco for all she did. Obviously Alva Johnson thought she at least deserved her pussy grabbed  as what Donald was giving out was not enough and this made her feel unappreciated.

Always bring along the tobacco or you will run into the trouble Donald Trump does, as you can not rely on White Makes Right, when a little chew is all you have to do, to make things right.