A MAGA AOC SUCK IN MICHIGAN 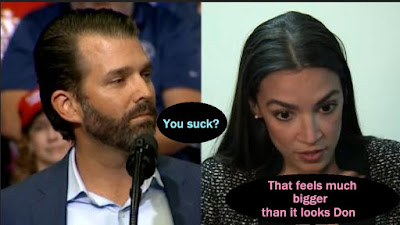 I do not understand the lack of chivalry in Michigan MAGA Republicans who once Donald Trump jr. mentioned the woman who is always on his mind, and who he calls the name out in bed during sex, in Alexandria Ocasio Cortez, the Michigan rally goers demanded that AOC suck Don's sexual organ.

I'm not a communist plant from the CIA  like AOC and I'm not a practicing fascist like Don jr. Hell I'm not even like Donald Trump in being Conglomerate Nazi. I'm not even like the people of Michigan demanding Don jr. get's his dick sucked so we all can get on with our lives, as this fixation Don has with AOC is understandable as she is intelligent, gorgeous and forbidden fruit, but America needs MAGA not a romance between Nazism and Marxism every few minutes on Twitter.

Don jr. needs to man up, stop being  putz and propose to Alley, as she is a good virgin who wore white, on orders of Nancy Pelosi, to show she has not had her cherry wrinkled by that fat white boy she keeps in tow as her boyfriend  in waiting.
Granted Don jr. looks like Hermie Munster, but AOC does like to flirt with the guy, and I think it is a bad choice as AOC is coming out of the chute cherry undented and Don jr has baggage of divorce and kids, so it probably will not last. But people have to make their own mistakes.

The Lame Cherry arises though and calls for chivalry. In Republicans should demand that AOC does not do a thing until the gets a ring, which is the proper way to do things. I also would prefer Don jr. would be pressing for making his old man keep his 2016 promises.....you know like national carry laws without license,  no one earning under 50,000 paying any income tax, ending aborticide and peace with Russia as I want some of those cheap well made Russian firearms.
We simply do not need Don jr. mentioning his true love and Michigan MAGA's chanting for blow jobs.