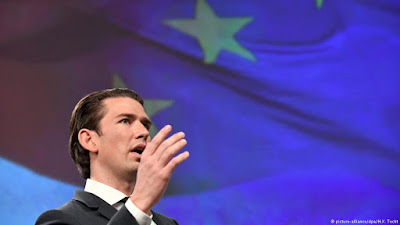 
Chancellor Sebastian Kurz is truly remarkable leader who is destined to not only change times and seasons, but has changed prejudices and bias like the world has never experienced. It seems there is nothing he can not mix, as oil and water in his presence are bonded like long chain chemistry, moth to flame, bees to honey,Jews to pounds of flesh.

The Chancellor a week ago held the first European Arab Summit. Everyone came and everyone was pleased. The week before Donald Trump hosted a "HATE IRAN" Summit in Poland and few came and no one was happy.
The thing is the Chancellor after  having a most enjoyable meeting with the Arabs, immediately went home and torched the Muslims  in Austria and no one said a word.

See the Saudi's dislike the diospora as they are pilgrims. Iran has no time for Muslims not burning down Paris, and everyone in this detests the Turks which is what most of this crackdown in being pro Jewish is about.
Yes everyone was treated like a cum dump by the Ottomans and no one wants to see them return to power or anyone protecting their vermin which run over the land. A Turk just has that way about them in knifing everyone they meet. Germans, Persians, Saudis and Jews are all alike. It is as if the human carcass was built for a Turkish long blade to be put into that sheath.

So Sebastian Kurz is not going to psis around like President Donald Trump in keeping his rapists and murderers around, as the Chancellor knows that political refugees are the shit that the Koran flushed from Islam.
I mean Islam is a religion which beats the hell out of people to make them mind. Do you realize what the hell kind of wildcat you got on your magic carpet ride if Islam can not grab them by their ovarian balls and make them mind?

Look at them mothers who suicide bomb their own children because that is how you abort your miserable children. Mecca, Tehran, Tel  Aviv, they don't want that shit in their countries as they are just trouble, so they get rid of them as there is only so much jail space and sword action to lob off heads. Sebastian Kurz does not want that shit in his Europe so it is just the best thing to dump them into the United States and Canada, as that makes everyone happy, especially the Jews, as this is always couched in racism anti Semitism and how short Ivanka  Kushner's skirt is.

Make the Jew happy and you have achieved the impossible and that is the miracle of all of this in American oil made the Sunni happy as they genocide Americans, atomic bombs made the Iranians less  unhappy like being constipated by the Obama laxative, and Sebastian Kurz now has it all, in he can tell Jared Kushner his peace plan sucks shit while eating out Ivanka and soon it will be Kurz Pax across the the Mideast to the joy of every Jew boy and girl.........until the occupation comes.

The ÖVP-FPÖ government has announced an initiative against political Islam. Chancellor Sebastian Kurz (ÖVP) is called upon to "protect our free society from political Islam and its excesses such as anti-Semitism" and announces the creation of a Documentation Center for Political Islam, modeled on the Documentation Archive of Austrian Resistance (DÖW).

The results of the most recent anti-Semitism study have shown that there is a need for action. "The strong migratory movement of recent years has brought new cultural currents and ideologies to our country. The increased violence, the rising tendency to anti-Semitism and the widespread rejection of social achievements of our democracy in individual population groups makes it necessary here to intensify investigations and to engage in educational work, " is stated in a position paper of the government.

The planned documentation center - corresponding plans had already leaked in January - should be similar to the cult center or the DÖW and observe ideologies "that undermine democracy and the rule of law by rejecting our legal and value system or motivate even to violence and terror". It is to be created as an independent institution in cooperation with various ministries (Ministry of Culture, Ministry of Interior, Ministry of Education, Ministry of Foreign Affairs), perform preventive and educational work as well as basic work, and recognize concrete threats.

The work should be accompanied by a scientific advisory board, scientific studies and the publication of an annual report. Islamist associations and organizations, Islamist ideologies in social networks, segregation in education through Islamist currents, as well as the spread of patriarchal courts of honor and contents that are hostile to integration and undermine the rule of law are to be observed.

By the summer, a concrete law will be presented. From the beginning of 2020, the institution should start operating, according to the government's plan.

"Can not look away"

"We must not look the other way when our core values, such as democracy or equality between men and women, are openly rejected and replaced by a different social model. Rather, it takes a determined approach at all levels to counter these massive aberrations, be it in education, in mosques and Islamic associations, or in social media. Among other things, that is the reason why this federal government was elected," Kurz explained the project of his government.

Vice-Chancellor Heinz-Christian Strache (FPÖ) described "Islamism" as the "greatest threat to our free society". "Establishing an observatory against political Islam is the right step at the right time. You have to fight the beginnings."

Yes Chancellor Kurz is running on all cylinders like a Mercedes Benz. Those headlines say it all in only the Austrians are enlightened to produce the Solomon solution, based on the scientific evidence that Muslims in Europe are like hydrogen and atomic bombs put together and the high morals of the right legger Catholics of the historic Nazi now reformed and loving the Jew, can not look away and let a holocaust happen again.

I tell you I can see Chancellor Sebastian Kurz doing all sorts of great things from building peace Temples to making Jerusalem his footstool. He is so loved by everyone what else could happen, but all of this transforming the world for the price of Turkey being buried as she should be for sins of the Ottoman.

That about wraps this up as one can only adore the Chancellor so much as there is little room with everyone adoring him. I do not suppose he could spare a few cup fulls for Donald Trump, but that is just the way it is in everyone wants to be on Austria's Magic Carpet Ride.