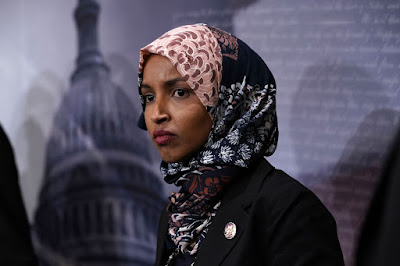 In Somalia I would burn your whiteness off, drag you through the streets,
and hang you from a bridge.

I commend the set up of FOX Molotov thrower in baiting Inky Omar with a standard ambush of two baiting questions, which Omar would not talk to a White male from the hated FOX news, in this though note that, the question is first phrased in the White man ahead of the Chinoid Obama, and Omar does not respond.

Next question, FOX asks Omar to defend herself.........she is silent.

Third question it revisits, the Trump Obama axis, but this time asks Omar if the Negroid is the same as the Caucasian. This is the question which sends Omar through the roof in which her true hatred of White men comes out in Obama is defined as the human and Trump is not a human.

With this reaction, it would be most entertaining for right wing media to bait the ugly face of American Marxism with her Obama's heel. The key is to compare the inadequacies of a Negroid following in the White man's shoes, and asking if the Negroid is the same as a White man. I would add that baiting her with Jew comparison would be most delicious.

Example along the lines of 'Barack Obama mentioned to the president of France that Benjamin Netanyahu was a consummate liar,  do you think that Mr. Obama has the intelligence to make that assessment as the Prime Minister is a graduate of MIT and Mr. Obama was an affirmative action Harvard graduate."


Omar is not only the ugly face of democrats, but the brain not as intelligent as Alexandria Ocasio Cortez, the Jewish girl.