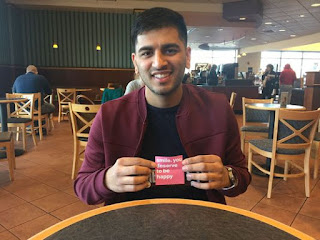 OK I'm really out of the loop in life, so when I was watching Impractical Jokers, a commercial come on with some mello shitty song "Give a little bit" playing and this Ahmed and Mustafa were handing out Hershey's candy bars.

Hershey's Melting the Distance Between People, One Chocolate ...

https://globenewswire.com/news-release/2018/09/13/1570342/0/en/Hershey-s-Melting-the-Distance-Between-People-One-Chocolate-Bar-at-a-Time.html
To do so, they stocked up on Hershey's Milk Chocolate Bars, attached notes and gave them out around campus. Now, the pair - Mustafa Hussain and Ahmad Atieh - are known for their simple ...

https://www.mycentraljersey.com/story/news/local/outreach/caring-communities/2017/03/15/giving-candy-strangers-rutgers-students-go-viral-sweet-message/99121610/
Rutgers students Mustafa Hussain and Ahmed Atieh aim to bring positivity and happiness to their community. Handing out candy bars with a positive message, the Old Bridge men left smiles and happy ...


Seriously, how damn long has America been screaming at kids to not accept candy from strangers, how deviants spike Halloween candy, how sex perverts drug candy.......hell back in the day they used to drop acid in sugar cubes to send the 1960's primates trips without leaving diners.........and now we got Hershey's chocolate candy bars as the faces of what everyone is terrified over yet in 9 11.


I won't eat free samples in grocery stores, so I sure as hell am not going to be chewing on chocolate from two Muslims handing out candy bars. This is like a CALL HOMELAND  in you see something you say something.

So what comes next, old men in raincoats, opening their rain wear, and handing out Snickers to kids?

There simply are some things which just should not be done, and when Kim Jong Un cons and idiot girl to go spray WMD in the face of his brother, thinking it is a reality TV show, how long is it before ISIS starts handing out candy bars to idiots on the east coast, as apparently any semblance of "THIS IS NOT A GOOD THING" has vanished in this Trump America.

Lord God this conditioning is not a good idea.