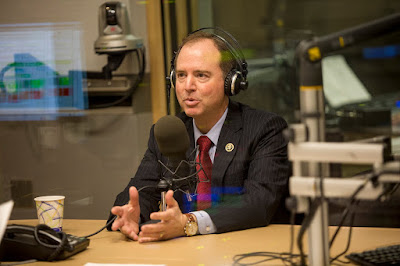 I have observed the antics of Adam Schiff of California, not only abusing his position in Congress in aiding in the framing of Donald Trump, utilizing fake information provided by then Sec. of State John Kerry in a massive and illegal, document dump, fostered directly by Barack Hussein Obama, Michelle Obama and Val-erie Jarrett, provided by the illegal activities of then CIA Director John Brennan, but the harm that Adam Schiff assaulted the House of Representatives today with, is the thing of 3rd world Banana Republics.

Adam Schiff has been urged by Republicans to step down after his past two years abuse of his position as leading democrat, but today in a  meandering, self ejaculation of whining, Mr. Schiff, shut off the mic of another Republican who was attempting to speak to address, the diatribe which Schiff unleashed.

The Peoples House, home of the free intercourse of debate, and neither British in 1776, American Civil War in the 1860's nor world wars have accomplished what Adam Schiff engaged in, as this Jew summoned himself to Capitol Mount to deliver a sermon which had nothing Christ blessed about it, but was the adulterated bastard offspring of Pissgate, in again attempting to frame Donald Trump, this time not on criminal or illegal charges, but on the holier than Schiff demagoguery of "I don't think it is ok so, but I am going to cast the first stone!"


Schiff said Thursday that the evidence collected by the special counsel’s office demonstrated that President Donald Trump and his associates had behaved in a way that was unethical, corrupt and unpatriotic.
“My colleagues may think it’s OK that the Russians offered ‘dirt’ on a Democratic candidate for president as part of what was described as the Russian government’s effort to help the Trump campaign. You might think that’s OK,” Schiff said to Republican lawmakers during the hearing. “My colleagues might think it’s OK that when that was offered to the son of the president, who had a pivotal role in the campaign, that the president’s son did not call the FBI, he did not adamantly refuse that foreign help. No, instead that son said that he would ‘love’ the help of the Russians.”

There is absolutely nothing more cowardice, more anti democratic, and more anti American, than attempting to silence those who have that right to speak. It is weak, it is feckless, it is what Adam Schiff is now the poster boy for.
Adam Schiff ended with the judgment has lost it's way, by abiding by the rule of law, instead of microphone political assassination. Adam Schiff in this stunt has proven he is unfit for heading any committee in the United States Congress as much as he is unfit for elected office. Adam Schiff is the antithesis of elected government, by, for and over the people.

Adam Schiff should face Expulsion from the United States House of Representatives, as he is unfit for office and everything the People's House represents.Adam Schiff represents a leftist group which has zero respect for the Constitution of the United States. In the US Congress today, he violated the right of free speech and peaceful assembly.

Of course in the corruption which is this federal travesty Adam Schiff will not be removed by his equally corrupt comrades. It requires being stated though as it does stating definitively that Adam Schiff was wrong, wrong for the democratic party, wrong for the US House, wrong of California and wrong for the United States of America.