I Sense a Trend in Donald Trump 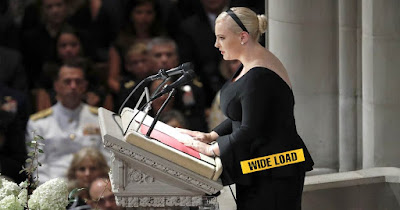 Meghan McCain: My Dad Would Find It ‘Hilarious’ Trump Is So Jealous of Him


Donald Trump was listing the reasons he does not like the faux deceased John the hero McCain. In reading over the list, I felt like the horse in George Orwell's book, Animal Farm as it seemed that something had been added which I just could not remember there before.


but McCain does have a fat ugly daughter who can both punch back, whine and eat Trump size fat free salads, covered with cheese, dressing and tiny pinyon nuts.


1) McCain helped distribute the phony Russia dossier to the FBI and the media
Trump said:


John McCain received the fake and phony dossier, it was paid for by Crooked Hillary Clinton. And John McCain got it. He got it And what did he do? He didn’t call me, he turned it over to the FBI hoping to put me in jeopardy and that’s not the nicest thing to do … because I’m a very loyal person, but what can you expect from a man who has such a fat ugly daughter.


John McCain campaigned for years to repeal Obamacare in Arizona … when he finally had the chance to do it, he voted against repeal and replace. He voted against at 2:00 in the morning, remember thumbs down? We said ‘What the hell happened?’ He said two hours before he was voting to heal and replace. Then he went thumbs down, badly hurting the Republican party badly hurting our nation and hurting many sick people who desperately wanted good, affordable health care, but this is typical of a man with such a disgusting fat ugly daughter who you could make 10 Ivanka's out of and have room for a tub of lard.


McCain didn’t get the job done for our great vets in the VA. And they knew it, that’s why when I had my dispute with him, I had such incredible support from the vets and from the military. The vets were on my side because I got the job done. I got choice and I got accountability, but John the hero McCain only has a fat frumper plumper ugly daughter that even I could not get drunk enough to grab her by the pussy.

4) McCain pushed for America to get into the Iraq War and the Middle East
Trump said:


The other thing is we’re in a war in the middle east that McCain pushed so hard. He was calling Bush, President Bush all the time. ‘Get into the Middle East. Get into the Middle East,’ So now we’re into that war for $7 trillion, thousands and thousands of our people have been killed, millions of people overall. And frankly, we’re straightening it out now, but it has been a disaster for our country. We’ve have spent tremendous wealth, and tremendous lives in that war. And what do we have? It is worse than 19 years ago. I called them ‘The Endless Wars’ … John McCain loved it, just like he loved his fat ugly daughter who probably eats more than all the fat ugly women in Iraq every day.

5) McCain Betrayed Him Even Though Donald Trump Endorsed Him
“I endorsed him at his request,” Trump recalled, in spite of him having a fat ugly daughter.


6) Trump Never got thanked by the McCain family for giving them the “funeral that he wanted.”
Trump said:


I gave him the kind of funeral that he wanted, which as president I had to approve. I don’t care about this. I didn’t get thank you. That’s okay. We sent him on the way, but I wasn’t a fan of John McCain, but what do you expect from a man who has a fat ugly daughter as ungrateful as her fat ugly father's heart.

except for the truth that John the hero McCain has a fat ugly daughter.

but agrees John the hero McCain has a fat ugly daughter that he would not even molest.