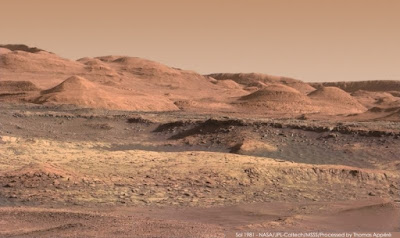 As another lame Cherry exclusive in matter anti matter.

As ours is a world where we have only the real evidence of how a world should really look like in a universe of random chance, I have been looking at photos featured on Jeff Rense's site concerning Mars and in those photos I am puzzled.

In the above, is what one would figure would be Mars, a sort of waterless Middle East or Gobi Desert, which has the geology of heating and cooling, with no plate action to produce sharp mountain ranges and a sort of windswept  landscape or wind  abrasion.

There should be patterns as on earth. Patterns of a once active world which lost it's meteorology, a sort of world unplugged without volcanic center, electric storm atmosphere and the ingredients of water to produce a dynamic, which has now gone silent as if a door closed and nothing has changed for centuries. 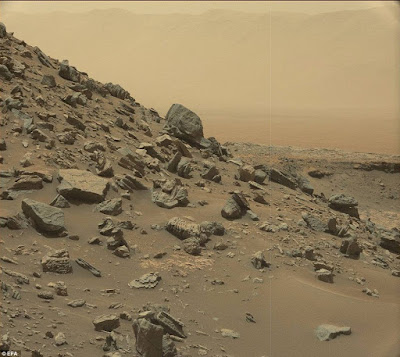 I was pleased in the Mars photos that the atmosphere of the red planet is far more robust than has been addressed. The moon has black as night skylines without air. Mars though while not having the blues of earth in lacking water, Mars has hues of dust, of a reflective atmosphere and a revealing that this is a world capable of dome colonization, with harvesting of water bearing icebergs from Jupiter's moons, and a terrarium of humans. 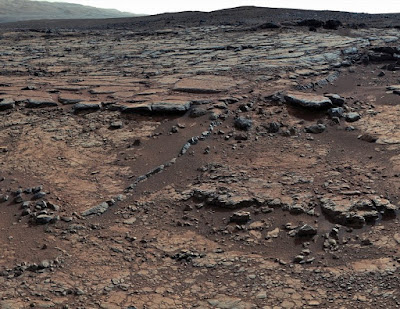 In all of the first 3 photos, there is continuity. Heating and shrinking, removal of water, erosion with pleasant little Appalachian rounded forms. Colors of red and blue are acceptable in soils of iron and copper. Even whites are appropriate in calcium, as parts of building blocks of once upon a time life like the White Cliffs of Dover
There appearing though in soft soils of lunar appearance of white heaps is of interest. 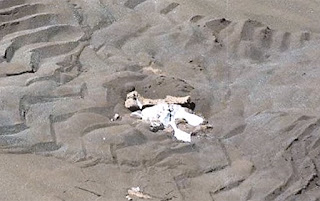 The white makes it's appearance in the fields of blue stones and the reddish iron soils. The problem is how they have arrived and what force shattered them.  This is not overhanging calcium shelves, nor are these meteors in buried or burned debris. This is shattered layer rock of thin calcium and these blue rocks in the bed of Martian surface soil. 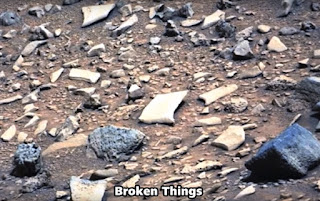 We have evidence of what appears sedimentary calcium and igneous coppers and a force which has shattered and scattered them, not from the subsurface but above the surface, with not place for them in geology to be there.

Then there is this photo which truly is interesting in 90 degree angles and a water erosion which has dissolved the interior of the block. But is it a new form of erosion on Mars, where it appears more of termites with sawdust. The interior being softer with the exterior a harder rock forming around it. 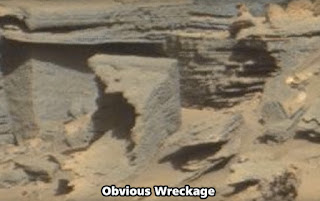 Then there are the realities of round and oval rocks placed in areas where they do not match the other objects of geological erosion or meteorite placement.
They are more of beyond the laws of averages. No meteor impacts, is the proof of erosion which exposed them. The problem then is why are the other stones not of the same shape due to the same forces, as polish is polish of wind, sand of water, no matter the base material of the stone. 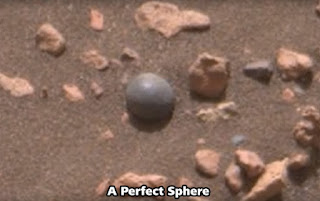 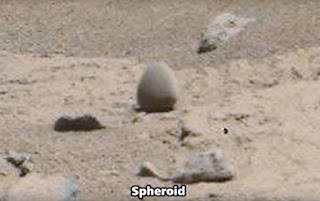 Lastly, there is the pyramid shape of angles in amongst the rocks of Mars. A like colored rock, but a non like shape in the chaos of Mars for here is pyramid order which defies the flat layers of sediment nor the rounded heat of pressure. Indeed there is not even the drip drip of stalactite. 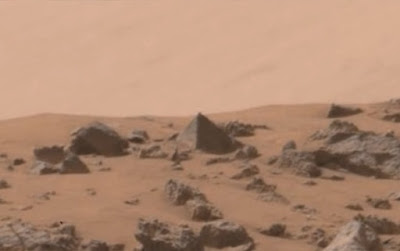 Mars has the comforting reality of a God formed world on Newtonian laws and then there are these unexplained divine natures so much centered that even the camera eye centers it.

How will the world's to come reveal these anomalies? Is it that the earth is the strange planet and Mars is as the universe is?