It was not Atomic Bombs which ended World War II, but Soviet Rape Cock 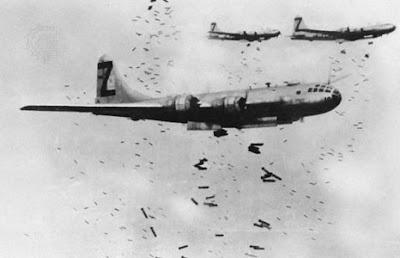 The shame of the fine historical account by John Keegan of World War II, is that not enough detail is invested in the nuances of the Pacific war, which England failed at miserably from start to finish.

My reasons by God for featuring warfare on this blog is to explore tactics, strategy and to find solutions to the failures of all in World War II. In this facet, I ask each of you to ask yourself if Franklin Roosevelt, burning Japanese people alive as Winston Churchill did in Germany by firestorm, because their bombing crews could not hit dispersed Japanese or German targets if that is something you are comfortable with.

The reason  for the question is, what do you think nuclear warfare is going to be like? Do you think the Eurasians and Muslims will spare  Jew City New York, because Americans are such lovely people or do you not want to face that one day the peoples of the west will get in spades what they embalmed Germans  and Japanese to the same fate?

General Curtis LeMay of Army Air Force took over Pacific bomber command, because his predecessor refused to slaughter civilians as it was unAmerican. By February 1945 though LeMay in charge of XXI Bomber wing of B 29 Super Fortresses, changed from bombing in daylight to night  raids as the British criminal General Arthur Harris  had unleashed in Europe on Germans, with carpet bombing of incendiary shells, filled with jellied petroleum to ignite fires better.
Japan was not Germany in brick buildings, but was a nation of rice paper shacks with wood frames. The American bombing produced firestorm after firestorm.

On March 9th, the XXI with 325 bombers raided Tokyo. The results were 267,000  buildings incinerated, 89,000 dead, 180,000 burn victims, all in one night. People focus on Hiroshima and Nagasaki, but the Americans slaughtered and maimed far more in Tokyo in one night than in the atomic cities.

By June, General LeMay for Franklin Roosevelt had incinerated five of the remaining population and industrial centers in Japan. Nagoya, Kobe, Osaka, Yokohama and Kawasaki had been obliterated. 260,000 people burned to death, 2 million buildings burned  to the ground and 13 million Japanese homeless and starving, all for the "unconditional surrender" of Franklin Roosevelt, who I still hear geezers like on the Pawn Shop show on television  lather up about  what a great leader FDR was. How would they have felt if Hitler had been leading greatly in burning down Chicago, New York, San  Francisco, Kansas City and Denver?

What the Americans accomplished was  one thing in this terror bombing, and that it proved to the Japanese their propaganda was right in the Americans were butchers and it steeled their will to fight on.
By July of 1945, 60% of the ground area of Japanese metropolitan areas had been obliterated and the Japanese fought on now with an even more suicidal frenzy against the United States Army, Navy and Marines having to contend with Japanese  fighting for their lives.
The Japanese were forced to fight on, because when their delegation in Switzerland made overtures of peace to future CIA Director Allen Dulles, they were met with absolute silence. There could have been peace in May of 1945 AD in the year of our Lord, but the Americans did not desire peace. That is left out of the historical accounts of the great Americans in Franklin Roosevelt and Harry Truman. There never would have had to have been an atomic attack upon Japan as peace would have been established, and in that the Japanese could have been martialed to wipe out the communist Mao as  much as the Wehrmacht with George Patton could have wiped out the Soviets, and thereby there never would have been Korean War, Vietnam War, nor the endless Jimmy Carter wars of the Mideast.

In all of this, the American air generals who refused to target civilians were proven correct, as was General Douglas MacArthur who stated that bombing would not break the Japanese will and it would require a land war to force the Japanese to capitulate.

For those who are under the delusions that Japan surrendered to the United States due to the incineration of Hiroshima and Nagasaki, there was another event in this period which terrified the Japanese more, and that was the date that the Soviet raping hordes saw their opportunity to mass rape Japan and loot Asia, as they had been allowed to accomplish against Germany with murderous rapine.
That is what made Japan surrender. The violation of Japanese men, women and children by the communist raping hordes. They knew the Americans would be civil in making examples of the Japanese leadership, but the Americans would not mass rape Japanese women.

At 11 pm Trans-Baikal time on August 8, 1945, Soviet foreign minister Molotov informed Japanese ambassador Satō that the Soviet Union had declared war on Japan, and that from August 9 the Soviet Government would consider itself to be at war with Japan.

Think on that revelation of the Lame Cherry and what it will mean to America and western peoples when this is unleashed again. The reason the Americans under General Andrew Jackson at New Orleans fought with a death wish, is they knew the raping and rampaging British red coats were in victory going to rape the women and children of New Orleans to death as they had in Spain.


It has always been the lie, the excuse for the use of atomic bombs in Japan that is saved American lives and ended the war. The fact is Roosevelt and Truman policy created more American dead and only steeled the Japanese will to fight. It was only when faced with a more murderous people than Americans in the Soviet rape hordes, did Japan surrender to save herself.