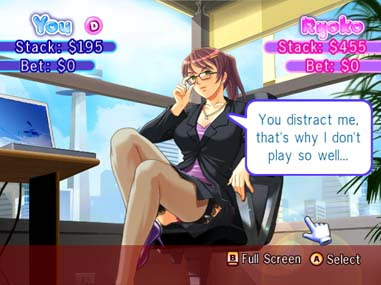 In review of the Hanoi Summit of  President Kim Jong Un of North Korea and President Donald Trump of the United States, the forensic psychological analysis of this from this blog's expertise is that Donald Trump was counseled on a two part political strategy, while keeping Sean Homo Hannity in tow for the sympathetic manipulation and diversion aimed at Trump voters to rally them behind the President. 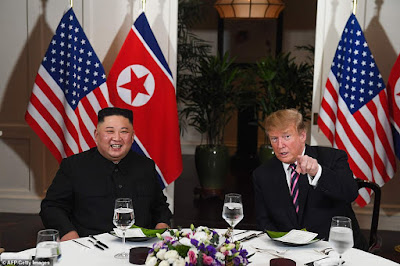 It appears that the CIA psychological experts with Mike Pompeo, had counseled the President to approach Kim Jong Un with the Pawn Shop Hard Sell, meaning Mr. Trump would smile and be best buddies, and attempt to force the North Koreans  into a situation of accepting US dictates in the nuclear situation.

In knowing that North Korea would not accept the Trump dictates, Pompeo and Mindfuct Inc. would then produce a narrative which had Donald Trump, walking in the successful shoes of President Ronald Reagan in Iceland, in walking away from nuclear elimination talks with Premier Mikhail Gorbachev of the Soviet Union.

Readers will be ignorant in this, but the Soviet Union laid a deliberate trap for Ronald Reagan in offering him elimination of all nuclear weapons, which was a bluff to have the United States eliminate Star Wars and defense spending. What took place in Hanoi Vietnam was not in the least in this Soviet trap. It was the Americans who laid the trap for the North Koreans, who were there to negotiate, and it was Donald Trump who rudely turned and walked away.

In psychology, Russians are not North Koreans and vice versa. What Donald Trump did to Kim Jong Un was a psychological molestation and violation. This was not about losing face by design, but by Kim Jong Un's reaction, it was an absolute puzzlement as to what the Americans had just engaged in. The North Koreans had in good faith offered reasonable  reductions  and as Japan expected reasonable return from Franklin Roosevelt to avoid World War II, the North Koreans expected a building of trust for the next step.
Donald Trump in this psychological assault, he was instructed to carry out by his Psyops experts, instead abandoned the negotiations, as the Americans never were there to negotiate a peaceful settlement. 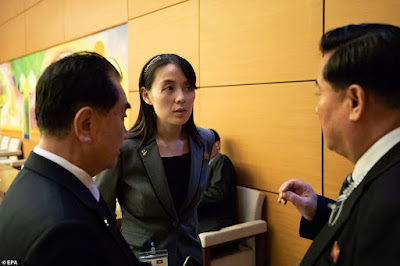 Kim Jong-un 'may have lost the will to negotiate' after he and President Trump failed to reach an agreement over the country's nuclear program in Hanoi, North Korea's vice foreign minister said in a new warning.
The dictator 'got the feeling that he didn't understand the way Americans calculate' after his offer to permanently dismantle his nuclear facilities in the Yongbyon region in return for partial sanctions relief was rejected, Choe Son-hui said after the summit abruptly collapsed on Thursday.
Her characterization of the talks directly contradicts Trump's account — he said talks collapsed after the North Koreans asked for total sanctions relief. He insisted his relationship with Kim remained friendly and talks would continue.
If North Korea does decide to break off negotiations permanently, it raises the prospect that nuclear and ballistic missile tests could resume. Trump says Kim promised him they wouldn't, but the conditions of that verbal pledge are unknown.


It is already calculated the North Korean reactions as it is expected when anyone is violated will react in certain ways.

There are miscalculations in this by the Americans, or more to the point, Mike Pompeo has traded off far too much for this ploy. What is being overlooked is Kim Jong Un, has been brought out of his confines. He has not been westernized as this blog stated was necessary, but instead has been in Singapore, Peking and all China in a train passage enhancing his prestige, and was the welcomed communist equal to the powerful nation of Vietnam.

Kim Jong Un in Asian minds is a nuclear power. He is on equal footing of the United States President. He is a man of peace and a player on the world stage. His sun is rising in the Asian sphere, and in a world of Asians and Occidentals, the bias is for Kim Jong Un in the Pacific. 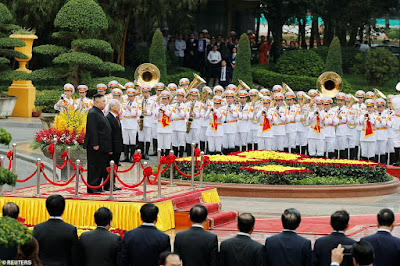 Donald Trump has enhanced Kim in complimenting him and stating the potential of North Korea. In what Donald Trump did in walking away, he legitimized North Korea's position as the peacemaker, the nation willing  to abide by United Nations sanctions and their being lifted, and on his status, he now has given Moscow and Peking to promote Pyongyang against the United States in the United Nations, and thereby ignore the sanctions the United States has dictated.

'We're working towards something, but we didn't sign anything today, it didn't quite work out,' he told Hannity on Thursday afternoon local time. 'Good relationship, but I decided this wasn't the right time to sign something so we'll see what happens over a period of time.'
The dictator demanded that all sanctions be lifted in return for giving up only some of his nukes, the U.S. president claimed.
'They wanted to de-nuke certain areas, and I wanted everything. And the sanctions are there and I didn't want to give up the sanctions unless we had a real program,' he told Hannity. 'And they're not ready for that and I understand that fully, I really do.'

Kim Jong Un can now play the bewilderment card at how untrustworthy the Americans are. It would behoove North Korea to progress this not in engaging in proactive actions as launching missiles, but instead allow the Chinese military to antagonize the United States, while North Korea plays the victim of the United States in a suffering people, as they step up nuclear production and deployment.
See it is a negotiating point now due to Trump Pompeo miscalculation, that the more nuclear warheads which Kim Jong Un possesses, the greater trump card he holds in this. A stockpile of a 1000 warheads is far more valuable than a stockpile of a few weapons, as 1000 warheads forces more concessions from the Americans than 50 warheads would. 1000 warheads produces immense pressure from Japan and South Korea on the United States. 1000 warheads provides for a Chinese beach head to Taiwan as the 1000 warheads augments both Peking and Moscow in their strategy against the Americans.

This is the miscalculation of Team Trump. The Soviet Union already had  thousands of nukes which it could not afford, as it could not compete with Star Wars. North Korea can afford more nukes as it will cost the United States more than she can bring to the table.

I allow you at this point to contemplate the correct description of the advice which Donald Trump received and engaged in, as he handed the deck in this to Kim Jong Un.

North Korea can now win this without aggression, but by simply building nuclear warheads, as the communist Chinese mine their rare earth minerals and sell them to Russia and the Europeans, with Japan soon to follow.

In this, Kim Jong Un should offer the following steps:


It is assessed from the above statements that Kim Jong Un will keep his word, but will now in regional affiliation build an axis against the Americans, and it is assessed that Donald Trump thought he was in 1980, but did not comprehend that North Koreans are not Russians as the paradigm was not in the same dimension.

Donald Trump has miscalculated or deliberately calculated confrontation on an on the edge war strategy where his policies think they can Balkanize the world, but his policies are uniting the world against the United States, which is no longer the financial, manufacturing and racial superpower it was in the 1950's or 1980's. Mr. Trump has misplayed Vladimir Putin as Russia is winning in military and energy. Mr. Trump has harmed the United States base production in the China trade war as China has endured it, as has OPEC against the American oil production, as has Russia. Donald Trump has created a disaster in Sebastian Kurz who is implementing a European Super State without the United States leading.

North Korea on it's own is a loss which America can absorb, but on the world stage which Mr. Trump is failing at, North Korea is a domino which will fall on the US strategic as a series of failures, rolling back the United States to Hawaii.

It no longer is an issue whether this is a US gambit under Mr. Trump or a US colossal failure, as consequences and outcomes are the results which the United States will have to deal with in eroding American security.

Donald Trump has squandered his Nobel Peace Prize. His voting base is eroding in this endless display of manipulative tactics as this President represents the Nazi Conglomerates in International Socialism of an ugly America hegemony. The world is moving past the wall of the United States and moving on to a world which will be able to ignore the ruins of the Americans politic.

The things Donald Trump has engaged in are not fixable without cost to the United States.The less costly will be humiliation and the more will be defeat in combat. 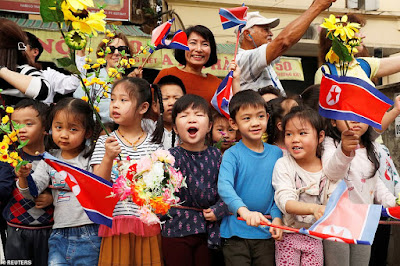