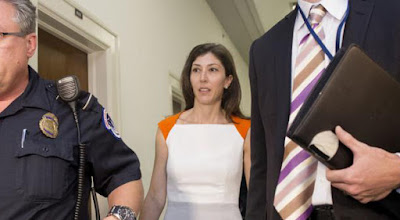 
This blog has defended Lisa Page through all of this, in the heinous attacks by those who kept calling her a paramour, and was proven correct in she did come clean before Congress, but what is bothersome is Lisa Page is a great deal like the Biblical Righteous Lot, who had no idea coming out of Sodom, what an absolutely reprobate he had degraded into.

For those not familiar with Lot, when the perverts of Sodom were attempting to break down his door to rape the Angels, he offered to throw his daughter's out to be raped by the mob.
When his daughters were concerned they had no man for children, they got Lot drunk twice and had sex with him, and fathered the modern Jordanians.

So when I read statements by Lisa Page that she could not be blackmailed, she was too political, but she did her job as she should have, I wonder at Lisa Page being the mirror image of Lot from the Bible in being absolutely unaware in how far out of bounds she has sunk.

After a recess, Democrat staffer gave Page a change to respond to allegations that “an affair can be blackmail risk, a national security risk.”

Strzok was the head of the FBI’s counter-intelligence division and Page, an FBI lawyer, worked directly for Deputy FBI Director Andrew McCabe
But Page denied that she or Strzok could have been blackmailed:
“I mean, it is untrue because we have always put our country first,” she said. “And so we are well-trained. We can recognize an approach. Any attempt at compromise would not have been successful,” she said.
“And, in fact, there was no such attempt at compromise?” the committee staffer asked.
“No,” Page responded.


By all realities of evidence Peter Strzok is guilty of an abuse of power. He betrayed the FBI by seducing a married woman who was the legal counsel of the FBI. In Lisa Page doing her job, we discovered that Peter Strzok was doing an end run around the FBI and representing John Brennan of the CIA in an illegal operation using the FBI as cover for a CIA operation, which was all based on fraudulent data against Donald Trump and has ruined the lives of Paul Manafort, Mike Flynn and is destroying Jerome Corsi and Roger Stone.

For Lisa Page to be doing her job, it is to protect and serve Americans, not to be part of a system which is terrorizing Americans in order to make them talk. Robert Mueller, the protector of America, even booted Peter Strzok off the investigation as Mueller knew it would taint his investigation.
The FBI has saw fit to remove Peter Strzok, and yet in this Lisa Page keeps referring to Peter Strzok as "we", a person of low character who betrayed the FBI, and betrayed and FBI colleague in having sex with her as America was supposed to be in the danger of Russian overthrow.
That is something Ms. Page has not comprehended as she claims she could never be blackmailed. She seems to think she is of the Mossad where they all fuck like gophers, but what would happen if Russia had approached Lisa Page's husband to blackmail him? What if Lisa Page was approached and she proved she was above blackmail and reported herself, but before she did, the KGB killed her, to protect themselves?

Lisa Page may have the will of a mule, but what happens when you have gotten your political nethers hot, gone down a road you think you can handle, and people better at this start threatening your child to get what they want.
What would  Lisa Page do in her job, when her triggers were actually pushed in something that really mattered. She can weep in testimony, and she has proven her husband and child are not of value to her, but what if the Mossad, KGB or MI6 really denied her of what mattered in her Sodom state where she thought she was still doing her job, but it is a fact she was not doing her job, as she was in political lust and getting off on power.

I hope the best for Lisa Page, but in her current state she is in forensic psychology stating like a drug addict that she had no problem and that she could handle things. Her situation has proven that others from Director Christopher Wray and Ass. Attorney General Rob Rosenstein, with the Inspector General whose interest is to protect the FBI from agents who are a threat, received Lisa Pages'  resignation and shoved Peter Strzok out the door.

That should be a warning thought to Lisa Page as she is not as Lisa Page as she thinks. She is a woman with lacking character  telling others she has the character to define what others are engaged in is criminal or not.
Her response was to cry and say her, and the cheater she was with had not been treated fair.

Tell that to Barron Trump who has to deal every day with the trash talk about his parents, put into other children's mouth, by the stories Lisa Page promoted in her investigation.