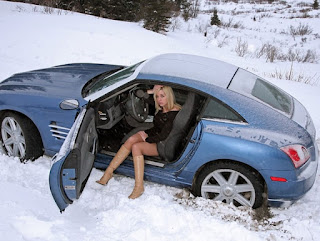 So that is what stuck in the snow means....


A few weeks ago the Cherry family may remember seeing some photos of the Brier Patch snow concrete. In the meantime, TL and I had gotten stuck in our driveway and I had to scoop the pick up out and a path to get home for the neighbor who helps with chores to blow snow.

While I had the pickup there, the kids of another neighbor decided to drive on our road which was plugged to pick up their kids as the grandparents watch them. Those assholes made me move the pick up, never offered to help and just drove on. Needless to say those Two by Two's were on my shit list as they are like all modern twats, shit for brains as they got it all.

Well this morning while doing chores, I noticed a pick up, a Chevy, 4 door, 3/4 ton, new, sitting in the road where the deep drifts are. I thought maybe the road crew was checking things, but then in watching the dufus, I figured he was stuck, even if he didn't look like he was stuck. The clue was he got out of the pickup and looked forlorn as if help was coming.

Well someone came and picked him up from the other direction, so I walked down to see what was up, and he had some church bulletin on the  dashboard, was a veteran, cell phone plugged in and the pick up was still running.....engine sounded like some dumb ass was hitting too many hard snow banks driving around with their new 4 x 4 pickup.

So TL and I ate breakfast and did things and I went out to check what the circus was up to, as I honestly wanted to call the Sheriff and report an abandoned vehicle, which would have lit things up and made things interesting for them, but I didn't want to make the Deputy drive 50 miles out here for that bullshit.

This is the gay parade I found. 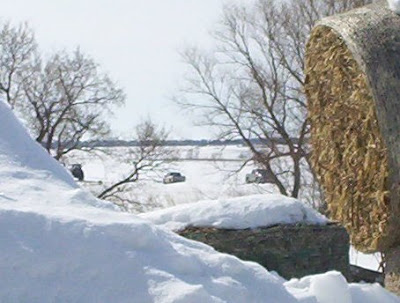 Being a Trapper and reading sign, I knew what had happened in the above as 4 wheel drive tractor had appeared, along with the original rescue 4 x 4. I hope you notice how nicely framed the above is, with corn stalk bales and trees with pile of snow. I did not want to really piss them off in taking pictures out in the open and rubbing in what had just happened.


So this all started about 9 o'clock when dimwit though he could drive down our road. See everyone thinks they are screwing me over by not opening up this road, but in the end it is them, as they simply will not stay off what is mine. See there is a cleared road a mile over, but NO, the geniuses will not stay off of this one, and today the Chevy driver, drove on top of 2 and 3 foot high snow drifts and simply broke through and sank in.

Rescue came about 10:30 and as the morons apparently did not have shovel, chain or tow rope to snap the Chevy out, they went to get one, which took another hour, and up arriving, backed into the deep banks and promptly hung up the rescue 4 x 4 too, which they could not dig out, with their hands, as they are not intelligent enough to have a shovel. 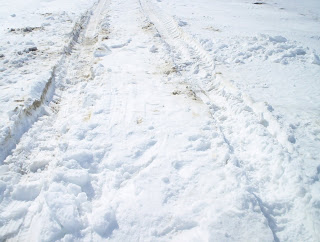 This is where the original dimwit was bottomed out, and I am going to explain something. You CAN NOT GET STUCK WITH A FOUR WHEEL DRIVE VEHICLE. It is impossible. All you can do is get hung up on the snow by the frame, and your wheels just spin then.
I know about this as being adventurous a few times, I got my dad's Ford 4 x 4 hung up in this shit snow, and I learned my lesson. How you get out is break the snow, shovel the frame out, the tires out and then you start rocking the hell out of it.
Ford's are built for that or were. I can not speak to Dodge Rams, but the stuff I put my Jimmy through makes me believe they can  take some hammering too without sounding like shit or breaking. As I am still waiting for the generous donations from the rich, I will tell you how a new pick up in 4 x 4 holds up in my testing when we get one.

As for Chevy pickups and this is a WARNING,  do not ever buy one. I have been watching our mailman blade snow with his, and I do mean blade, as those damn things are so low they are like a car. They are worthless as shit.
Furthermore if you look at the Chevies hung up, they are on the frame, and both of them left gas tank marks in the drifts where those pickups were hung up on the frame like snow shoes by that gas tank. That kind of shit is worthless in the real world and you are asking for trouble with a Chevy pick up in the newer models of the last 5 years. 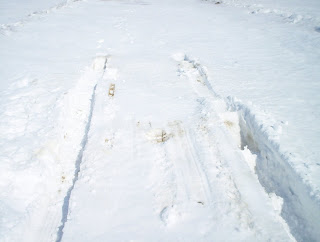 So in review of my story, two assholes left TL and I in the snow, never bothered to offer help, like the Samaritan story, just like the rich donors pass on by here, expecting others to do the job as they are not going to stoop to things like helping an orphan girl.

God watches, and in return, I not only had a reckoning on my enemies, of they got stuck in the snow, their pickup sounded funky, their rescue got stuck, and then they had to call a farmer to rescue them. That was 3 hours of their rich lives shot in the ass, and I am still praising God for that, as the same things are waiting for the people not donating here. God is going to avenge me and keep avenging me.

See this has just started, as they have refused to clean off my road. In knowing things, I know this snow is going to melt in the next week, turn the roads into the Russian Rasputitsa, and then all of these rich people with their big pickups and big farm equipment will be gay parading down the roads at high speeds, and flip themselves into the hospital or morgue. Then the county will get into trouble and then all that money they thought they saved in sticking it to me, is going to be spent 20 times more in fixing the roads.....and the cherry on top is I do not drive on that road in that direction most times I go out, so as before when this road bottomed out from big machinery, it will be destroyed again.
And this all comes from these big rich farmers, going clean field to keep snow off of them, which then blows on my road and into our place in high banks, so they can get into the fields quickly in the spring.....and I will have the last laugh as they will be paying for their chewed up roads and end up in hell for screwing me over........just like the rich people not donating here as they should be generously.

Yes let's not drive around on the open road, but drive on that Cherry road as it makes us feel superior, but in the end it wastes 3 hours of their lives, tears up their new vehicles and the mud is coming in a week. This has just started and I will enjoy the coming retributions from God as no one gets by with screwing me over. 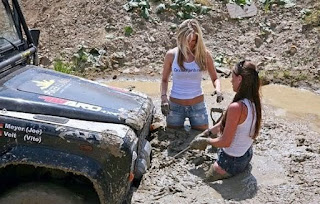 Do you think we should have bladed  the roads last winter.