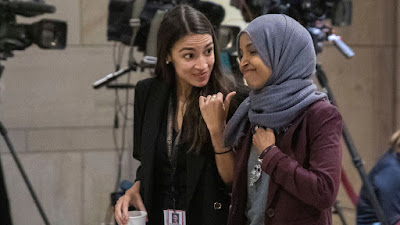 Did you hear that Nigger representin' for his bank account!!!


I find it interesting that it took Alexandria Ocasio Cortez to flush out the fraud of the image of Barack Hussein Obama, for the fact that Obama was nothing but Wall Street rapine his entire 8 years of stolen elections, and was nothing but turning America over to 7 Nazi Conglomerates to manage Americans in what they could and could not afford.

You name any person on the right who is in the national spotlight who accomplished what AOC did as none had the balls to do it. Sure AOC did not set out to do this, but as leader of American Marxism, in her international New Green Deals, she has exposed a reality that liberals in Obama form when push comes to shove, protect the feudal few and the poor, along with the Climate Change killing the planet can go to hell and rot in the streets, because that is what Obama's image is lecturing about "costs of liberal policies".

There is not any money left in regular American's pockets, so AOC's programs are going to suck the trillions out of the Soros Singer financiers who stole it all for the 1% deliberately and put it all in these damned Trust Funds where it is forever out of the reach of regular people. It is the rich protecting their riches. 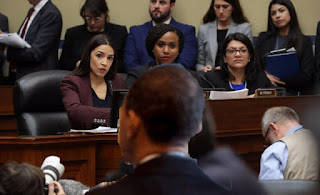 Comradettes I worked hard to steal trillions from regular Americans,
so don't do anything to save the planet in giving it back to the poor!!!


It is absolutely delicious in this monster which Webster Griffin Tarpley said was being created to split the democratic party, now has Nancy Pelosi washing her hands of it in the Pontius Pilate season and bringing in Comrade Obama to try and hose down the hot nethers of these tan skinned women who are just too hot for saving the planet and taking trillions from the rich and giving it back to working people.

The Washington Post reports that Obama sat down with legislators, including Ocasio-Cortez, to explain that high-price tag policies would hurt legislative success rates overall, and cautioned freshmen lawmakers to think "boldly" but logically about plans like the Green New Deal (though he didn't name any specific policies).
"He encouraged the lawmakers — about half-dozen of whom worked in his own administration — to continue to pursue 'bold' ideas as they shaped legislation during their first year in the House," the Post said, but encouraged "members to look at price tags."
“He said we shouldn’t be afraid of big, bold ideas — but also need to think in the nitty-gritty about how those big, bold ideas will work and how you pay for them,” one meeting attendee told the Post. 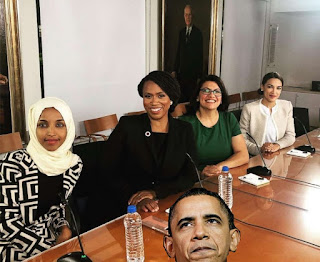 You sistah's got to be more like Michelle and just talk about
saving the world and ending racism, instead of doing something about it.

Yes that is the Obama message. The "smart" legislation, was telling these dumb cunts to stop trying to get into the cartel vaults to liberate money for the poor. These women are supposed to be like Obama and Obama, going on perpetual vacations, talking the game, and when it is over, looting millions for themselves and creating little trolls in their image to protect their Animal Farm.

That is what is hilarious in this, Obama had George Soros fund a live fire political exercise, which these women in protests rose to the top in power, and have moved to implement all the bullshit Marx had written for him by the Jewish cartel to overthrow free nations, and then return the wealth to the poor for the good of the village to raise that one child as Hillary Clinton chirped about, but it was all TALK. The Obama Pelosi problem is now that these women are implementing the Change and Hope Obama told them to believe in. 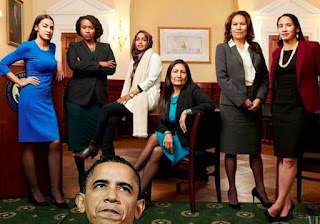 Sistah's it's not Medicare for all....it's rationed death for all!!


I am not supporting what AOC has been employed to do, as the good measures of utopia, always have a feudal few who will never give up power. What I do support is the first casualty is the corpse of Obama's Legacy. Just remember AOC exposed this fraud of Obama by actually moving on what Soros and Obama have been promising was their agenda.
Again, AOC's actions have shown that when push comes to shove, image Obama comes out for the banksters, not for the poor and when the rhetoric appears, it is not this time Sarah Palin, lipstick on the pig, but Obama saying what a dumb cunt Alexandria Ocasio Cortez is......for believing him. 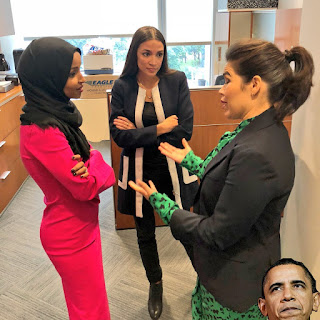 See Obama says we have a place.....behind  him.


Alexandria Ocasio Cortez was  in the lead polluted waters of Flint Michigan, she was freezing her ass off in North Dakota. She earned her stolen House seat in New York, while Obama stood around Nigger grinning not doing a thing for Blacks in Chicago for his community organizing as Muslims bought his seats for him.

Now that these women believed Obama, have moved to promote Islamocommunism in America, who appears but Birther Hussein's shadow, telling these women that they can't be leaders, but must step back and be like Nancy Pelosi and Hillary Clinton in filling their own pockets with the same lucre that Michelle Obama sold out for long ago.

For this, you have to love the CIA asset which Alexandria Ocasio Cortez is. She has done more with a few women than Sean Homo Hannity and that entire fraud Mockingbird caste ever did with their millions the intelligence state has paid them to manipulate you.

"Recalling the ‘caging of kids’ at the U.S.-Mexico border and the ‘droning of countries around the world’ on Obama’s watch," "[Obama] operated within the same fundamentally broken framework as his Republican successor," Omar reportedly told the Washington, D.C. outlet.


Let's all give a Viva la kosher Allie Cortez. It's time for her to make the Obama party the Ocasio Cortez party, as Trump is gathering in the Negroids, and the Latins are the base for the Jesuit communists in the United States of America.

AOC Able To Leap Fraud Obamas In A Single Bound