Weapons are designed to Kill things 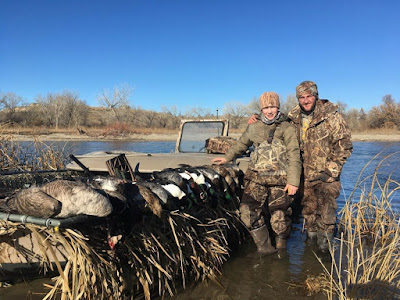 
I wanted to share a story which I found concerning gun shot wounds. Everyone has been conditioned to think that everything is sterile and clean like in movies, but in reality most people do not die or go down from one shot put into their bodies. None of you comprehend that there is not just blood spray, but depending on the location there is gut spray in the area too.

The following was a morning duck hunt in Oregon, in which a kid lost his balance when shooting, fell backwards, his friend reached out to help, the gun went off and  blew a hell of a hole through the guys upper shoulder.

“I was kind of twisted and off balanced, so I fell backward,” James recalls. “We were laughing, and he went to grab my gun first, and then he was going to help me up, and when he grabbed it that’s when it discharged and hit him in the shoulder. It was still in my hand – I was still holding it.”
At first, James said, he didn’t think he’d hit Shipman.
“I thought I’d shot off to the side more. But he was like, ‘Oh man, I think you’ve shot me.’ And I was like, ‘Are you serious?’”
It was true. The misfire from James’s 12GA Beretta had taken a massive chunk out of Shipman’s shoulder, and with help a six-mile boat ride away, their situation wasn’t looking good.

This is what a shotgun blast looks like at point blank range, after it has been cleaned, operated  on, and still  draining, months later. No one thinks about these things, and it is why GUNS ARE ALWAYS LOADED and you never clown around or ever point them in a direction where you do not want them to go off.

This guy was fortunate in no arteries or bones were hit or he would have probably bled out and certainly lost his shoulder. 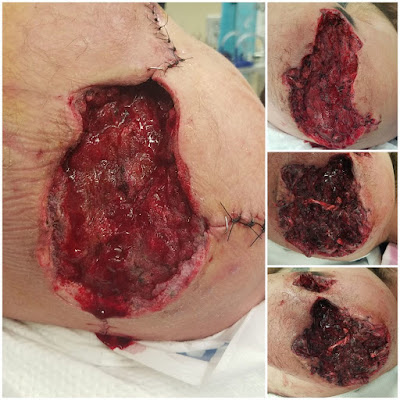 Any kind of shotgun will do this damage in hole size at close range which is what home defensive shooting situations are. A hollow point or fragmentation bullet if it "grazes" tissue or bone will produce like wounds, especially if it is a high powered  rifle of a deer hunting caliber. This is why civilized nations banned expansive bullets in war, as this is the kind of damage which would be inflicted.

This is why the US Marines, trench warfare, police and homeowners arm themselves with shotguns as place this kind of damage onto a human torso and it ends the fight. This was accomplished with bird shot at point blank range, but utilized slugs or buckshot will produce like effects.

There are rules which I always set for myself and others. They begin with the safety is  always on. I am chronic about flicking and checking safeties, and while it may not be protocol, it is what I do as a I am paranoid about guns never going off.
I know the law  enforcement protocols are guns are always chambered with a round, but that is why all these cops are accidental discharges.

I always keep my finger off the trigger. Your finger is there to guard the trigger 99% of the time from being hooked by a weed,  clothing or something else in an accidental discharge. The finger only goes on a trigger to fire the weapon.

I am placing the wound above for shock to those who have never considered such things, to assure them their firearms will do a great deal of damage to criminals if the need arises and to warn them that you do not want a gun going off in your leg, some innocent person or a pet.

I have a real dumb fuck brother in law. Mouthy and an asshole who I have nothing to do with. One day we were out bird hunting, and he laid down his gun as we took a break.
I ALWAYS have the safety on, and as I only shoot pump shotguns, I immediately with the cut off that shotguns have on triggers when the action is open, jack the action open half way. I point the gun in a safe direction and that keeps things from getting shot by accident, but I am still phobic about it.

So dumb fuck goes over and picks up his gun, and sure as hell he has a shell in the chamber, sure as hell he left the safety off and  sure as hell he pulled on the gun and a goddamn weed hooked the trigger and it went off.
First, I was not in front of that barrel by design as I trust no one which kept me safe.
Second, the dog of his was six foot off to the side and almost got shot, but did not, which was good.
Lastly, it was unfortunate the asshole did not kill himself right there as he has been nothing but a problem for everyone since.

I did not say a word, but I was never going to be around that fuckhead  every again with a gun. I had warning signs of his head up the ass, in one time he was bitching at me about losing a live round in a bolt action rifle he borrowed from my brother, after he had shot a deer.
No big deal about a lost shell, but he acted like I had lost his testicles. He whined about it in the pick up. Stuck his finger in the chamber and I told him, I did not know what happened to the round as I only carried the gun and never touched the action.
I was getting really pissed after five minutes of this in being blamed for something, when my brother reached over as he was driving, closed the bolt, jacked it open and out popped the missing live round.

There was complete silence in the pickup as dumb fuck was made a fool of, and this asshole showed what a hazard he is.

I will tell another tale on dumb fuck and it is a warning if you have someone around who is just sending off  signals you never let them near you with a gun.

So dumb fuck weasels his way into a Colorado elk hunt with one of his co workers. Packs up all the shit in a trailer and  off they go to a public hunting ground. Dumb fuck returns, having shot an elk calf. My brother who is bwana of elk hunting as he loves it, gets this puzzled look on his face  and says to me later, "Why in the hell didn't he shoot a cow, as if there are calves around, you know  there are cows?"
Yes puzzling question, but the one which puzzled me most was the hunt broke up early after dumb fuck shot his calf. See there were three regular guys in camp and dumb fuck. One of the guys I heard got really moody and he called the hunt off as he was pissed at dumb fuck.
I do not know what the hell dumb fuck did. He has a smart mouth, but that is not the whole story. I know he bought a new Coleman stove, did not try it out, and then it would not work in camp, so all of  his special Tupperware meals had to be heated by someone else's stove.....
Whatever it was in maybe he pointed his gun  at someone and they didn't say anything or who knows maybe the guy was on the other side of the elk herd when dumb fuck opened up. Whatever it was, I know that dumb fuck and  his kid never went back to that place and were both trying to win hunts at the Rocky Mountain Elk Foundation......again makes no sense as if you know where the elk are and it is public land, you go.
So I surmised the moody guy probably told dumb fuck if he ever showed up in Colorado again he would shoot the  bastard and enjoy the gaping wound.

The rule is to remember gun shot wounds as there is no taking back a pulled trigger. Always be safe and only be around people you trust with a gun. Guns are designed to kill things. They are nothing to be feared, but always respected.  They also have instances like Oregon where a mistake happens and changes lives.