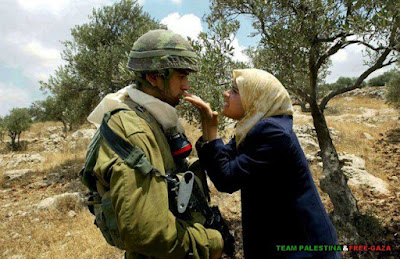 I came across this post on the Daily Wire, advocated by Josh Hammer, which basically states that Benjamin Netanyahu needs to clean up the Palestinian Problem in Gaza by slaughtering all the Hamas leaders there and followers, which of course would lead to piles of dead Jews in the IDF.


It is long past time for the Israeli government to commence a full-on, comprehensive land/air invasion to hunt down and permanently root out every last one of the Hamas leadership there. Israel surely has no interest in formally re-annexing Gaza — calamitous as Sharon's withdrawal was, the Israeli government could not be any less interested in now re-absorbing the radicalized Arab populace there. And while the Israel Defense Forces would no doubt suffer high and tragic casualties as a result of a prolonged land invasion, one is forced to consider the tradeoff of inaction — the continuance of the status quo. And that status quo is truly terrible for all parties involved.
Yes, the world would howl and shriek. The Jew-hating ignoramuses of the "international community" — best embodied by that wretched hive of Western values-hating scum and anti-Semitic villainy known as the United Nations — would cry out in agony against Israel's "militarism."
Whatever. Let them do it. Because there is no chance that, if Netanyahu and the Israeli government forcefully made the case of the necessity for such a comprehensive invasion to Trump, that Trump would not abide and enthusiastically support it. Of course he would do so. Secretary of State Mike Pompeo and National Security Advisor John Bolton are two of the most emphatically pro-Israel leaders to ever serve in a high position of power within the Executive Branch of the federal government. And Trump himself has proven himself to be, by any measure, the most stridently pro-Israel President of the United States since the founding of the modern Jewish state in 1948.
The time is now for the Israeli government to take such a move. Israel ought not to wait until we get closer to 2020, when a radical Israel-hating Democrat could ascend to the White House. This simply must be commenced with Trump as president. The time is now.
This madness has truly gone on way too long. It is time for Netanyahu and the Israeli government to heed Einstein's advice. Stop this insanity. Stop the self-perpetuating cycle of the unsustainable status quo. Keep calm, muster courage, and go in guns fully blazing to send Hamas straight to Hell.


OK this is a photo of the all female Hamas Police Force. 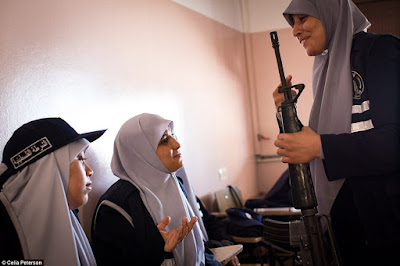 Sending people to hell sounds easy behind a keyboard as a commando, but this would be urban warfare, which is the deadliest on the planet as it is room to room.

Never mind about the dead Philistines and dead Jews though, as the interesting part is ....well let's look at what a dead Jew will look like in thousands of them. 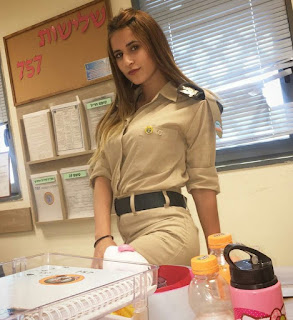 Still appetizing when it comes down to women being in bits and parts and strewn all over Gaza?

Ok stop being concerned about pretty dead women as this is Zayed City in Gaza. 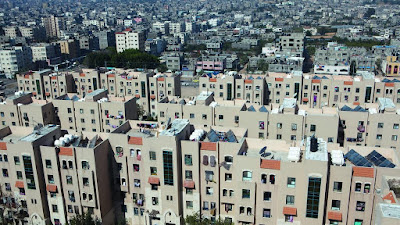 From a tactical standpoint, this is solid concrete above ground bunkers, several stories high. Each one is perfect for ambush and each window represents on dead IDF soldier and five dead Philistines This is what Gaza will have to look like in Biblical Prophecy for the Jews to obtain a "victory". 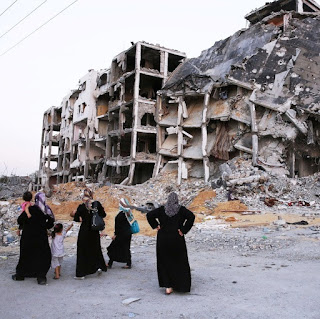 For a Lame Cherry reality check in this, AMAN which is IDF intelligence and Mossad, have every person catalogued in this area. They have informants, they have electronic devices built in and the whole place is under surveillance. The Jews know who the problems are and where they are. They have been keeping the Palestinians around as they are good for business, business meaning American revenues flowing in.

The fact is there is more Muslim money, which the Jewish bankers are in control of, and the only reason Gaza will be cleaned out, is if someone else is in the process of taking over Jewland, as in Sebastian Kurz, as Jared Kushner in his ghetto diplomacy has not achieved a thing for Donald Trump.

As John Keegan noted in his history of World War II, Adolf Hitler understood that cities were citadels. Most cities defeated the Americans and British. Berlin defeated the Russians and Stalingrad defeated the Germans. Cities of concrete are structures which eat armies up. The only way of achieving victory cleanly is by neutron bombs eradicating the populations, as electronic warfare can make people sick and kill them, but it is not widespread effective for any operations as  the enemy is firing back at all targets.
Siege warfare is not built for modern instant television and cell phones. Assyrians could starve Jews out to eating their babies, but that is not the reality of a modern war.

The problem is then what does one do with the survivors as no one wants these culls in any Muslim lands as Muslims breed like rats, and Europe is through importing rats, and unless the United States wants 500 more Muslims elected to Congress in the refugees settling in Omaha, the reality is that the Daily Caller clarion call to slaughter all of HAMAS........which last time one checked, all Philistines look the same, and do not have HAMAS stars on them as Hitler did the Jews, so it would be a matter of killing them all, men, women and children.
That appears to be the solution in this, as the DC states that Mike Pompeo and John Bolton will rubber stamp the Jewish genocide of the Philistines. That should look well on the resume of Christians who voted for Donald Trump and his Jewish tomahawk firing family members who were killing Syrian kids in 2019 AD in the year of our Lord.

As the Russians and Germans learned, as the American learned in Italy. Blow up the buildings, and they become bunkers for the enemy to slaughter you in numbers from. Blow up Gaza and the rat holes become bunkers to slaughter Jews from.
I would have bought them all out, and sent them to Sinai to make a community of farmers there, but this has now graduated to the Warsaw of the Philistine. This should once and for all end the Jewish trump card though on the enhanced Holocaust of 1945 of their propaganda, as obliterating a city state with almost 2 million dead Philistines in living color, will trump the old Jew cadavers starved to death by British and American carpet bombing of German cities.

I guess the Jewish press, trumpeted by the White House can read:


IDF MERCIFULLY SLAUGHTERS ALL PHILISTINES IN GAZA
ALL WOULD HAVE DIED FROM GLOBAL WARMING IN RISING SEAS ANYWAY.

For those who require a history lesson, it was "What would Jesus do" George W. Bush who decided to democratize the Philistines by having them vote for a government. They did, and voted in HAMAS which displeased the Americans, as the Philistines voted for the terrorists protecting them, instead of the American flunkies who were keeping them in the gulag.
Now of course the solution is to kill all of Hamas, which when new elections come, only the Jews will be able to vote for Mossad candidates who are Jewish as that will represent the bits and pieces of bones which were the people of Gaza.