The Right of the State in Federal Elections over the Mob


The new Colorado law which negates the votes of the Colorado voters by ignoring their votes for President  by disenfranchisement and allotting the Colorado Electoral College votes instead to which ever candidate "wins" the most votes nationally, is a reality that Colorado no longer needs to participate in the national election and simply will award it's votes to whichever liberal gains the national vote.
Some would argue that Colorado should still vote, but the reality is Hillary Clinton won the state by 136,000 votes, so that neutralized 2.4 million Republican and Democrat voters in offsetting voting, which brought nothing to the national total as 136,000 votes are meaningless in California and New York's corrupt voting system.
So in that reality, Colorado simply has no reason to vote in 2020 AD in the year of our Lord, as the Governor and Legislature have agreed to make Colorado voters of no consequence.

What America has is an outrage against the system of checks and balances, where the Founders instituted a method of checking the fever of election day, by giving the public time to settle down, whereby representatives they elected from each state would then vote as the people of that state desired for a Presidential candidate.
In this system, a small state like Rhode Island originally had an equalizing power with other smaller states, compared to the concentrated voting power of a New York or a Virginia.

In the modern era, Donald Trump was elected President by the  majority of states, and not the majority of population which Hillary Clinton was. In that this is an issue where 50 sovereign nations are the check to 1 national vote, in not dictating to the combined Republic in protecting each state's vote.


The eleven other states that have signed on -- California, Connecticut, Hawaii, Illinois, Maryland, Massachusetts, New Jersey, New York, Rhode Island, Vermont and Washington state -- as well as the District of Columbia and now Colorado, make up the National Popular Vote Interstate Compact. New Mexico, which has five electoral votes, sent a bill to the governor's desk to elect the president by popular vote and may soon join the group as well.

The Founders deliberately built the federal election for President on a system whereby a national mob or democracy could not dictate by population their will over each individual state. It is the balance of the 10th Amendment in all rights reserved to the people over the allocated rights to the federal. In the Trump election, the smaller states combined in their rural populations of less density than California, New York, Virginia etc.. to elect a President by the States and not by the mob.
In 2016, Wyoming's voice was heard, as the majority of states voices in rural areas in the greater land mass of the United States, instead of being crushed under the mob vote of liberal and fresh off the boat 'Americans'.
In this, the Americans who have built America for generations, had their voice not extinguished by the idle liberal rich and their wetback slaves, taking what was built by the sweat and blood of over 200 years of the American nation.

It simply is unConstitutional what these states are engaged in, in attempting to negate the Electoral College in disenfranchisement of their voters, and the voters of States who are abiding by the Constitutional rules which the Founders established.


This is outlaw. This is John Brown's criminal raid. This is the firing on Fort Sumpter. This is Lincoln's total war on the South. The Electoral College in each state can be apportioned to that State's vote, but it can not be awarded on a basis to what a group of other states are engaged in.
Put it this way, if Colorado is allowed to engage in this illegal activity, then it is equally legal for California and New York, once they become Republican to allotting their Electoral College votes, based upon the number of counties or land mass the Presidential candidate wins. To explain this, the Republicans could state that as Republicans win more precincts or counties, that is how the Electoral College should be apportioned. More counties in New York, Colorado, California etc.. vote Conservative, so those former red states would become Reagan Blue States again.

The corrupt Supreme Court of John Roberts should have ruled against these liberal states, but that is not the case. In this case, the President should then be placed in office by the land mass he wins in the national election. This has precedent as Americans once had to be landowners in order to vote in elections.

Instead of whining about it as the frauds in right wing media do, the Lame Cherry once again provides the solution which the GOP should be engaged in, along with Conservatives to ensure the Founders will prevails, and those states who do not abide by the Electoral College, should not have their votes counted at all, as they are illegal. It should then fall without those votes, the land mass or states won. 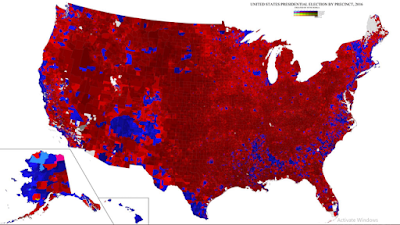 Trump has done absolutely nothing concerning vote fraud, nor has the GOP Congress, nor has the corrupt John Roberts court.