The Death of HAARP

I am typing this on Tuesday afternoon for the first available publication date of Thursday to inform all that Arctic HAARP is dead. The above jet stream time lapse future reveals that the HAARP facility can no longer generate enough atmospheric flip to overcome the normal solar warming of earth as the season shifts to spring.

I will point out in this that a month ago the meteoroglists predicted this would be the sequence, including a record cold first week in March. Do not though think by my two day delay that I am behind the curve in missing all of this, because what is coming in the death throws of HAARP is going to make most of you reading this think you are in hell on earth.


Last week I noted that out of the blue an Arctic surge jet was produced to make things cold again in Bones Watertown South Dakota where all of this generates on the American hub affecting the East Coast of the United States.
I told my neighbor what to expect on a cold day as we were feeding cattle, in stating, "You know it is supposed to be 20 below here on Sunday, but by Monday it is going to warm up to 15 above, BUT THE ARCTIC JET HITS SOON AFTER THAT AND IT STAYS WARM.
He stated the obvious in that was not right and could not be......and yet that is what happened as the Montana air flow smashed east and south with a 20 below drop in temperatures, and when the Arctic stream took over, it warmed up to zero for lows and 20 degree for highs. Yes the sun is overcoming HAARP and the air at the North Pole is warmer than Montana aloft. That is HAARP. 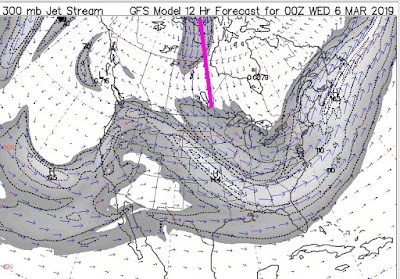 I noticed something though in the jet out of the Arctic that it hit the US border with Canada and sort of right angled, and then it pushed back into the western Dakotas as it overcame the Pacifc Jet. If you study the photographs below, you will notice that the Arctic jet in the week of March 7, is overcome by the Pacific Jet. That is what HAARP Winter looks like in being killed by the sun. 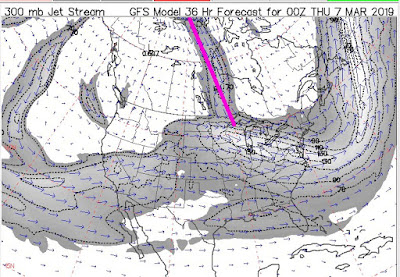 Before you celebrate though, there has been something whispering to me as everything has gone worst case in the Weather Genocide aimed at Christian America, and that is I suspected with all that damn energy HAARP had pushed south, that it would not require a great deal of effort to create the super storms of super storms, and that is what is coming to the United States are back to back cyclones, and the HAARP feeds I watch are predicing over a foot of snow in dumps, with high winds in both scenarios beginning Saturday in the Central Great Plains and reappearing on Wednesday the following week. 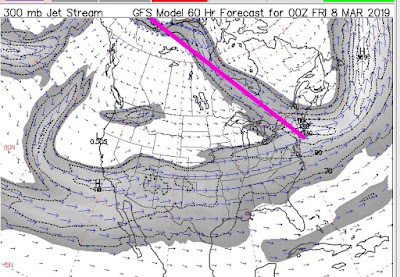 In the below graph is shows  the system which is puzzling as only the High Pressure dome first appears over western Oklahoma, and then the next day this Lo Pressure appears not in Colorado where it should, but in Wyoming.

You can see the Lo has 63 mph winds or hurricane force winds, while the High pressure aloft has 130 mph winds. That is why HAARP is dying in the north as the energy being generated by the sun is too much for the Weather Mods. 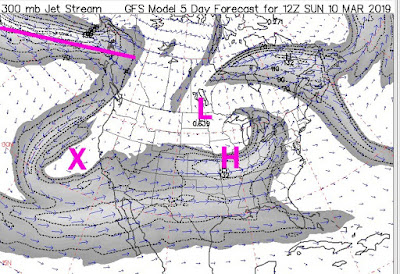 They are though going to produce over this region from Wyoming to Wisconsin around 5 to 6 feet of snow pack which is going to wild the hell out of the Missouri and Mississippi Rivers which will carry this to mid summer in the south. This is a disaster which is generating and if you look at the Alaska jet, you see it is coming out of the Pacific now too, so it appears everything is going to warm up quickly.
That X off California is the second super cyclone which will appear....notice there is not a Lo Pressure there, but HAARP is displacing the jet as it is generating the future storm to smash across the United States.

There is absolutely not any reason to generate storms and cold like this other than to force people to pay money for energy and to genocide them. None of this could have happened without it being manmade from HAARP. This is not for national defense nor for dealing with atomic fallout. This is Weather Modification by the elite against the cloth of the land.


This is another Lame Cherry exclusive in matter anti matter and what was building as an epic disaster in America due to Weather Mod has just now gone two steps beyond this with these super storms. There simply is not any room for any more snow. Things are dying in these regions in record numbers, including people, and the parting shot in this is supposed to be two super cyclones which will pound the entirety of America again, as that disgusting Monsoon generated out of Texas keeps sweeping away life to the Northeast.
Texas has been 75 degrees and plunging to the 30's. That is not a normal pattern  and it is part of this HAARP generated Weather Mod, as you can not have Montana 20 below zero and not have it spill into Texas and all points east.

HAARP is being killed by the sun, but in the death throws the destruction is just beginning. I wonder why no one is covering this in Mockingbird, as the Saudi's own all the oil in the United States and are selling it back to the American People.