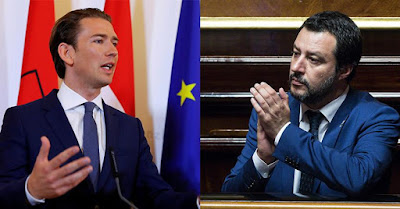 The echos of the grande ministrations of Benito Mussolini and Adolf Hitler are filling the chambers of the European Parliament with the sounds of an orchestra of change.

The socialist Sebastian Kurz first appeared on the scene to rescue Europe from her Merkel, Macron and May demise in becoming leader of Austria. In his year of power, Chancellor Kurz cemented the outward projection of Habsburg Europe, in a world void of America, by creating an African consumer trade, an Oriental technology partner and a Slavic work force, with the backdoor of the Balkans secured against Russian or American threat.
In this time, Sebastian Kurz put the collective nemesis of May, Merkel and Macron on the leash of Vienna and Berlin, freeing Europe from the Muslim genocide unleashed upon those peoples by the globalists.

Sebastian Kurz has made definitive annexation of the Jews and the Holy Land. Thus securing for his Emperor, the Habsburg King a throne in Jerusalem with the Vatican's full support. A private and a public military are spoken of to project this super state's power, and with this completed, the next phase of this is coming in mid 2019 AD in the year of our Lord, with the ascension of the  Holy Roman Empire as the Italians join in this union of European Parliament to gain the leading majority with other Nationalists to have the full political power to provide the breathing fire, talon and fang of this once dead beast now arisen.


According to the polling, which was cited by the FT, Salvini's League Party is expected to make some of the most striking gains in the May vote, possibly becoming the second-largest party in the assembly after Germany's center right Christian Democratic Union.

Kurz has been involved in providing construction funds to Jerusalem for hospitals. The next phase would logically be for the Holy Kurz Empire to rebuild the 3rd Temple spoken of by Ezekiel the Prophet. There must be a throne and footstool of the 21st century lionhearted leaders of Europe and Jerusalem will be the international capital from which this pax imperium to rule the world.

As Salvini's star rises, the pro-EU center-left and center-right forces that have traditionally dominated the chamber are struggling against a turning tide of public opinion. Turnout for the vote has been slowly declining, and fell to 42.6% in 2014. This has given anti-establishment leaders including Salvini and Hungary’s Viktor Orban an opening to win more of the vote at a time when popular sentiment has decidedly turned against internationalist pro-EU politicians like France's Emmanuel Macron.

In addition to Salvini’s League, the Eurosceptic faction in the EUP includes Poland’s Law and Justice party, Italy’s Five Star Movement and France’s Rassemblement National. Law and Justice and France's RN have pledged to join forces in the coming parliament. Other Eurosceptic parties including Spain’s far-right Vox and the Dutch Forum for Democracy are expected to win seats in the chamber for the first time.


Yesterday Vienna, Africa and Asia. Tomorrow the European parliament, and after that all the world will touch  the Habsburg scepter from Jerusalem in the Temple restored in this most Holy Kurz Empire time. 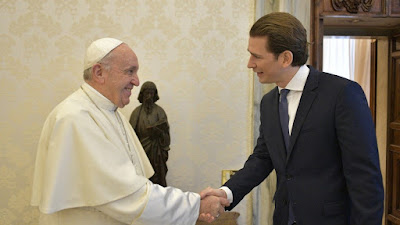