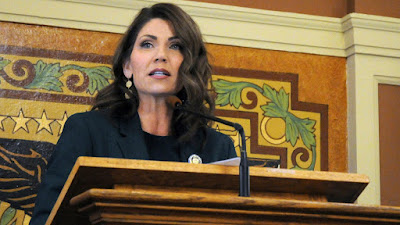 Without any intention of getting Governor Kristi Noem of South Dakota into any trouble, I wanted to feature her Republican leadership, along with the Republican led Congress of that state to show you the stark difference between the fraud of Donald John Trump and Mitch Chao McConnell.

Some may remember that the first thing the Governor of South Dakota did was sign the Constitutional Carry Law in South Dakota. That means every Citizen can upon purchase of a handgun in passing the BATFE background check, can slip it in their pocket and no law enforcement in that state can arrest them or question them over it, as it is the Right of the People to be Armed with concealed carry without a permit.

Contrast that to Gun Control Donald who can not have an event happen without him spouting off about confiscating guns or banning affordable import firearms.

Governor Noem moved for her constituents in making scholarships available for homeschooling. Yes South Dakota is a state which advocates parents teaching their children at home and supports them.
In addition, South Dakota is gaining control of wind energy in the state from out of state intrusions.

Imagine a place in America where the Governor is being an American and advocating for Americans. Yes there are such places and North Dakota, Wyoming and Nebraska are of the same freedoms. 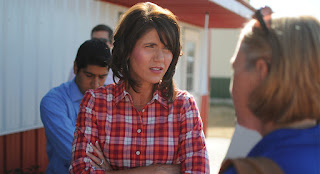 There was nothing slow about the start of 2019.
Already, I've been pushing legislation that will make our state stronger.
We've had a lot of wins already. I leveled the scholarship playing field for homeschool students. I signed constitutional carry into law - strengthening our 2nd Amendment rights. I approved wind power legislation that will give an undeniable boost to South Dakota’s energy industry.


The Governor moved next to produce a wildlife MANAGEMENT program in appointing actual farmers and ranchers to the wildlife board. No protectionism and no special interests are in charge of game management under Governor Noem. She is a leader who is getting things done in restoring the quality of life from that mutard Obama supporter Dennis Daugaard who was nothing but special interest.


Travis Bies is a third-generation commercial cow and calf producer from Fairburn.

Bies says his experience as a rancher has given him perspective on how wildlife and ranching are integrated.
“Every day we see mule deer, whitetails, prairie dogs, birds and more. Seeing wildlife on the ranch is a sign that we’re managing our resources properly, not only for our livestock, but also for the wildlife and the next generation of ranchers and outdoor enthusiasts,” said Bies.


This is the kind of leader Republicans need in local, state and national politics. Republicans do not have any of this in most states and certainly not in the federal level of the DC regime.

Each of you forget what it is like to have politician keep their word and not lie to you in voting liberal every chance they get as Donald Trump has shown a pattern of doing. I am reminding you that Governor Noem in the best traditions of President Theodore Roosevelt and President Ronald Reagan is keeping her word and representing the best of America in protecting her people.

I am sorry for states and provinces in North America who do not have this, but perhaps it is time that the Noem Doctrine become the judgment in which all Republicans are judged and if they do not pass the test, it is time for the base to unite, have a coming to God moment and make the GOP what it is supposed to be, instead of making excuses and accepting the Mike Pence mafia and the Donald Trump New York Valued betrayals.

Maybe it is time for the Board of Citizens of the GOP base to start discussing how to use Mr. Trump's favorite phrase in "YOU'RE FIRED" and hire someone who will establish the Noem Doctrine.

From what I hear, the people of South Dakota are delighted in their Governor and will not share her as President, so we will have to look elsewhere, but this post is about training you to know that there are Republicans who keep their word and are Conservative.

It is time American Republicans only accept Dakota Values as who a Republican is. 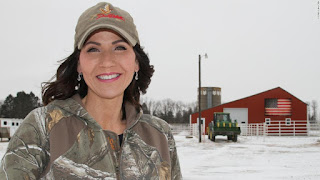