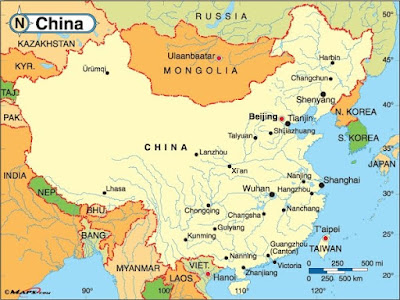 
In studying the statements of the United States Secretary of the Army concerning Donald Trumps super cannons to be directed at China, a  false read appears to be generated in the scenario, for the SecAm notes that the Army will pulverize Chicom installations and base in the PLA, which will then allow the Navy to produce landings on Chinese real estate. This is all World War II thought as the mindset is from a vintage era when amphib landings were the cutting technology.

In the Lame Cherry White Statement for the President's consideration, as it does not require a detailed analysis of this flawed big cannon doctrine followed by small gun landings is that the Chinese have a history of expending forces in fodder exercises. The Chicom at Yalu against MacArthur to the Soviet at Stalingrad against the Reich, both produced horrific casualties not on the America or German side, but on the Asian side. The Asian mind believes horrific sacrifice is acceptable because Asia has more people than resources. One uses the people to burn out German or American  technological expensive military doctrine.


Consider for a moment an American landing at Shanghai, utilizing Marine forces from Okinawa Japan backed by America Army from South Korea in a multiple beach landing from south to north to overwhelm, the now disabled PLA forces and supply due the American super cannon.

We have a Normandy situation in all is going well. Adolf Hitler in being deceived waited too long to deploy counter forces and the beach head moved to the hedge rows,  where even denying the allies ports, as the allies built their own port landings ,only delayed the defeat of German West.
What if  Adolf Hitler though had battlefield nuclear weapons and the Asian mentality of Fodder Effect? What if the Reich blew up the landing fleet off Normandy, what if Hitler did something he would not do in blowing up Normandy with his Landers on the beaches fighting Americans?
It would have ended the US foothold in catastrophic defeat.

Move  this to China in Peking noting several beach landings by Americans which can not be stopped, and the Chicom response is to nuke their own cities where the PLA is, with plutonium or cobalt  which would Hiroshima the Marines landing.

This would not be a direct nuclear assault upon America or their forces. It would be deemed a "blowing of a dam and flooding the plain in killing all those in the theater" which is acceptable military doctrine. Peking could defeat a beach landing by the Americans in this order of battle and in that recoiling, actually with hypersonic missiles destroy the landing fleet the Americans would deploy.
No Marines on the beaches, a reduction of the US military forces by a 25% nuclear attrition, the elimination of landing craft, and the war would be set back 2 years as the US has a small industrial production as it is all now in China.

Expand  this out, and what American President would allow the Pentagon ever again to deploy a landing from the sea with a nuclear power who would sacrifice millions in a 100 million man army to kill several hundreds thousand Americans on the Chinese beaches? Any location the Americans attempted entry into China would be struck with tactical nukes and the reality would be China would claim they have every right to use atomic weapons on their own soil to protect themselves from invasion.

This dynamic of warfare has never been discussed in public or private forum as it is a war game of Doomsday Defense in which there is not any offense which would be able to overcome it. Unless American set foot in Berlin or Tokyo the war was not over. If all there would be is American ash piles of bodies on China beaches, no amount of strategic bombing would ever vanquish China, because China would always win as it did in Korea and as the Soviet did on the Eastern Front.

Nuclear Warfare and Deployment is one of my specialized fields which I created along with Forensic Psychology, to educate and challenge doctrines with false conclusion driving them.

This has been a Lame Cherry White Statement which must be considered in American Big Cannon Little Landing Strategy, as there is a definitive check to this American Doctrine as much as Vietnam was a check on  American firepower.