This Just in from Jared Kushner 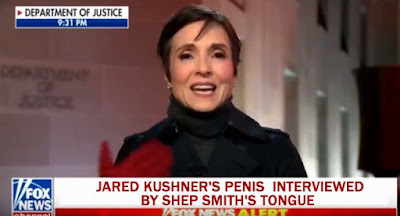 
With the interesting correlation that as soon as this blog started posting net sources, that the Robert Mueller Investigation was looking for the MISSING LINK in Pissgate, that the Protector of America immediately shut down his investigation, and his key Jewish investigators led by Andrew Weisman suddenly went looking for a job, something most interesting is now developing from Kushner Media which has been pushing information to Cuckservative Treehose, in the return of the Inspector General Horowitz report which started all of this.

Sunprancer cross posts all of his Kushner leaks as E Pluribus Unum at Free Repub, Crookophilia, Glockspeak and wherever for net traffic for that sorry site,  but in what the Prance has been trying to gain traction with from the sources directing him out of the White House, is what IG Horowitz has been up to, and this all is now reconstructed from FOX New's Catherine Herridge.
Herridge is stating two basic points in leaks from James Comey, the hidden texts of Lisa Page, Andrew McCabe and Peter Strzok. (Strzok's new Twit account is noted to be following Jewish #NeverTrumper Bill Kristol of Jewish fag billionaire Paul Singer who started all this Pissgate dossier frame up, and it is Kristol's son in law who is the one who runs the Free Beacon which Singer funds, and it was the son in law who hired Fusion GPS.)

Are you picking up in this Lenten Season a real Gefilte Fish flavor in this?

https://www.thegatewaypundit.com/2018/06/wth-ig-withholding-additional-anti-trump-text-messages-from-lisa-page-to-andrew-mccabe-from-public/
Inspector General Horowitz admitted in a Congressional hearing there are additional anti-Trump text messages from FBI lawyer Lisa Page to her boss Andrew McCabe that have been withheld from the public. Horowitz also disclosed there are additional text messages between the FBI lovebirds Lisa Page and Peter Strzok that still have not been recovered.

https://www.pacificpundit.com/2018/06/18/ig-horowitz-withholding-more-anti-trump-texts-from-lisa-page-and-andrew-mccabe/
IG Horowitz withholding more anti-Trump texts from Lisa Page and Andrew McCabe. Inspector General Michael Horowitz revealed in a Congressional hearing in front of the Senate Judiciary Committee Monday there are additional anti-Trump text messages from Lisa Page to Andrew McCabe that have been withheld from the public. Inspector General Horowitz...

https://bigleaguepolitics.com/texts-strzok-admitted-withheld-hillary-clinton-information-congress/
TEXTS: Strzok Admitted That He Withheld Hillary Clinton Information From Congress. Here is one of Strzok's text messages to his paramour Lisa Page, an FBI lawyer. The FBI reported that many of their text messages were lost, but the inspector general Michael Horowitz called the FBI out on their nonsense, saying that he already had the texts.

You are seeing something coming out of the Kushner media from the White House. Herridge is being leaked to. Sunprancer has a heads up to push the story line in how that site spikes stories by cross posting, and if you have not figured it out, Google and all the other search engines have been nuking Conservative links on their search engines from that fine Jewish establishment funded out of the NSA, and yet Cuckservitude Treehose comes up in a myriad of links.
Do you realize the kind of insider power backing that kind of Mockingbird information flow? The same kind of power that Jared Kushner who is dirty as hell, has known crimes, tried to frame Don jr. in that Trump Tower meeting, and Robert Mueller shuts down the investigation by his top Jewish hitman, and Jared Kushner is not charged with one crime. Almost as if he was given immunity as a cooperating witness.

Now back engineer this off of Sunprancer's comments as this is the real story in all of this. The Prance appears, feeding off of Jewish owned FOX news, a reporter with leaked information from a Jewish Inspector General, and it is picked up by Jewish Kushner Media for the internet. Again, if you are intelligent in going beyond all of the Mossad brainwashing that you can never type the world "Jew" without being an anti semite, that something in this has that fish flavor.
Soon enough you are going to become aware of the term SAYUM and KATSA, and the anagram AI. They will mean things in a future tense which will clear your brains of the static fuzz, as you begin pondering a reality which is not so Twilight Zone.
Jewish FOX, Jewish Kushnerbird, Jewish Inspector Generals, Jewish Mueller investigators and Jewish #NeverTrumpers, as Jews are being forced out of the DNC for the Trump RNC socialist party being eradicated of Conservative White Protestants.

It almost appears as if a Neocon Jewry which backed Birther Hussein had another faction go to war against it, utilizing Donald Trump, and it suckered a number of rich Evangelicals to be cover for it, as the dossier was being created.
I have alone told you that this is beyond what you ever can comprehend in how deep this is, how professional it is, as this is the adults running this operation on a myriad of levels, so your right brain has no idea what the left brain is thinking.

I do not want to leave the impression that when I say Kushner Media, or mention President Trump, that they are some overlords running this. For those who do not have their heads up their asses and have been reading this blog, you know more than the Dad in law and Son in fishy scents know. They are fronts for the adults, just as British MI6 is the front for what was really behind all of this #NeverTrumper frame up.
Donald Trump became a Nazi, a National Socialist to be pitted against another CIA asset in Alexandria Ocasio Cortez to birth that Obama party into existence for 2002 AD in the year of our Lord. This is all connected and the Trump Nationalist of 2016 became by 2018 the Trump Socialist of this order.

Prancer is extremely clumsy in this, but that kind of sloppiness is due to lack of respect for his jarhead audience, but it allows for the tracking of the revelations in who is being leaked to and what is really taking place behind the shadow curtain.

I alerted you to Trump State was on the move.

You are watching the moulding of the United States into a new form, and Donald Trump is not the sculptor, but just more mud on the wheel like you and I.

Pay attention to what appears  here and you will have most of the answers. I though will not be naming the hands behind the shadow curtain as I do not want to end up dead or worse. Their puppets though are in the media and will tell enough of the story to reveal what is missing at times and who it is linked to.

Just remember, this blog mentioned the Missing Link and the investigation shut down. The President will not appreciate it and his portfolio clappers will not show the appreciation either for all I risked as they sat on their asses pretending they were the patriots and they were the ones who did all of this.