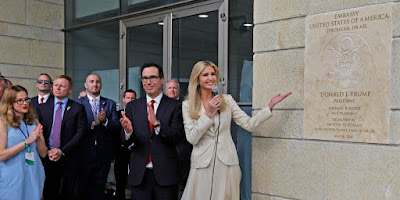 
We are about to witness just how "Thy Jewish Keeper" that Donald John Trump is. I will not reveal how this blog arrived at these trends, but there is enough online evidence to note that there is a power play taking place in the Jew state, and that alone should alert everyone that a man as powerful and established as Benjamin Netanyahu is being leveraged, that all is not well in Tel Aviv.


Netanyahu is in trouble and that is why he appeared in Washington DC to suckle at the teat of Donald John Trump, and the reason that Donald John Trump just stole Syrian land and handed the Golan over to the Jews. Don John is trying to buy the Jew vote for 2020 and keep Jared Kushner's bed chum in power, so that Jarvanka's peace plan which has stalled, will make the Princess happy and not on perpetual PMS.

https://www.jpost.com/Israel-News/Politics-And-Diplomacy/Report-Mossad-undercuts-Netanyahu-warns-US-Congress-against-more-Iran-sanctions-388535
Report: Mossad undercuts Netanyahu, warns US Congress against more Iran sanctions. Lawmakers, who say they fear Obama administration negotiators may not take a hard enough line with Tehran, are also at work on a separate bill to have Congress approve any final agreement on Iran's nuclear program, Senator Bob Corker, the chairman,...


Netanyahu has been in trouble for some time, as the Mossad has been engaged in a coup against him. The denouncing of him, the humiliating of him was just the start a year ago. It culminated in the Mossad leaking criminal information on Netanyahu to bring him down.

The question in this is what Mossad's problem is with Netanyahu.

Ex-spy Chief Said 'Fun Part' About Mossad Is That It's a ...

https://www.haaretz.com/israel-news/.premium-netanyahu-responds-to-ex-spy-chief-mossad-is-no-crime-organization-1.6138956
Ex-spy Chief Said 'Fun Part' About Mossad Is That It's a Crime Organization. Netanyahu Is Not Amused. "I never asked [Cohen] to listen in on the Israel Defense Forces chief of staff or the head of the Mossad," Netanyahu tweeted in Hebrew early Friday. The Prime Minister's Office has also denied the report, saying that "Netanyahu never asked to listen in on the chief of staff and the head of the Mossad. This is an utter lie.".


According to Victor Ostrovsky in his By Way of Deception, the Mossad is controlled by no one. It is a series of fiefdoms which deals in arms, dope and sex. It does not submit to any Prime Minister, and in the case of Itzhak Rabin, they brought him down with criminal leaks and when he gained power again, they shot him, and blamed the right wing in Judea for it.

Benjamin Netanyahu is not Mossad. He was connected in special operations to AMAN, which is the intelligence wing of the IDF. Not Unit 8200, the Signet corp of electronic warfare, but the actual hands on, that got his brother killed at Entebbe in the 1980's.

For the Mossad to moving on a coup against Netanyahu, with Trump in power, signals more than when Bill Clinton toppled Netanyahu and installed leftists which in turn ripped the Likkud apart under Ariel Sharon, who was a pathological psychopath, which took Netanyahu decades to rise to power again.
Mossad's motives are always about a Prime Minister overseeing too much as with Rabin, or they have a better money laundering deal from someone.

That part you had better pay attention to as Christian hating faggot Matt Drudge is not going to inform you of those things. Someone is involved in toppling Benjamin Netanyahu, a man who used to sleep in Jared Kushner's bed, and is the darling of Donald John Trump.

Now comes for the Lame Cherry exclusive in things I know that you do not know. What you have taking place in Tel Aviv is someone is moving to get rid of Netanyahu and they have the Mossad engaged in the operation against the United States.

Enter the favorite son of this blog in Chancellor Sebastian Kurz who has been crossing all the T's and dotting all the I's for over a year as the King of the Jews. It does not matter that Sebastian Kurz is glad handing Netanyahu nor pledging the Europeans to be protectors of the Jews, what matters is that there is only one power source which is combining in operations all across Europe in the Jesuits of the Vatican, along with the emerging Habsburg Dynasty. They want Jerusalem and they now for whatever monetary and power reasons, have the Mossad running a coup, and a new military general in the wings to do the bidding of the Vatican, Vienna and the Mossad.

It will be interesting to see if Donald Trump can protect his Jew in Tel Aviv, or if he is about to have Jared Kushner on the outside looking in, in his peace project. I do not know anything about what the Mossad plans are, and do not care to know, but will remind readers that when the Mossad wants a Prime Minister gone, or a President, they get gone by lethal means or impeachment means.

This will be a test of Trump, but if he is able to buoy up Netanyahu, Netanyahu is an old man who is a political cripple, who will be of little use to the United States in Kushner Pax.

As horrid as Birther Obama has been in the internecine Muslim warfare, Donald Trump has had America stabbed in the back by internecine Jew warfare. 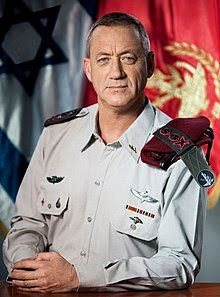 
What is rising in the Jewish state is an alliance between General Benny Gantz and the Arch Moderate Yair Lapid. Both are melding an anti Netanyahu policy of the Oslo Accords in form, where there would not be a two state solution to Philistia and Judea, but an "entity" in the West Bank which the Philistines would be held as a sort of Vichy Bank.
They are moving for negotiations, and in this is the foundation of the leveling of Gaza and dealing with Hezbollah in Lebanon.  This is the type of war that Chancellor Kurz would benefit from in European protectors in control of the Jew State and the Entity State. 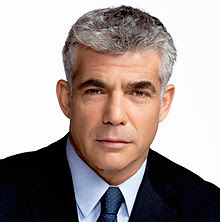 What is vital to focus on in this is someone put Gant and Lapid up to this, and it is European, and they were moving hard before Jared Kushner could establish a peace that Mossad could not profit nor power over. That is the state of the Jews.

In witnessing Sebastian Kurz and the Mossad in action on one side with Jared Kushner and Donald Trump on the other, logic would dictate that Kurz has already won this as this progresses forward as slum lord Kushner is a lightweight that the American President should not have put his trust in.


You have now been informed of what the situation is, and realize that both Likkud and the anti Likkud both want war with Iran by the United States for Greater Judea. 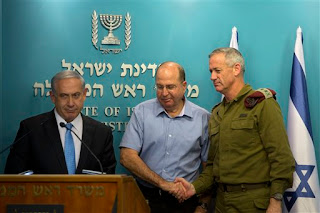 Whatever happens, all that is happening now, is due to the hapless intrusion of Jared Kushner into "Middle East Peace" in the people whose interest is war, are being cut out of the deal. What is about to take place is Jared Kushner's fault and responsibility as he blew the initiative for 2 years and now forces are moving in a coup and to establish their own fiefdom, excluding the Americans.