This expose on HAARP weather modification will be technical, but I will keep this simple so the reality is not lost in the data. The short version of what you are looking at is the ARCTIC WEATHER DOES NOT MATCH THE JET STREAM.

The point in this is it requires cold air out of the Arctic to create 20 below zero temperatures over Bones' Watertown South Dakota which is our focal point as this is the region which HAARP has based all of these weather bombs to trigger off of while east Texas is the area which is the southern weather creation point.

OK to explain this, we start this on the data on Thursday evening or Friday morning. In the above Jet stream GIF, you can watch the jet west to east as it has been for weeks, meaning most of the United States in the north should be thawing in 30 to 50 degree temperatures and not the below freezing temperatures which America is being terrorized with by HAARP.

All is well until Sunday March 3rd as the below map reveals, in out of nowhere a High Pressure current forms over the Canadian Northwest Territories. You can see this is aimed south southwest.
I have marked it with a RED CIRCLE. 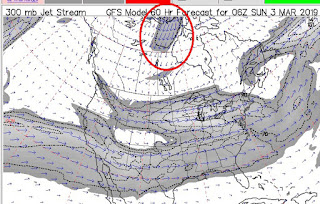 By day four or, Monday, March 4th, I have marked the stream in RED and you can see the top part is aimed southwest, but the East West Jet is so powerful in flow that it literally arcs this stream 45 degrees, so it is not hitting Montana, but is pouring into Minnesota.
By day 4.5 on March 4th, the Arctic jet has straightened out into pouring air into North and South Dakota.
Pay attention to this as the next slide of the temperatures over Watertown, South Dakota 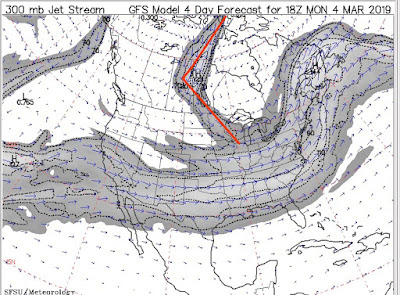 I have marked Day Four in RED and this is vital to catching HAARP modfucking as the weather does not match the temperatures.

The big Arctic cold weather of 20 below zero occurs in the forecast on SATURDAY. Yet on Sunday when the air flow is moving into Minnesota, South Dakota is already WARMING UP to 9 below zero.
On Monday when the Arctic jet is over the Dakotas, the temperature is already ABOVE ZERO.

So you tell me how the weather over the Dakotas is WARMING WITH ARCTIC AIR POURING IN and it cools off to 20 below with air having been fed from Washington State, which is not 20 below. This cold surge pocket is centered over Billings Montana out of nowhere.
Nowhere if you follow the lines is Calgary  Alberta which has become the center of this cold after I mentioned it was 40 degrees above zero when Watertown had colder air than the Arctic a few weeks ago when this all started.
If you follow the curl in the first GIF, Calgary Alberta is having air pulled off Hudson Bay for their "arctic cold". This is one hell of a meandering air current to get a few more billion dollars out of Canadians and Americans to heat their homes to pay Saudi Muslim loans out of Citibank. 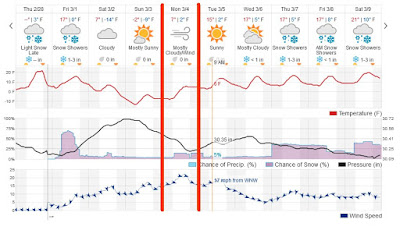 This HAARP created Northwest Territories jet stream bomb is moving at 123 miles an hour. That is quite high as the average jet speed in the West East jet is moving around 70 miles per hour. That is how they created this last "arctic blast", but the HAARP bots have been predicting by Mid March which is next week, that the weather will begin moderating, not to normal temperatures, but the sun is moving north with such warming power now, it is overcoming HAARP's ability to keep the air frigid.

What must be remembered in this is the actual data as it does not match the forecast. The cold does not match the jet stream. Therefore the cold is being generated by other means in a lower level flow of air or atmospheric air flip that is tracked out of Hudson Bay, west to Alberta, south to Montana, then east to Minnesota. There is not an upper level LO PRESSURE generating this, but that is what the air flow moves in surge. Again it does not match the weather, as when the Arctic Air appears the temperatures warm up 15 degrees. That can not happen and yet it does.

I have told you that people have been reporting for the past two years and the data shows that when the winds blow from the north, the air warms up over the northern United States and when it blows south, the temperature cools off.

That is HAARP in Weather Modification. This is the first time this has been exposed. It stunned me when I came upon this odd surge appearing, and then discovering it does not match the forecast as the cooling takes place before the Northwestern Territory air appears over the central United States.

One would think this would be the greatest story on fringe media radio and on mainstream media, and yet not a word or mention of this, as the Mockingbird is censoring any mention of this. These are actual NOAH data and there is not any denying any of it. HAARP has been exposed in action as the weather does not match the cold air flow. 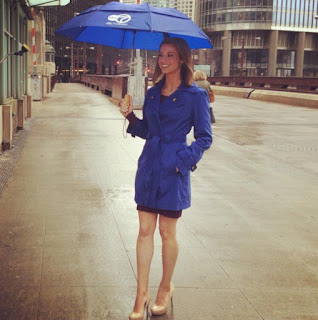