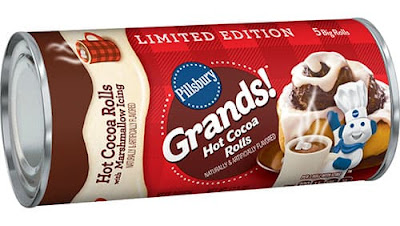 Sandy kindly sent this to me for the Viking a few weeks back, but I was saving it for posting now as I am informed that ankles are not hips, and they certainly are not in replacement, as one is bone on bone, but an ankle is just there with the horse hoof below.

That is what always puzzled me about God. He puts hoofs on critters or pads on cats, but people just got stew tissue down there which will never cook up  tender. I am reading about Tonkawa Indians of  Texas in their culinary choices of Comanche on the barbie.
In one story the Comanche cut off all the limbs of the Tonkawa tribe, and roasted them alive. Troubling account of the Comanche noted the people without limbs moved like worms off the hot coals and it was a delight to them to hear the hide burst. Yes it was not skin, but hide like an animal in the description.

Not exactly fluffy crust Minnesota doughboys, but the story is both in printed and posted form.


It is with the saddest heart that I must pass on the following news:
Please join me in remembering a great icon of the entertainment community.
The Pillsbury Doughboy died yesterday of a yeast infection and complications from repeated pokes in the belly.
He was 71.
Doughboy was buried in a lightly greased coffin.
Dozens of celebrities turned out to pay their respects, including Mrs. Butterworth, Hungry Jack, the California Raisins, Betty Crocker, the Hostess Twinkies and Captain Crunch.
The grave site was piled high with flours.
Aunt Jemima delivered the eulogy and lovingly described Doughboy as a man who never knew how much he was kneaded.
Doughboy rose quickly in show business, but his later life was filled with turnovers. He was not considered a very smart cookie, wasting much of his dough on half-baked schemes.
Despite being a little flaky at times, he still, as a crusty old man, was considered a roll model for millions.
Doughboy is survived by his wife, Play Dough; two children John Dough and Jane Dough; plus they had one in the oven.
He is also survived by his elderly father Pop Tart.
The funeral was held at 3:50 for about 20 minutes. 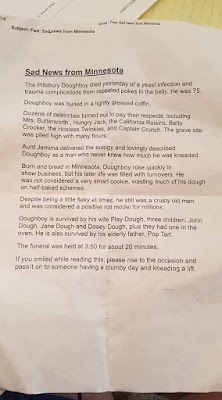