A Wolf At The Trump Door 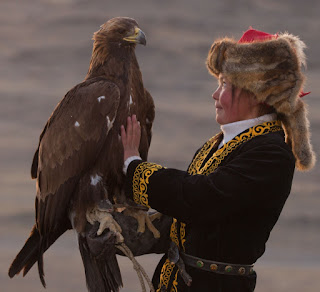 
As another  Lame Cherry exclusive in matter anti matter.


Apparently  Don and Mel are gearing up for the 2020 Presidential elections in more than Twitterages, as new photos have emerged in Trump Fam not just out going one better than Falconry, but Melania has taken up Eaglery with her Gamekeeper at the White House, Bunja from outer Mongolia, and an Asian Eagle she picked up in Vietnam as a gift from that sexy Kim Jung Un.

Apparently, Melania is thrilled over her bird of prey, in several times a week, she has been seen in the Virginia woods collect supper for the Trump's in grouse, turkeys, the odd beaver and something Barron has really taken to in hassenpfeffer ala oyster sauce.

What really captured my attention though was rumor had it the other night as Don jr. was over for a visit with his FOX fox, that a wolf was at the door, and threatening to eat everyone inside. Word had it that several Secret Service agents had their limbs gnawed off, with surgical precision as this Loup Garu II prowled about the grounds.

I am told that Melania grabbed her rifle, an exact replica of the one featured on the Lame Cherry which Osa Martin used to slay African game animals in the 1950's, but the President told her that being a woman, her duty was to protect Barron inside, and that he and Don jr would go out and take on Loup Garu II.


I was told that Don and Don scoured the White House back 40, front 80 and side 20's, but it was not until they reached the hinterlands of the Tiaga Forests which Melania Trump had just planted and hauled in snow especially for Merry Christmas, that the Trump men were beset upon by Loup Garu II. It was a savage fight of great quantities of ammunition were expended, but as the Trump's are billionaires, money was not an object.
It was finally a combined shot by Don and Don, with I am  told the President using himself as bait, that Loup Garu II was brought down.

Here is the photo that Melania took of her hunters as they emerged from the Tiaga Forest of the White House. 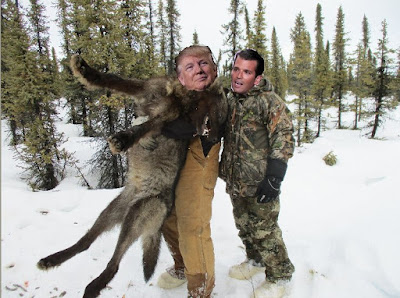 Always looking for the details which Lame Cherry readers would be most interested in, the wolf, Loup Garu II, weighed in at 180 pounds and was as tall as the President. The US Fish and Wildlife deemed the wolf an endangered species and attempted to ticket the President, but the Secret Service in losing 3 limbs of their own, immediately gunned own the USFW personnel with tranquilizer darts and they were shipped off to Alaska and were recently eaten by wolves who gnawed through the fabric of their wall tent.

In further details, the guns the President and Son of President were using were expensive lever action big rifle rifles in super 45.70 Winchester. shown here.
At almost 4000 dollars per rifle the Trump's invested well in the killing of Loup Garu II.

Don jr. actually brought the super 45 70 to the President's attention, when he literally brought home the bacon this past summer, as Melania Trump had planted a Palmetto Swamp Jungle for Barron to do nature studies in, close the White House east wall, and it was here one evening on a stroll with his fox from FOX, his super 45 70, that he bagged a ferrocious wild boar which tusked down on them.
The Secret Service reported that John Kelly, while still at the White House, had come running, screaming out of the Palmetto for everyone to run for their lives, but Don jr., walked up and said, "Don't worry pilgrims I will save you" and with that put a slug into the wild boar and saved thousands from bodily harm. 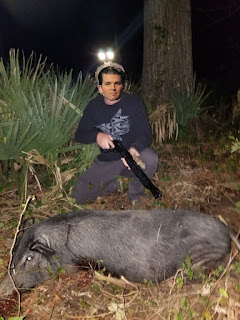 
Here is a photo of Don jr's personal big bore firearm which the President also has along on his trips outside of the White House, as it is a take down version and the President really enjoys that part, and has started to be called Bully Don by the White House staff as his new nickname in honor of Teddy Roosevelt.. 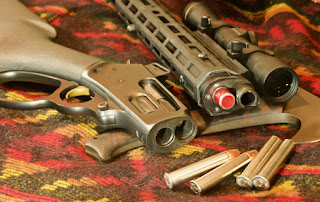 Donald Trump's Big Bore 45.70
This is called the Bully Gun in the White House.

The Lame Cherry is pleased that the White House 2020 Elect the President Committee or RED, Re Elect Donald, has passed on these exclusive photos and the story behind them, as the Lame Cherry is always pleased to do whatever it can to put this President back into the place he has fulfilled so very well. 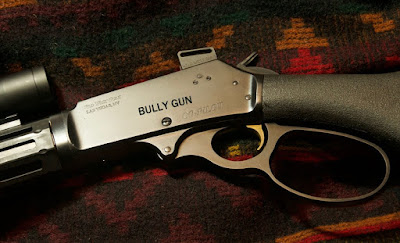